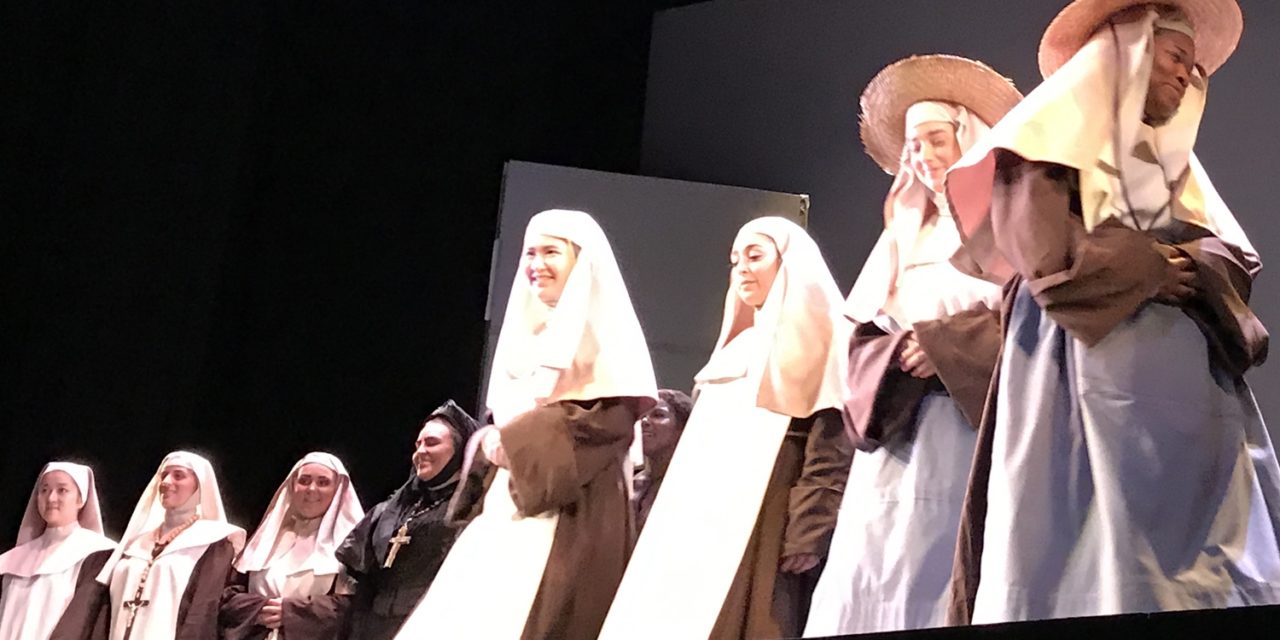 Suor Angelica takes place in a convent  towards the end of the 1600s. A statue of the Blessed Virgin that the nuns pray to is a central prop of the sparse set design. The opera begins with La Suora Zelatrice doling out small penance to nuns who got distracted by pleasures during prayer time; the tolling of distant bells is evoked in the orchestra as if to call the novices back to a prayerful state. The scene evolves to the nuns discussing informally if they have wishes. The types of wishes that the nuns do admit to are innocent enough, for example, to see a lamb in person. As the nuns chat on about their wishes, Sister Angelica says she has no wishes. The other sisters gossip good-naturedly that she is lying as they all know she wishes to see her family again. All the nuns know about Angelica’s past is that she was banished from a wealthy family that never visits. The quiescence of the scoring changes here into tumbling music expressing the young nuns’ animation in conversation: It brings to mind music from the silent movie era. As William, reviewer for Opera Warhorses, noted in a review of L.A. Opera’s production of Suor Angelica directed by William Friedkin  in 2008: “The soaring orchestral interludes that follow (Suor Angelica’s first aria) demonstrate that the music of Suor Angelica can be considered a precursor of the symphonic scores for cinematic films that came to be recognized as an important part of movie-making a dozen years later.”

A darkness enters the music with low pronouncements from the woodwinds and strings as La Zia Principessa, Angelica’s aunt, arrives. Puccini makes use of the darkness and power of a dramatic mezzo-soprano, as well as slow ascending lines from low notes, to convey the extent of La Zia Principessa’s increasing anger. La Zia Principessa makes it clear to Angelica that she believes Angelica should live out her life in penance for having borne a son out of wedlock and disgracing the family’s name seven years ago. She is only visiting Angelica to persuade her to sign a legal document to give up her inheritance to her sister, who is to be married. Angelica pushes her for news of her son as a condition to sign the document. La Zia Principessa informs her that he died of illness two years before. Angelica’s lament now musically traverses the many emotions she journeys through, starting with a minor key to express anguish. After Angelica swallows a poison potion to kill herself, and, according to church doctrine, commits a mortal sin, she prays for mercy to be allowed in heaven so she can be with her son; the love of her son was the reason behind her suicide. Angelica’s anguish changes to a hymn-like major section, as she experiences rapture at the vision of her angel-son, and finally, funereal rhythms as he beckons her to join him in heaven.

Puccini used a larger orchestra than might be imagined for an opera of all women’s voices (mostly mezzo-sopranos). In addition to the use of harp, celeste, and glockenspiel, there are the dramatic and subtle moments that call for the use of four trombones or triple woodwinds. He used the additional wind colors to paint the many and ever-changing moods of this short opera. The Prelude to Performance pit used a reduced orchestration, while an orchestrator expertly replicated many of these colors with the use of muted brass. This solution allowed the seasoned orchestra players to communicate beautifully the composer’s intentions. These nuances in the opera are, in turn, expertly interpreted by the cast in the Prelude to Performance production.

Entrenched cynicism of a narrow society represented in Suor Angelica by the insidious La Zia Principessa is transmogrified for comic effect to Buoso Donati’s relatives in Gianni Schicchi. Wealthy Buoso Donati lies dead in his bed while his relatives surround him and cry fake tears over his death. The fake tears only become real once they realize Donati left his fortune to the Church instead of to them in his will. Rinucciou (played by Spencer Hamlin) advices his relatives to seek guidance from Gianni Schicchi, father of Lauretta, the woman Rinucciou loves, about how to attain Donati’s inheritance money for themselves. Rinucciou’s Aunt Zita (played by Leah Marie de Gruyl) was against Rinuccio marrying Lauretta, due to Schicchi’s commoner status and Lauretta’s lack of dowry, but the family reluctantly agrees to confide in him.

There were many fine moments in this production of Gianni Schicchi. The expression and stagecraft put into the character work was delightful to watch; the visages seen on stage might well have been paintings of buffoons, clowns, or simpletons. Joshua DeVane is a convincing Gianni Schicchi. He does a wonderful job of shifting from his impersonation of Buoso Donati to deceive the lawyer, to his own voice to remind Donati’s relatives that to expose him, is to expose their own criminal plans as well. A masterful moment of comic awkwardness occurs when the lawyer’s witness (played by Charles Carter) expresses his heartfelt condolences about Donati’s passing, unaware that the family members present are secretly fuming because Schicchi had just stolen from them the inheritance they had planned to steal from the church.

Puccini based the character Gianni Schicchi on a villain sent to hell in Dante’s Inferno. Hamlin as Rinucciou and Anna Adrian Whiteway as Lauretta convey successfully that it is love that motivates them to be on board, peripherally, with the family shenanigans. It is Rinuccio and Lauretta’s charm as a couple that gives Schicchi’s final plea to the audience not to damn him to hell for his connivances (as Dante had done) its credence, since he actually used the inheritance money to give Lauretta her dowry.

The set design for both plays included majestic architecture projected to the back walls of the stage. In Suor Angelica, the back walls projected at first the walls and windows of a Catholic church, and then stars once Angelica once learns of her son’s death. A view of Florence reminiscent of the 1200s graced the back wall of Gianni Schicchi. While projected landscapes risk appearing too modern a set design for classic operas, they gave Puccini’s two bold one act operas a compelling, experimental twist.

This post was written by Susan LaFever and Heather Waters.