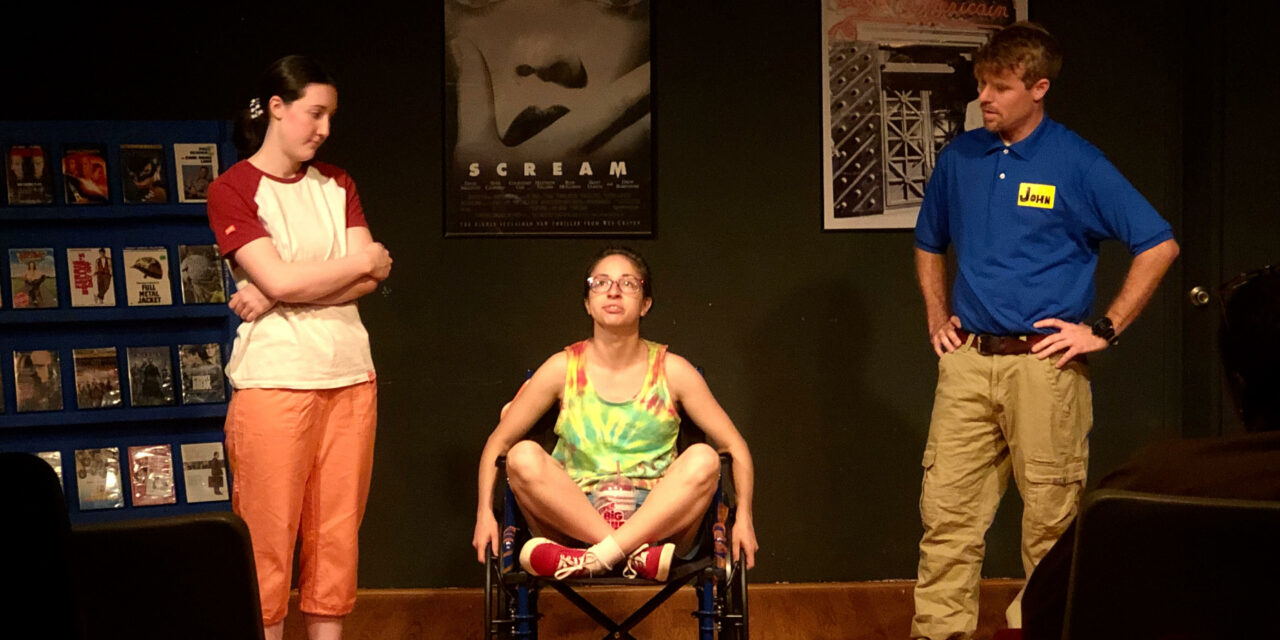 Be kind.  Rewind.  Words stuck to every VHS tape during that golden age in America when video stores were king – until DVD’s took over, that is.  Writer/Director Thomas J. Wortham takes those of us who remember that time on a walk down memory lane and introduces the concept to those in the audience who might not have experienced it with his play An American Video Store at Hollywood Fringe Festival.  Like Jones, the Narrator, Wortham introduces the three acts that take place in a Blockbuster Video over a period of 14 years.  He gives us the history of the store and its founder David Cook and for a moment, it was tempting to fear we were going to be watching that story but no, we are invited to visit a chain in what feels like the middle of America and meet the people who work there.  Each time Jones appears to tell us about the time we are about to visit he lists off the price of gas, a couple of newsworthy events and the number one Billboard song of the year, which he rejects in favor of a different song that feels more relevant to the story.

In the first part, it is 1998, gas is $1.15 a gallon, Clinton has been impeached and he prefers a Lauren Hill song over a hit by N.E.X.T.   Sisters Leah (Aidan Rees) and Rachel (Kristin Morris) attend the Grand Opening of their local Blockbuster owned by John (Jeff Coppage).  Rachel is in a wheelchair and suffers from Duchenne Muscular Dystrophy.  She has been told she doesn’t have long to live so she speaks her mind, swears like a sailor and all but outs her sister Leah as a lesbian.  Both are astonished to find the store only has DVDs available – no VHS tapes anywhere.  John feels for the siblings who are not able to afford the $600 it would cost to buy a DVD player so he offers them one that he has in the store and they promise to be his best customers. 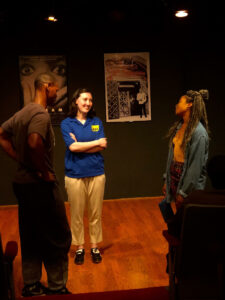 Act Two begins six years later in 2002 when gas cost $1.85 a gallon, Al Gore lost to the George W. and Jones picks a song by Andre 3000 over one by Usher ft. Lil’ John.  Now a teenager about to go to college, Leah works for John.  Rachel has passed away.   A panicked babysitter named Grace (Misao McGregor) begs Leah to help her with a stack of DVDs she promised to return to the store months prior.  There’s a bit of a spark between them so Leah lets the fines go unpaid.  Preparing to leave for the day, she lets Alesia (Angelique Maurnaé) and her boyfriend Troy (Antoine Dillard) into the store to look for a movie after they beg her, desperate for one.  This is where the nostalgia kicks in for no matter how old you were, no matter what kind of group you were renting for, there was always a debate over what to watch that particular night that seemed so much more important than it maybe should have been.  It was special, you were picking something that you were going to pay for that you could only keep for maybe two days, depending on the rental type and the store.  You were carving out time for this, it wasn’t a random event in our daily lives, and the choice could make or break an evening.

Though the couple considers many options and ultimately take Leah’s advice to rent Do The Right Thing they end up not getting a film when their friends call to let them know they already chose one from what sounds like Red Box.  After they leave, John celebrates Leah’s graduation with some sparkling grape juice, credits her for the store’s success, then turns the conversation into a bit of a strange area when he admits how much he loves her, but not romantically.  He wants her to stay, offering her a raise and a manager position.  When she leaves he will go back to being alone and he doesn’t want that to happen.   The script goes the extra mile to try to make sure that this doesn’t come off as a perverted older man falling in love with a younger woman but there’s still something that feels a little bit off about the exchange.  Leah accuses John of living his whole life through the movies and though he does share his knowledge of them, the script doesn’t succeed in making that aspect of his character clear.  He doesn’t live by movies, quote them constantly, anything that might indicate that. 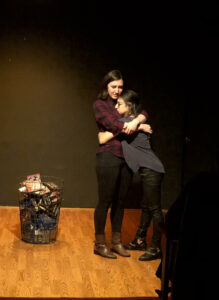 Act Three begins in what Jones calls ‘the worst of times’.  He gives us the history of Blockbuster’s downfall before bringing us to 2014 where a gallon of gas costs $3.36, Mitch McConnell and the Republicans take over the Senate and he rejects hit songs by Pharell, Taylor Swift and Bruno Mars before settling on by Adele that sets the appropriate tone.  Troy comes to the store where everything is for sale now.  When Troy admits that he ‘used to think the little fights we would get in were, you know, charming or whatever, but I guess eventually the charm wore off.’, his memory of that relationship with Alesia has the power to bring back every fight we might have had with the people we were renting with and with that comes a surprising surge of emotion.  Leah comes back to visit with her girlfriend Grace – the babysitter from years back.  She and John reconcile.  When he leaves to answer a phone call, Rachel walks into the store to explain to Leah that she always treated Rachel so badly because she didn’t want her to miss her as much as Rachel knew she would miss Leah.

In this scene, Aidan Rees and Kristin Morris offer the viewer some really beautiful work, both open and vulnerable without falling to melodrama.  It’s hard not to feel for both of them, no matter how hackneyed the ‘visitation from beyond’ device might be.  It might have worked even better if it felt like Aidan as Leah was the one that conjured up Rachel, not vice versa.   John comes back and he and Leah get to say goodbye to each other.  Grace comes back for Leah and they head to the car for their drive home.  John looks around the store, takes off his iconic blue Blockbuster polo, and exits.  He goes back into the back office, he doesn’t leave the store, which feels a bit anti-climatic.  Jones does not come back, which might make us wonder what his role is in the play overall [besides giving us context and suggesting that Netflix might be listening – an aspect of the play that could be omitted without losing a thing].  Overall, the show delivered a deeper emotional payoff than one might have been tempted to expect at the start and it is an interesting exploration of that golden age in America – which is exactly what Fringe is for.