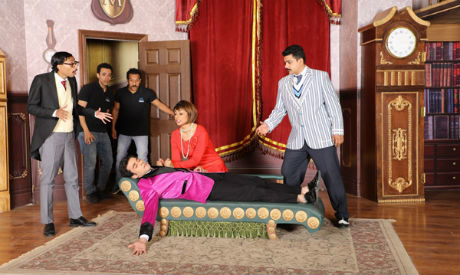 Directed by the famous comedy actor Ashraf Abdel-Baky, Crime In Maadi play surpasses any revival attempts in recent memory as it staged on the Rihany Theatre.

The Rihany Theatre has looked gorgeous since it came back to life, resurrecting the history of Emadeddin Street and attracting spectators from all walks of life to the old neighborhood of entertainment and theatre.

It was due to Crime In Maadi, produced and directed by the famous comedy and acting star Ashraf Abdel-Baky. Abdel-Baky established his own theatre company, Workshop, extending his career as a theatre director and producer.

A movie and theatre acting star of Abdel-Baky’s stature turning to theatre directing and producing is a major artistic event that should be celebrated by the Egyptian theatre scene. Training and employing a cast of 40 emerging actors is no mean feat.

Coupled with the financial responsibility of being the funder and producer of Crime In Maadi, Abdel-Baky’s endeavor far surpasses any revival attempts in recent memory. His passion for the stage is undeniable. He not only always speaks with love and gratitude of his theatrical beginnings, but also makes sure he never leaves the stage despite being in demand for television dramas and as a presenter of talk shows and artistic programmes.

Crime In Maadi is a translation of a foreign play, whose rights Abdel-Baky bought—setting an example for the piracy-rife Egyptian theatre scene—before holding an intensive workshop with his young actors in order to work on the script, provide training and “Egyptians” the play. One has to admit that Abdel-Baky is indeed a very powerful acting coach, having seen the outstanding performance level delivered by his cast.

Debunking the popular myth that emerging actors cannot carry a whole theatre production on their own without an acting star sharing the stage with them, the quality of the acting and the professional power of this play defy any corrupt notions of who should “carry” a show. The play has been successfully running for over a month, continually attracting new audience members without the presence of any known actor on stage.

It is created in intelligence both as a text and as a directorial debut. It is a real homage to the comic theatre, the kind of true comic theatre that does not resemble any of the more prevalent forms of stupid farce or variety shows. A comic theatre that worships laughter, and excels in fuelling the stage with numerous aspects of comedy supported by a high level of seriousness, professionalism, and creativity. Such comedy is worthy of a newly reopened Rihany Theatre, just as Abdel-Baky is worthy of being called a successor to the great comedian Naguib Al-Rihany.

The two-act play starts with Hashem’s death. His lifetime loyal servant Osman discovers his body laid out on the sofa in the living room on the night of his engagement to Souad Hanem. He has been murdered. All the events of the two acts will take place in the living room. The sofa will gradually become a central reference point for all the actors’ movements, the dramatic actions, and the scene changes.

Souad Hanem is called to the living room, so is her brother and Hashem’s best friend Raafat. The three characters, Osman, Souad, and Raafat remain the central figures of the play, together with the detective who, having shown up, quickly becomes the leading character in the thriller–or detective-style story.

But the genre device is merely an excuse for a comedy that invests in the actors’ carefully choreographed movement as the main source of laughter. Although there is a lot of well-crafted verbal comedy too, the actors’ movement remains the foundation of hilarity in the piece. The design of the movement even extends to what cannot be seen on stage.

Abdel-Baky’s team of actors is divided between the stage and backstage, and they execute all operations on, under and around the stage. It is the full notion of the actor being in charge of everything on stage, there are no technicians here, no workers or stage assistants.

All are actors, and all are moving the stage. This system can also be interpreted as challenging to the hierarchy within the theatrical division of labor, establishing a new style in production management that provides equality and equal responsibility for a team that cannot be divided.

In Crime In Maadi, the stage set and all physical elements are repeatedly moved. It is the only play you will ever see that is moved and transformed before your eyes. It is the one play where the physical elements of the play are as vital, dramatic and moving as the live actors themselves. We can even go so far as to say that those physical stage objects are as active and as live as the actors.

The reason behind this is that all the actions and movements of those objects (including sets, panels, floors, windows, etc) are operated by live actors. There is no machinery or automatic execution in Abdel-Baky’s cast, the operators are actors who take their cues from the characters and execute their actions as part of the script of the story and of the comedy.

While the verbal jokes and physical behavior of the characters do fuel laughter, it is the effects of the objects’ movement on stage that raises the comedy to an unprecedented level.

The spectators witnessed a freshness of live action and of comic style that they have never witnessed before. It seems as if comedy still has plenty of new aspects and effects to deliver, indeed as if comic theatre is being reborn, with the stage, the physical objects and material set now able speak and contribute to the comedy as if they were live actors.

The performance relies heavily on exposing itself as a performance. Like all kinds of meta-theatre, Crime In Maadi offers both the story of investigating Hashem’s killing and the parallel dynamics of the theatre team performing the story.

Most of the comic triggers emerge from those parallel dynamics, whether the set collapsing and the cast trying to manage the situation or the indirect narrative lines that provide glimpses of the life of the actors behind the scenes as they operate the set.

The peak of those narratives is when one of those supposedly hidden actors suddenly appears to save the situation and play the role of Souad. While the actress playing the role of Souad has been hit on her head by mistake, her replacement has no choice but to continue her role so that the show can go on.

The extremely talented actress reads the role of Souad out of the script and indirectly portrays the double dynamics of being the new Souad and of being the old stage helper who has no acting experience.

Sometimes the spectators do actually fall into the trap and forget that even this second layer of theatre about theatre is also part of Crime In Maadi’s design. It is invigorating to see such comic and commercial theatre step into new territories, transforming the spectators’ expectations and providing them with an opportunity to experience theatre in a new and fresh way.

But it is not until everything physically disintegrates on stage that the spectators fully appreciate the extent of adventure and risk that Abdel-Baky has taken to create a pioneering comedy production.

The physical and material objects disappear leaving the stage empty and affirming the value of creativity and of teamwork, something that Egyptian theatre has been missing for a very long time, especially when it comes to comedy.

Crime In Maadi is a new model of comic theatre production and creation in Egypt, a model that inaugurates a new era for Emadeddin Street, of entertainment, bound up with excellence, and of commercial theatre as one facet of artistic entrepreneurship and innovation. Indeed 2019 ought to start with a special celebration of the rebirth of commercial theatre — thanks to Ashraf Abdel-Baky.

This article originally appeared in Al-Ahram Weekly on January 6th, 2019 and has been reposted with permission.