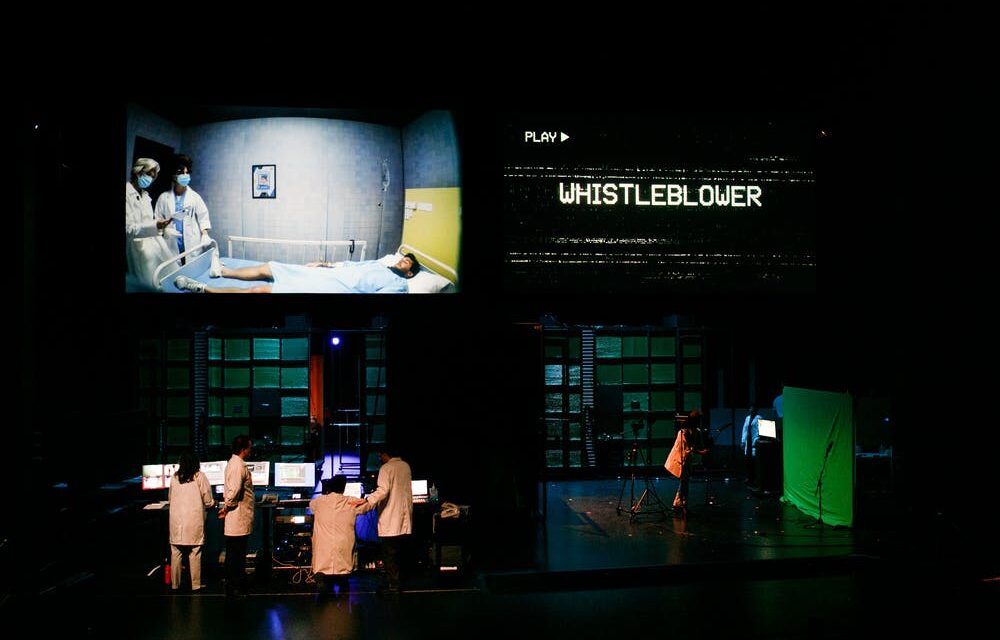 Much about this production is high tech, with all of the work behind the scenes in sight of the audience. Daniel James Grant/Perth Festival.

The Whistleblower is a cross between a choose-your-own-adventure book and an escape-room experience with a dash of the improv TV show Thank God You’re Here. The protagonist is chosen from the audience and the audience are part of the creation.

Given COVID restrictions, it is a feat to have pulled off interactive theatre of this magnitude, but the cast began by assuring us that, while what we were about to watch was theatrically risky, they’d taken every precaution to ensure it was virally safe.

An old-school video game vibe to the design belies the sophisticated technical maneuvers that make the show so slick. With the onstage technicians dressed in white lab coats, a bank of computer monitors, and a visible sound desk, watching the wheels keeping the show in motion is part of its appeal.

For the chosen performer, it is an exercise in trust as they hand themselves over to the ensemble cast of 11. Other audience members become involved, but the weight of the show rests on the shoulders of this one former audience member, who is told only their character’s name before they begin.

Everything else, they find out along the way, as they move through a series of locations trying to work out who they are, why they’re there, and who to trust.

Yet often it is the low-fi elements — relying on the central character’s ability to operate a combination lock briefcase or their presence of mind and memory under pressure — that become the source of the drama.

An Experience Above a Story

The Whistleblower is set in a fictional town resembling a cheesy, 1970s Australian TV show, in a time before the internet brought everything to our fingertips in an instant. The audience member at its heart must choose between acting for the greater good or privileging their personal freedom.

It would be unforgivable for me to blow the whistle on the plot, since future audiences depend on there being no spoilers.

But Whistleblower is not about the plot. It is about the experience of watching real people deal with what is thrown at them, make choices and manage the consequences of those choices. The thrill of the risk is what makes it so engaging.

The awkward moments have a compelling, car-crash quality. We watch the protagonist miss seemingly obvious clues, and careen towards narrative disaster. Equally, moments when the penny drops, when they — with their hand over their mouth in shock — experience genuine “a-ha” moments, were legitimately felt. We truly celebrated their victories.

Witnessing these authentic responses (albeit expertly manufactured by the ensemble) is a big part of the production’s success. Watching the delight of the cast as their chosen performer makes an unexpected choice or achieves a long-sought victory is another part of the work’s appeal.

Given that they’re on stage in front of an audience, the production does a brilliant job of isolating the performer via an ingenious combination of sensory deprivation and overload, deepening their immersion in this fictional world.

The Art of Community

Much of the show is about the audience-member-turned-actor relying on their own wits. This is intensified by their disconnect from the electronic devices we all rely on: setting the story in a time before the internet and mobile phones truly makes the past seem like a foreign country.

The Gen Z performer selected on the night I attended at first seemed overwhelmed by her isolated disconnection.

Quite early, she dropped her persona and tried to call her real-life boyfriend through the old-fashioned, push-button telephone prop: the real world and the fictional world in which she was temporarily residing momentarily collided and she lost her bearings.

Watching her rally and forge a path forward became an integral part of her story.

The takeaways from this production will be different for each performance, but I found the greatest pleasure in being part of the audience: a community instinctively on the protagonist’s side.

We wanted her to do well, even when we were frustrated by her choices. Her vulnerability awoke our compassion. Recognizing we all make mistakes meant it was joyously cathartic every time she had a lightbulb moment and self-corrected: making a choice that would move her forward rather than keep her stuck.

We not only forgave her for stumbling, we celebrated her for persevering.

This article was originally posted on theconversation.com on March 9, 2021, and has been reposted with permission. For the original article, click here. 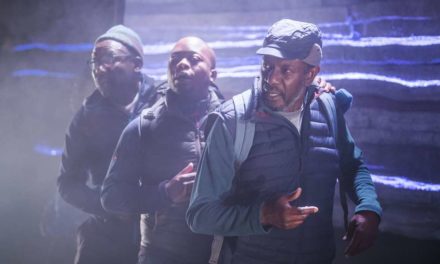