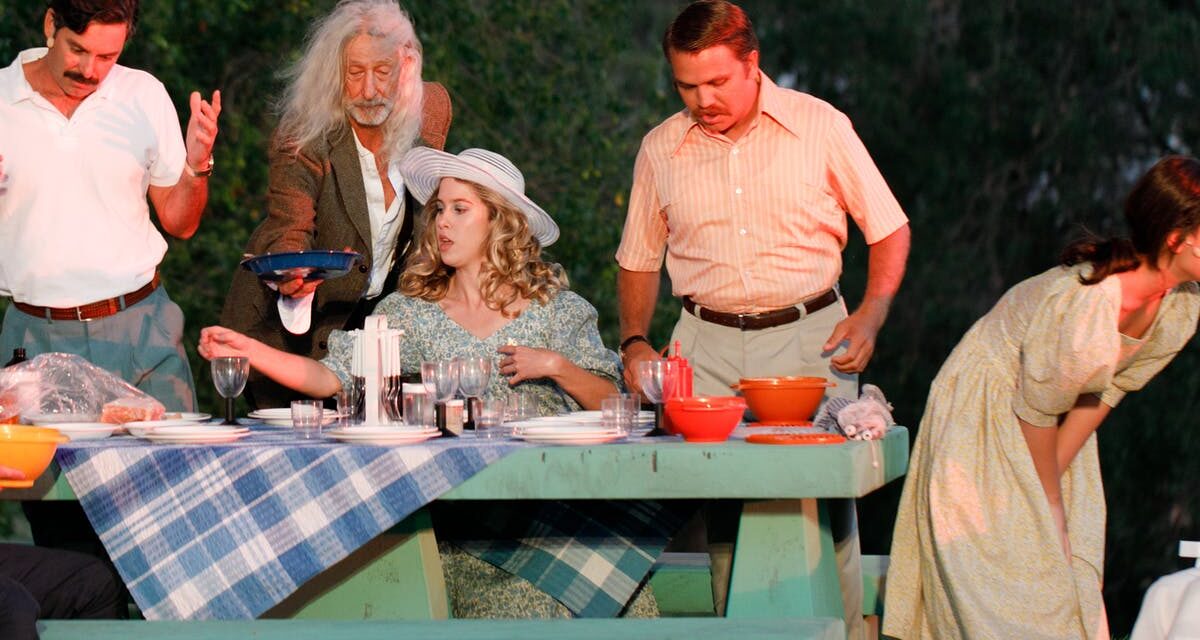 Stories get told over and over, each version sitting atop every other in a never-ending palimpsest. Extracting and extending the metaphors of Anton Chekhov’s classic 1904 play The Cherry Orchard, this production adapted by Adriane Daff and Katherine Tonkin and directed by Clare Watson is as much about its staging at a former hospital as it is about the story and characters.

Reimagined in 1980s Western Australia, the parallels to Chekhov’s treatise on class and land work well: the mining boom, the influx of property developers, Australia (specifically WA) winning the America’s Cup, the Black Tuesday stock market crash, the gross short-sightedness of the Bicentennial celebrating only “200 years of Australian history.”

Set in Manjimup, 300 kilometers south of Perth, known for its annual Cherry Festival and familiar to all West Australians as the name on the cherry boxes they buy for Christmas, act one begins in the old hospital’s hall.

A mishmash of what was there and what set designer Zoë Atkinson has added, the hall represents a dilapidated home on a country estate. The act seems to be performed under the natural light gradually receding as twilight approaches.

With the audience seated around the edges, our views vary between extreme close-up or way-down-the-other-end. This shifting perspective reinforces the sense nobody in this story ever has the full picture. Wireless microphones strike a disconcerting, disembodied note. The audience are spread around the space: sometimes you watch in close up, sometimes you are looking down the other end of the hall. Daniel J Grant/Black Swan State Theatre Company

Characters out of time

For act two, we amble down a grassy slope on the bank of the Swan River to sit on fold-up chairs or picnic blankets. The characters gather around a barbecue, wandering in and out of the scene while the sun slowly disappears.

The adaptation has to work the hardest against this site. The strong evening breeze and pace of the setting sun don’t always sync with the script.

Such disconnect, plus the inclusion of original Russian character names in an otherwise “Aussie-fied” script and the disembodied amplified voices, give the piece a televisual quality, like images from some long-forgotten Australian TV show, swarming with fuzzy memories of big hair, Laura Ashley dresses and Casio keyboards. Peppered throughout are montages of leisurely set-ups and drunken parties to a soundtrack of 80s pop classics. These montages slow the show down, but there is a payoff in this playing with time. Watching these people go about the ordinary business of their lives, it is as if we are hanging out with them.

It also echoes Chekhov’s use of time: his characters act as if they have all the time in the world, until it suddenly catches up with them.

Act three, outside against a festoon-lit verandah, brings us to the tail end of yet another party as the characters, resplendent in fancy-dress costumes, wait for news of the orchard’s sale. The characters think they have all the time in the world — but time catches up with them. Daniel J Grant/Black Swan State Theatre Company

For Lopakhin (Ben Mortley), the “cashed-up bogan” neighbor, it is the culmination of his class-war tightrope walk. Emboldened by his purchase of the property, he cuts sick to Talking Heads’ Burning Down the House. A cross between David Byrne and a drunken used-car salesman, it is a splendidly gauche one-man celebration of his lifelong ambition for status and belonging.

Finally, we return to the hall. Sold, the house has been stripped of furniture and light, and reverberates with the sound of cherry trees being chopped down outside in the long-gone twilight.

Stories out of place

Many of the characters are disconnected from their sense of place.

The matriarch and landowner Ranyevskaya, played with a sexual weariness and fierce fragility by Hayley McElhinney, is a Marilyn-Monroe-little-girl-lost superimposed over Madonna’s Material Girl. In the action to save her home she is pulled taut between inertia and grotesque desperation.

Sam Longley’s long legs, improvisational skills and comedy chops are put to great use as Yepikhodov, the family’s accountant. From his squeaky-shoed entrance to the image of him in fancy dress as a pickle eating a pickle, he is an ugly cry waiting to happen.

These dislocated characters make you think about the rite-of-passage exodus from country towns to the big smoke, or from Perth to the east coast. But the play also addresses bigger pictures of displacement: Varya, Ranyevskaya’s adopted daughter, is played by Asian-Australian actor Grace Chow, and Trofimov, the perpetual uni student is played by Mark Nannup, a Yamatji Nyoongar man.

Trofimov moves between the philosophical (“Real progress is possible, but you have to give something up”) and the realistic (“Maybe you shouldn’t buy another boat”), and most directly addresses the play’s questions about land “ownership.” That much of the adaptation’s gravitas is put into the mouth of the only First Nations character makes absolute sense, but it sometimes seems like a burden he carries alone.

Even so, Daff and Tonkin’s adaptation brilliantly occupies the land created by Chekhov and it serves them well.

WA in the 80s is the perfect time and place to tease out the themes of Chekhov’s play. Pining for St Kilda in lieu of Moscow reeks of the requisite cultural shame.

Wrestling with our cultural inheritance should be a core part of the business of our state theatre company. In sewing together these elements of personal, regional and national identity, this production’s conversation with Chekhov’s classic has done just that.

The Cherry Orchard plays until March 20.

This article was originally published by The Conversation and has been reposted with permission. To read the original article, click here.