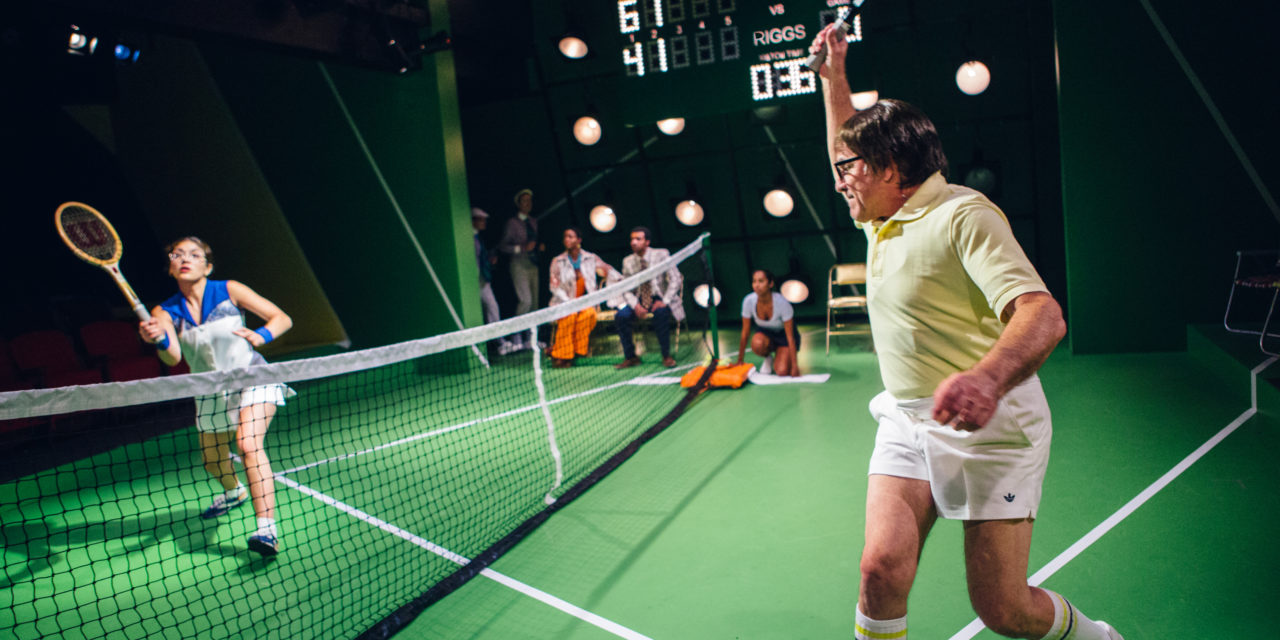 The Astrodome has always stirred up a sense of nostalgia in me. Growing up in New Orleans, we didn’t have a professional baseball team nor did we have a proper amusement park. Houston was the closest major city, five hours west on I-10, so I grew up going to Astros games and AstroWorld religiously every summer. I have the music video of my father and siblings lip syncing Opposites Attract by Paula Abdul (I was the lead singer) and I have the traumatic memories of arriving at the stadium hours before the game so that we could greet Jeff Bagwell and Craig Biggio before they even entered the stadium.

As a tennis fan, I’ve always been intrigued by the Battle of the Sexes, the infamous 1973 tennis match between Billie Jean King and Bobby Riggs that took place at the Astrodome, the 8th Wonder of the World. At the time, the Astrodome was the world’s most famous stadium. The shrine on 610 South is still a cultural landmark that many Houstonians of all generations are not ready to part with. 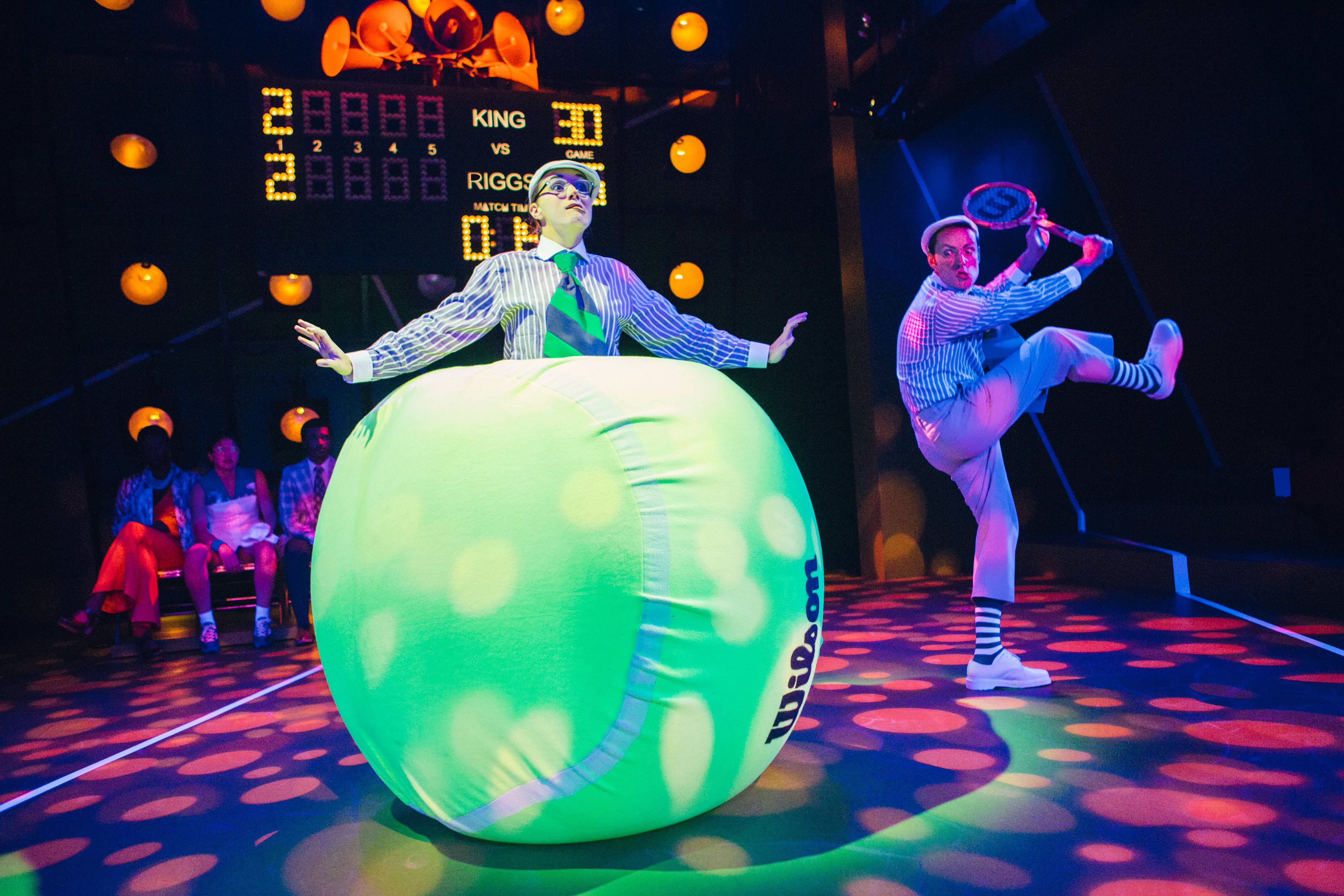 March 1998. Age: 12. While flipping through college football on the TV, I accidentally stumble upon tennis. Venus Williams vs Anna Kournikova in the final of the Lipton in Miami. I’m mesmerized. I fall in love with Venus. Serena, too. I buy a poster of them on eBay and place it on my bedroom wall right next to a poster of Janet Jackson. I never look back.

I’ve always shared my love of tennis with my sister Frances. Growing up we would play tennis together on humid summer nights, dream of going to the U.S. Open, and debate which of Serena’s looks we preferred—Frances opted for the black catsuit while I was a fan of the denim skirt and football socks. In many ways, tennis has always been a special place for us to grow our sibling bonds. Little did I know that in our thirties there would be more room for us to grow.

In mid-August, Frances called me and asked me if I wanted to see the film Battle of the Sexes with her when she came to Houston in October. I countered by asking telling her that we would not only be seeing the film, but we would also be seeing Balls at Stages Repertory Theatre. How fitting then for this sibling doubles team to have a two-show day filled with topspin and volleys? It seems, after decades of playing tennis, going to the U.S. Open, and seeing live theatre together, our two seemingly disparate worlds had finally collided.

Emma Stone and Steve Carell in Battle of the Sexes.

November 2003. Age 18. It’s homecoming weekend of my senior year of high school. I’ve helped plan the dance, but I’m not going. I’ve decided to instead travel to Houston to attend the Tennis Masters Cup at Westside Tennis Club. What once was something only on TV is now live in living color. In one whirlwind weekend, I finally watch the players that have always been on screen; Roger, Andy, Andre, Bob and Mike, and company bring me back to my childhood days watching Breakfast at Wimbledon with my mom or faking sick so I could stay home and watch the U.S. Open on TV during the day.

Frances and I’s tennis double began with Battle of the Sexes. Directed by Jonathan Dayton and Valerie Faris and written by Simon Beaufoy, the film received critical acclaim even if it has not been the box office hit it was intended to be. While I knew much of the history behind the event before seeing the film, I was still hanging on every moment. As a tennis player, feminist, and Billie Jean King fan, I found myself snapping my fingers at her frequent verbal take-downs of the sexist men around her. I laughed, I cried, and I kept thanking the tennis gods that we finally have a biopic about one of the sport’s most interesting and pioneering figures. 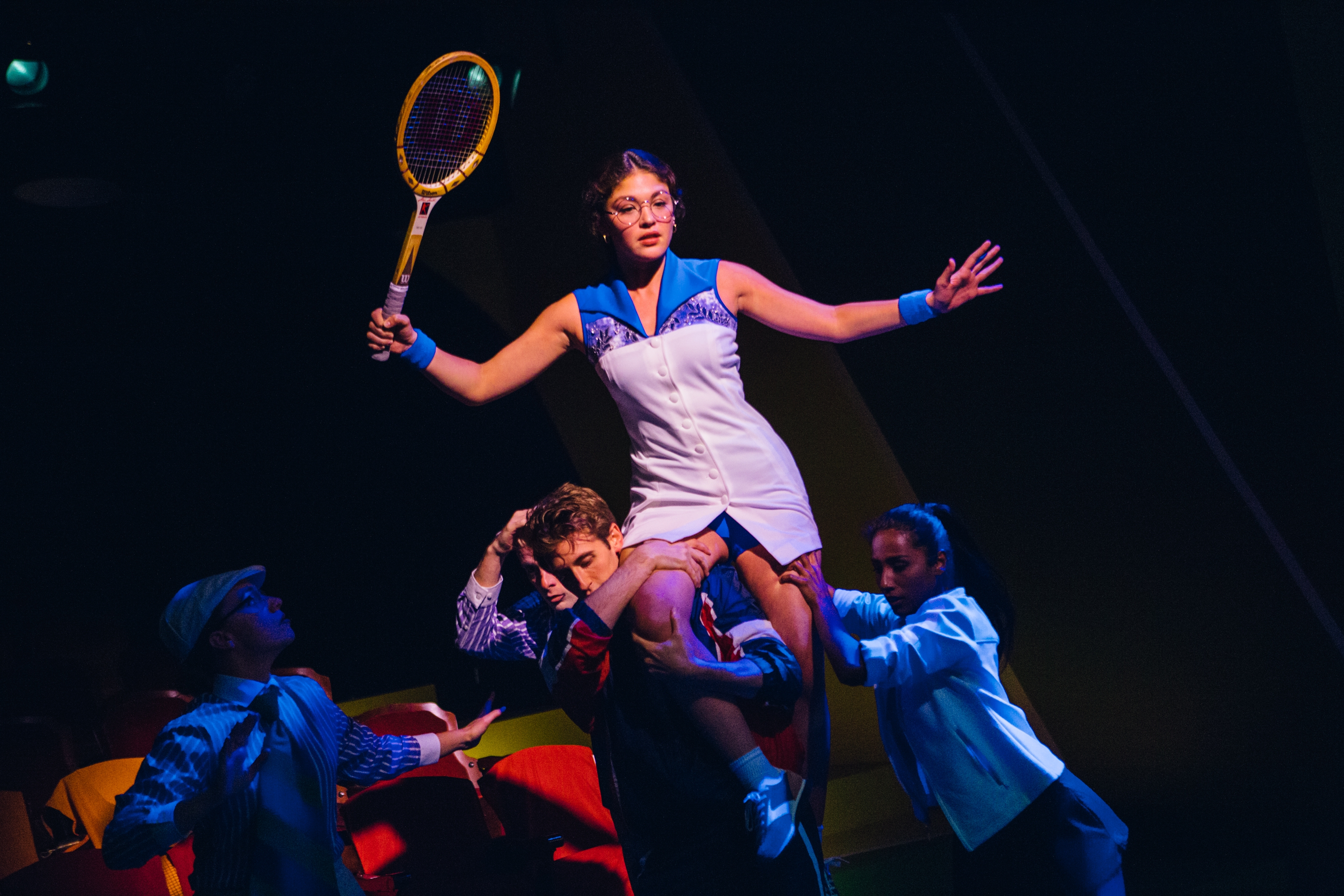 August 2007. Age 21. I’m taking the 7 train to Flushing Meadows. After a decade of planning, my sister and I finally make the trip to the U.S. Open. We are theatre buffs so the weekend isn’t relegated to tennis, after long days spent watching tennis, we take the train back to Manhattan, shower, eat a quick dinner, and see a Broadway show. Memories of Novak Djokovic, Stan Wawrinka, Marion Bartoli, and Jelena Jankovic become jumbled with In the Heights, A Chorus Line, Hair, and Next to Normal. In between forehands and backhands, there are footlights and belting. This is what Heaven must be like.

After the film, we had a quick dinner before heading over to Stages Repertory Theatre to see Balls. Originally commissioned and developed by One Year a Lease Theatre Company, Balls was written by Kevin Argentina and Bryony Lavery. Stages is co-producing the world premiere before the show opens Off-Broadway in January 2018. Founded in 2001, One Year Lease Theater Company is a New York-based ensemble that devises explosive, outside-the-box theatre. According to their website, the company engineers “theatrical events to challenge perception, conviction, stereotype and limiting belief.” And have they ever!

Self-dubbed “part sport, part disco, all carnival,” Balls fully captures the circus atmosphere of the most well-known—and absurd—tennis match of all time. Notably, the plot is not exclusively dedicated to King and Riggs. Balls explores the 1970s’ women’s movement alongside tennis history through various overlapping storylines. Ultimately, stories of a romance between a ball girl and ball boy, King’s affair with her hair dresser-cum-manager Marilyn, and much of human history weave together seamlessly, creating a surprisingly cohesive show. For every King and Riggs, there is a cavewoman and caveman, or a Clinton and Trump. Moreover, Balls is as much about gender as it is about tennis. And, if you didn’t get this already, Balls is completely and utterly carnivalesque. It’s theatre for the ADHD crowd, constantly changing course, but always pointed in the right direction.

Aside from fast-paced direction by Ianthe Demos and Nick Flinte, Natalie Lomonte’s movement direction is a triumph in and of itself. While King and Riggs freely swing their rackets, no one is in danger. In between forehands and backhands, actors perform an intricate ballet, not unlike tennis itself. After all, some of tennis’ greatest players have had graceful footwork, each step a perfectly choreographed dance.

Ellen Tamaki’s turn as King is uncanny at times, from the way she turns after each point to her signature fist pimps (something the film didn’t capture). Even Tamaki’s groundstrokes looked natural, making me wonder if the actor hadn’t been a tennis player in a former life. Donald Corren’s Riggs is big, brash, and every bit the self-dubbed male chauvinist pig that helped make the event such a success. 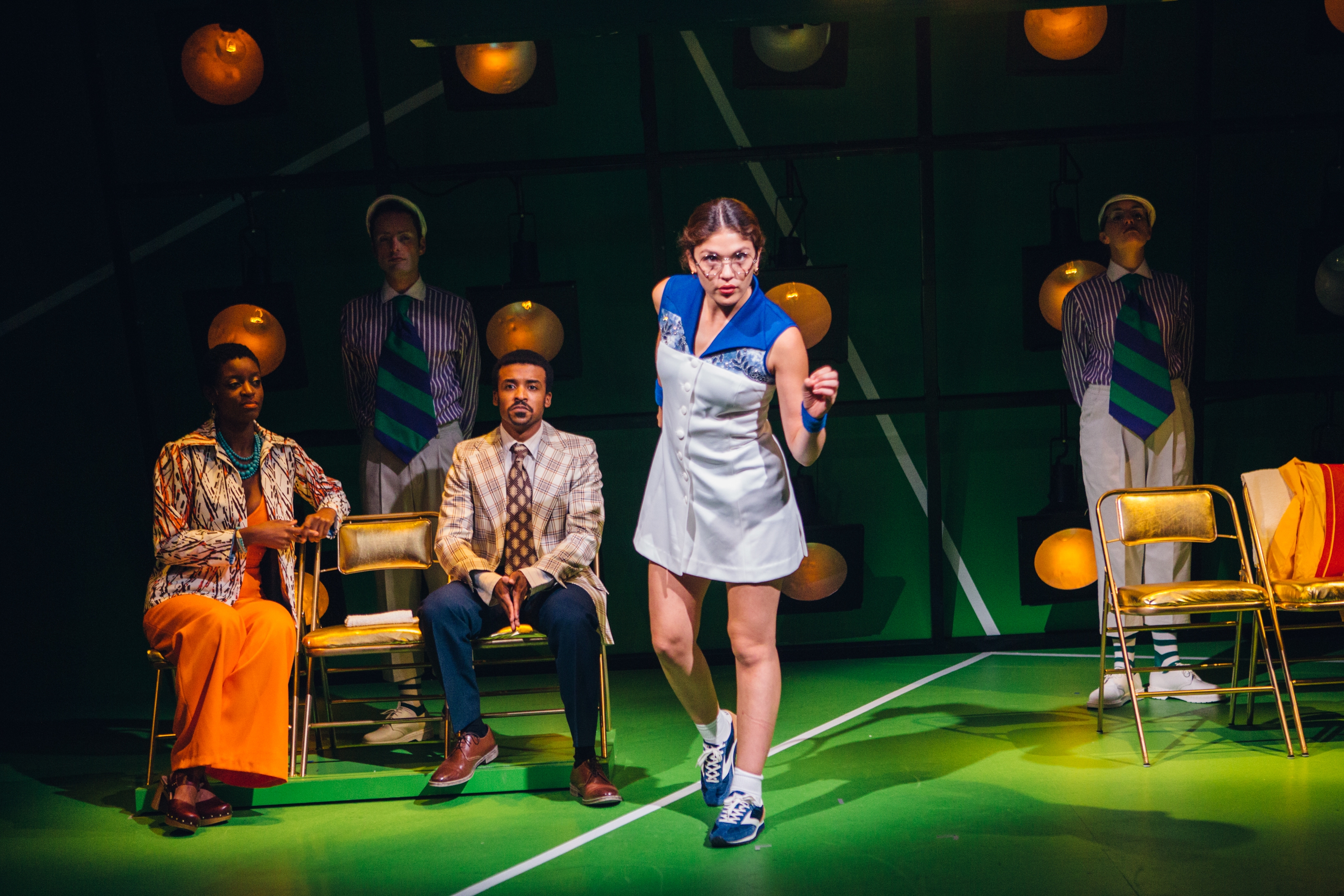 June 2015. Age 29. I’ve always been a Francophile since I was a young child. I dreamed of visiting Paris, learning French, and my favorite grand slam was always Roland Garros. I’m in Paris for a month and the French Open happens to overlap with my stay. I grab a brie sandwich at the local bakery and head to the 16th arrondissement. I enter the grounds and am overcome with emotions. By the time I take my seat in the famed bullring, I am practically crying. A few days later I finally see Serena Williams play live, beating Timea Bacsinszky in the semifinals.

While I drove my sister to the airport following the performance, we couldn’t stop talking about how much fun we had during our Billie Jean King double. And, though we both loved the film, the play was what we kept talking about. That One Year Lease and Stages so perfectly captures the circus that was the Battle of the Sexes is remarkable. Balls gets every minute detail right. As a tennis fan, I was impressed at the accuracy of both story and execution. As a theatre fan, I was blown away by the theatricality of the performance (Clown Boy’s slo-mo black light tennis ball “dance” was a highlight).

I couldn’t help but think to myself, “finally, there’s a tennis play that gets it right!” 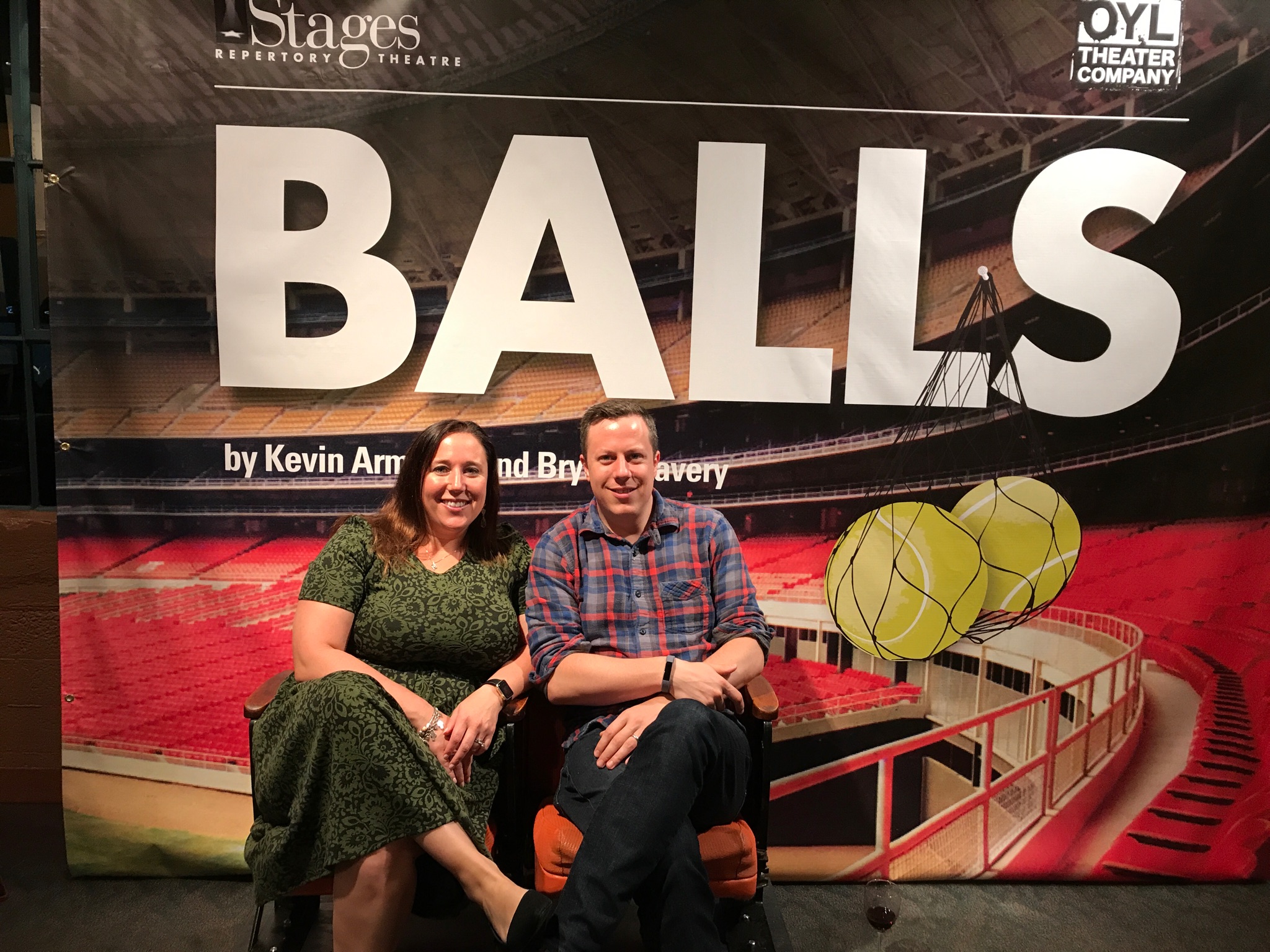