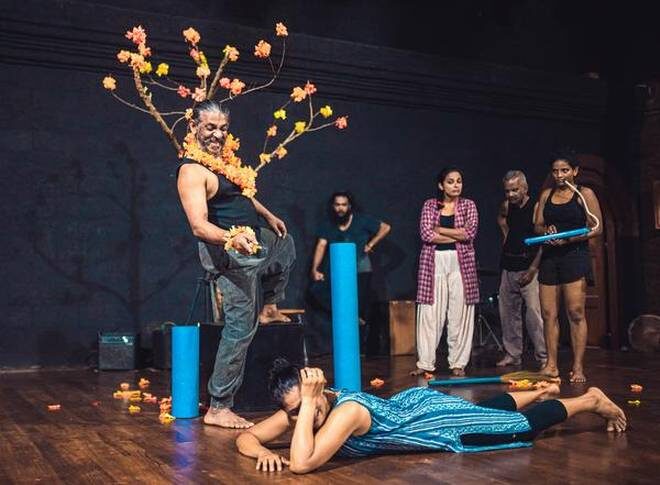 A still from the rehearsals | Photo Credit: Revanth Vojjala

What happens when polar opposites collide? When differing perspectives, particularly around a sensitive human issue, meet face-to-face? Does it necessarily lead to a resolution? These are some of the questions that Puducherry-based Adishakti Theatre Arts trains its lens on, through their new play Bhoomi, adapted from Sarah Joseph’s Malayalam play, Bhoomirakshasam. By placing the onus on a creative space, an actor and her director, the play examines their independent journeys as well as questions around gender, violence, and retribution. As part of their Remembering Veenapani Festival, the musical will première at their premises, this weekend.

An annual affair, which had to be given a miss last year due to the pandemic, the festival is a tribute to the late Veenapani Chawla, the founder of Adishakti and will play out in a staggered manner this year. With plays every month, the festival hopes to get the theatre outfit back on track, after a particularly bleak year. Bhoomi, directed by Vinay Kumar kicks off the festival. The narrative revolves around an actor who has gone through a traumatic experience in a creative space, and her journey towards resolution. There are parallels between the reality and the premise of a mythological play that the group is working on. The uncertainty and voicelessness that is sparked by the play-within-the-play’s narrative powers Bhoomi.

“What stuck with me, even in the original, is how boundaries can be shifted according to the person’s position and power, and how we conveniently pull those boundaries to suit us as well,” explains Vinay adding though he wanted to take a “small” detour from the original, they landed up in more or less the same framework. Having said that, with the writer’s permission, the script was adapted to a certain extent. Over the one year that he has been working on the script, developments in the judicial system and incidents have made him rethink the narrative. 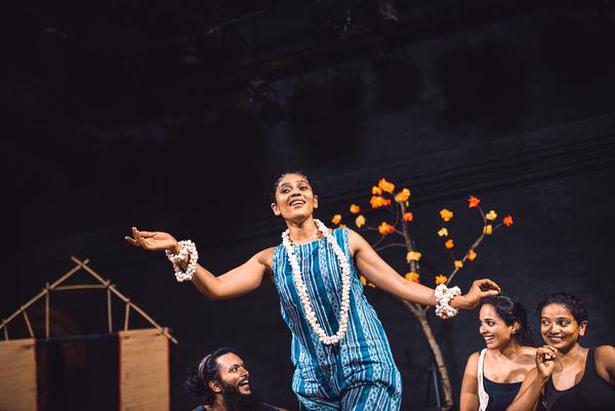 A still from the rehearsals | Photo Credit: Revanth Vojjala

“This is a subject that can easily create a very jingoistic poster girl/boy kind of character to champion the cause. That will be the death of the play,” says Vinay adding that he wanted to ensure the play was not preachy. “You can be an observer and objectively step forward, until the issue becomes close to you. The moment that happens, we do not have the language to respond.”

Unlike other Adishakti plays that rely heavily on movement and physicality, Bhoomi takes on the format of a musical.

A lot of music is played live by the actors. Rather than physicality, the text and the music are prominent in this play,” says Vinay who has also produced the music for Bhoomi.

The play also marks the crew’s re-entry on the stage after the pandemic-induced hiatus. “A lifetime of experiences packed in one year” is how Vinay describes the past year for Adishakti. As revenues dried up, saving the institution was an uphill task. As a second wave-induced lockdown looms over them, the crew hopes that they will be able to continue working.

This article was originally published by The Hindu on April 9, 2021, and has been reposted with permission. To read the original article, click here.