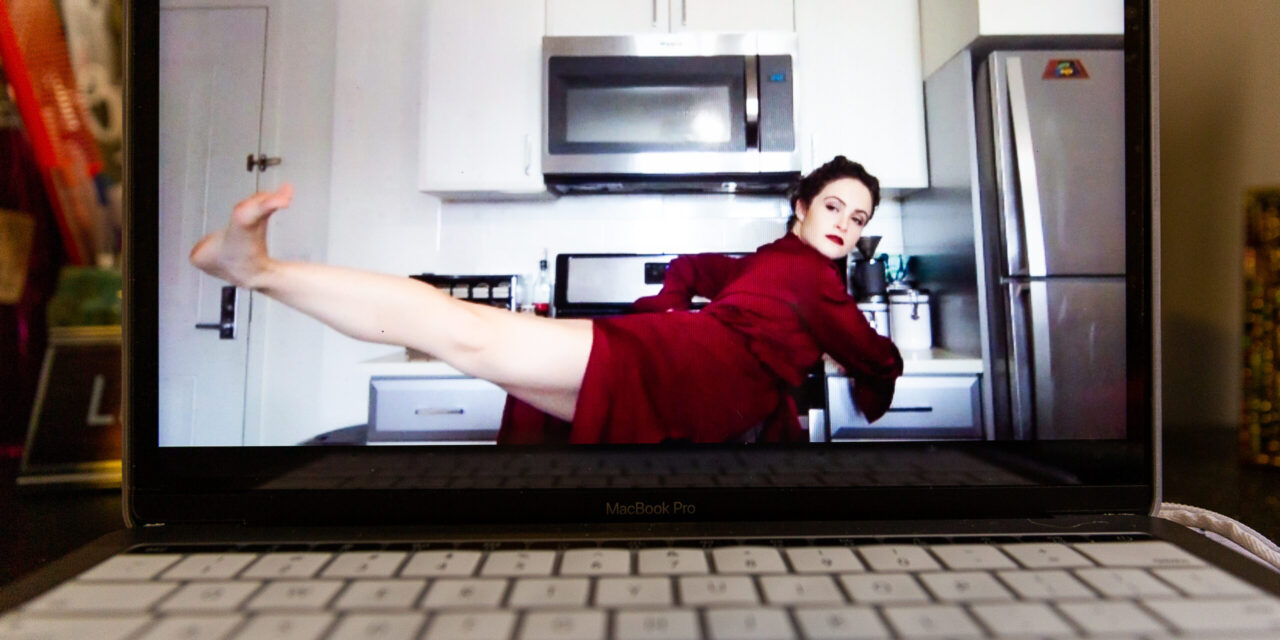 In five years, in ten years, in twenty, we will remember what it felt like to live through the pandemic shutdown? Of course, we will remember the main facts: the sounds of unceasing ambulances blaring, the clapping from balconies at 7 PM for essential workers, the silence of the streets, the many deaths. Will we remember the emotional journey of being alone, or being in small family pods? Multiple and various opinions are already being touted by self-appointed prognosticators who know for certain what we will think and know in the future. On the other hand, we have pieces of art being crafted during these times that succeed far better in extracting the essence of the emotional journey of the past year.

Case in point, in the five movements of Unchartered Territory: Dancers in Isolation, the Eryc Taylor Dance Company has created a finely wrought gem that nearly perfectly captures the roller coaster ride of emotions: loneliness, ennui, grief, desire, despair, that many of us experienced in the last year. Unchartered Territory is a short film of five performances in very quotidian places, apartments, a driveway, a park, a patio, a kitchen. Each of the five movements, Solitude, In Memoriam, Meltdown, Manhunt, Compulsion, features only one dancer interacting with his or her space. All of the performances quite clearly express the ceaseless repetitiveness of pandemic life. Based on the circumstances of shutdowns and social distancing, Artistic Director Eryc Taylor created a method of choreography, called a Movement and Expression Chart, that is used as the basis of the performances. The chart is used to arbitrarily choose moves and even emotions to create a cohesive performance.

All of the Movements are powerful, especially Movement Two: In-Memoriam, where empty chairs tipped awkwardly against a patio table serve as reminders of those who are no longer here on this planet.

Movement One: Solitude evokes the listlessness of shutdown. A solitary female dancer moves about an apartment fully furnished, but devoid of any life other than her own. Dressed in a slip-dress or nightgown, all too familiar garb these days, she languidly moves about the space searching for occupation, crawling on the dining table – playing with the large globular light fixture much like a cat or child. She grabs an open wine bottle and a coffee mug. She rolls on the floor, gazes out the window, drinks from the open wine bottle. She enters the living room and shuts out the viewer when she closes the french doors of the room and dances alone. At this point, camera work and editing become crucial to the performance. With the french doors acting as a way of splitting the screen, the dancer performs movements simultaneously behind both french doors while sometimes disappearing completely or at other times only an arm or leg intriguingly disembodied on one half of the screen.

Movement Five: Compulsion is beautifully shot using a blue filter over a dancer in a white tunic top that is reminiscent of Matisse’s La Piscine. The dancer leaves her home day after day, enters her car, devolves into despair, then exits the car to shower to completely scrub down at an outside shower before reentering her home.

Movement Three: Meltdown and Movement Four: Manhunt capture the universal through the specificity of individual experience.

During Summer 2021, there will be several days of live, outdoor performances of Uncharted Territory and master classes hosted by the dancers, utilizing Eryc Taylor’s Movement and Expression Chart. Two will be open to the general public, and three dedicated to youths, seniors, and differently-abled persons. These workshops will be priced on a sliding scale of $5-25 to ensure accessibility. They are part of the Company’s ETD Outreach Program. This project is made possible in part by a Coronavirus Dance Relief Fund grant from Dance/NYC and the Marta Heflin Foundation’s generous support.