“Typical” at The Soho Theatre 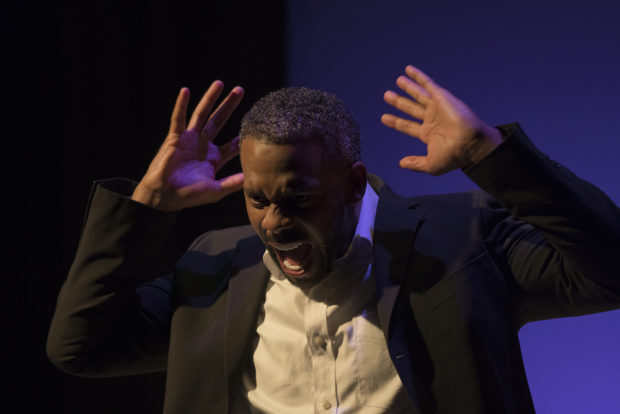 As the events of last year made clear, the police have a problem with race on both sides of the Atlantic. In the UK, BAME people are more than twice as likely to die in police custody while being forcibly restrained than people from other social groups. Written by award-winning actor and writer Ryan Calais Cameron, Typical is a powerful and inspiring example of how theatre tackles institutional racism. First performed in 2019 at the Edinburgh Festival Fringe, the play then transferred to the Soho Theatre for a sell-out run. Now, during the pandemic, this piece has been filmed on location at the Soho, featuring Hollyoaks and EastEnders star Richard Blackwood in a blazing performance.

The brilliantly written monologue is a semi-fictionalized account of the last day of Christopher Ibikunle Alder’s life, which ended in police custody in April 1998. It begins with a man waking up, upset because he’s overslept, well into the afternoon, but happily preparing to go out with his mates. It is, after all, the weekend and the bars and the drink are calling. Siren calls. He’s an ex-soldier, who for the past three years has been separated from his wife, and he’s looking forward to spending some time with his two young boys. He imagines it will be Burger King in front of The Lion King. Before that, it’s time to hook up with his mates.

Things go wrong from the start when everyone he phones is busy. So he sets out alone and ends up in a club. He’s drinking, but quite lonesome. He also feels exposed because he’s the only black guy on a dance floor where everyone else seems to be white: “like a cocoa pop in a bowl of milk.” He is also aware that he’s no longer as young, or as fit, as he used to be. In fact, the boredom of life — he’s not very happy in civilian work — weighs upon his mind. Then he sees a woman he fancies, “a white Janet Jackson”, and he is smitten. Trouble is, his chat-up lines are awkward, and he’s too easily tongue-tied. He feels self-conscious and out of place.

What happens next is violent and disturbing. Not only does the woman see him as a black sex object, rather than as an individual, but a group of clubbers begins to hassle him. The result is a violent assault that ends with him in a hospital; and finally in a police station. The ghastly irony is that although he’s a victim of a racist assault, both medics and police treat him like he’s a problem — typical. When he protests, he is charged with resisting arrest — typical. Then he is forcibly restrained — also typical. Alder’s name appears at the end of this short but intense 60-minute film, and is then joined, in a grim roll call, by the names of dozens of other black people who have been killed by the police.

Cameron’s expressionistic monologue is beautifully dense and detailed. It is not only angry about racism, but also satirical in its depiction of prejudice. Above all, it is deeply humane, both perceptive and insightful. When the man is attacked by thugs he thinks first of his kids. The writing also has a fine poetical charge, with a distinctive rhythm and rhyme. A typical line might be: “Trick my belly into thinking it’s been done./ Get my belly ready for all the drinking that’s waiting to come.” Or a neat image such as “a tiger does not need to proclaim his tigertude”. The use of such imaginatively subjective language risks making pain aesthetically pleasing, but Cameron defuses this by the sheer energy of his writing. This is art, not documentary.

The monologue is a piece of terrific storytelling, which strongly conveys the difference between a black man’s understanding of his life and the way he is treated by others. Charm is insufficient protection against the bad stuff. By allowing us into his inner thoughts we find ourselves responding positively to the reality of his experience, and then being struck by the ugliness of how racists see him. At home, he is an ordinary everyman; but when he steps outside he suddenly becomes a “black man”, a sexualized image, a problem, a suspect. A stereotype of black masculinity. The police, as so often, come across as institutionally racist, and their victim’s last words — “I can’t breathe” — deliver their expected resonance.

Blackwood conveys his character’s world in all its complexity, depth and physicality with a bravura performance. From his clumsy attempts at breakfast to his awkward behavior with women, from his outrage at being misunderstood by doctors and nurses to his suffering at the hands of the cops, his acting has immense clarity and force. Jermaine Edwards’s film of director Anastasia Osei-Kuffour’s production, simply designed by Zahra Mansouri and featuring some great dance music, brings out the humanity of the story and the essential dignity of the protagonist. It ends with a Beckettian close-up that cries out for retribution. Typical is disturbing, moving and eloquent in its brilliant advocacy — justice for Christopher Alder!

This article was originally posted at sierz.co.uk on February 23, 2021 and has been reposted with permission. To read the original article, click here