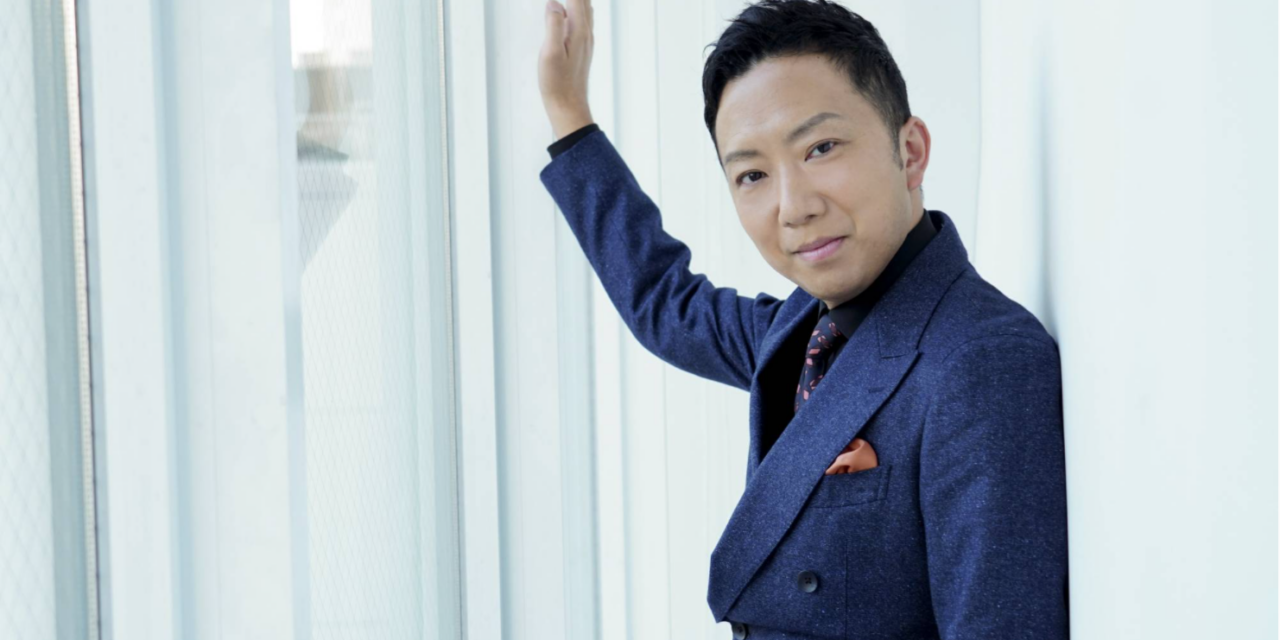 Playing the bad guy: Kabuki actor Ichikawa Ennosuke IV plays Suginoichi, a blind musician who kills and cheats to get ahead but ultimately meets a gruesome end, in the play “Yabuhara Kengyo.” | © KATSUMI MINAMOTO

Colorful graffiti marks the facade of a shuttered shopping mall. People navigate their way around chain partitions and orange traffic cones. It’s a scene that looks familiar to anyone who has walked through the streets of Shibuya recently.

And yet, while the backdrop is modern, the characters in Yabuhara Kengyo (Yabuhara, the Blind Master Minstrel) are rooted in the Edo Period (1603-1868), wearing kimono and living according to the law of the shogun. The play’s protagonist, a blind musician named Suginoichi who has risen from being a penniless minstrel to becoming the highest-ranked performer in the shogun’s court, is played by Ichikawa Ennosuke IV, a member of the venerable Ichikawa kabuki family whose real name is Takahiko Kinoshi.

Ennosuke may be recognizable to some for his recent role as an elite banker and rival to the titular hero of TV’s hit drama series Hanzawa Naoki. But for many others, the 45-year-old actor is a standard-bearer for the Japanese stage who has been pumping life into traditional and modern theater since well before the COVID-19 pandemic disrupted the entertainment industry.

On the day we met for the interview, Ennosuke had already performed in a classical matinee program at the Kabukiza Theatre before moving to a studio to rehearse his role as Suginoichi, the cunning antihero of “Yabuhara Kengyo,” which opened on Feb. 10 and will run through Mar. 7 at the Parco Theater in Shibuya.

In the play, Suginoichi’s ascent from penniless minstrel to master performer is all the more remarkable because not only is he arrogant and averse to studying or practicing music, he is also a thief, rapist, and murderer who slayed his first teacher, among others, to get ahead.

Although another blind performer, Hokiichi (played by Ken Miyake, who tackles five additional roles in this production), advises Suginoichi to keep a low profile because his blindness puts him at risk of being victimized, he pays no heed to the warning and continues to live according to his whims.

Meanwhile, discontent grows in society, and the shogun’s adviser asks Hokiichi how to quell the unrest. The minstrel suggests publicly punishing someone slothful as a scapegoat, adding that someone like Suginoichi could be accused of murder and bear a cruel sentence. Following Hokiichi’s counsel, the adviser puts Suginoichi to death in a manner that is painful and gruesome.

This picaresque play, written by notable postwar playwright Hisashi Inoue, premiered in 1973 under the direction of Koichi Kimura. A success from the outset, the show was repeatedly rerun in Japan, and went on tour to Hong Kong, New York, London, Paris, and Edinburgh. The production was then followed by lavish and energetic costume-drama versions staged by Yukio Ninagawa in 2007 and Tamiya Kuriyama in 2012 and 2014.

To direct the most recent iteration, which is part of a special series marking the theater’s reopening after a major refurbishment, Parco appointed Kunio Sugihara. Widely admired for his bold direction in works such as the rap-style Greek tragedy Oedipus REXXX and his 10-hour trilogy The Greeks, the 38-year-old dramatist has also worked on various “Super Kabuki” shows, a style of theater that combines traditional kabuki style with contemporary themes and media such as manga.

Ennosuke has been a driving force behind “Super Kabuki” for years, and in 2015, he chose Sugihara to be his assistant director on One Piece, an entertainment-focused production based on the titular manga series by Eiichiro Oda. Since then, the pair have often collaborated together, but this time it’s Sugihara in the driver’s seat.

While Sugihira chose the contemporary backdrop of Shibuya so that the story would resonate more with modern audiences, Ennosuke believes that the central theme of the story is already relevant today.

“(The play’s central theme) is about how someone can become a victim of society,” Ennosuke says. “We see such things everywhere in the world, and individuals can easily be accused of violating unwritten codes of behavior. Suginoichi suddenly suffers exemplary punishment ordered by those in authority, but it’s very vague what the truth really was.”

In that vein, the actor warns that it’s dangerous to only see things from one point of view and stick to your own ideas. There are many kinds of people in the world, he says, and each may have different views on what is right and wrong.

“Suginoichi was executed (because he was accused of murder), but there have been times where people received honors and recognition for killing people, such as during a war. There are also cases in which the killer is certain they acted in accordance with their religion. So it’s not possible to declare that my own or someone else’s judgment is definitely correct.”

Faced with “such absurdity in the world,” Ennosuke says, “though people described Suginoichi as an undeniable villain, I think there are still many people like him in our society. Humans probably haven’t evolved much since 300 years ago.”

Following that thought, the actor’s focus turns to the current state of the society as it grapples with an unprecedented pandemic. Despite “the hazy belief that kabuki will continue forever” that some of his colleagues seem to hold, Ennosuke has a more gloomy outlook.

“The Shochiku company controls the kabuki business, so if Shochiku goes bankrupt then kabuki won’t survive,” he says. “Unfortunately, many don’t care whether theater or kabuki will outlast the pandemic or not. And I suppose plenty of people will be angry if the government puts a huge amount of money into them.”

Therefore, rather than passively waiting for COVID-19 to pass, Ennosuke and fellow kabuki actor Matsumoto Koshiro X have forged new ways ahead to keep the theater industry alive. One path includes further developing Zoom Kabuki, a platform they launched in June 2020 to stream performances online.

“I think people need to realize another pandemic may happen again in the near future and be prepared,” Ennosuke says. “That’s why we set up Zoom Kabuki — to create more work opportunities during a pandemic for stage set artists, theater staff, and, of course, actors.

“The reason I started that, and for working on ‘Super Kabuki,’ and also why I’ve sometimes teamed up with rising contemporary dramatists like Sugihara, is that I believe it’s important to encourage young talented people. First we create as many opportunities as we can for promising artists, and audiences will decide their future after that.”

No matter what the future brings, one thing is certain: Ennosuke may think he’s fighting an uphill battle, but he isn’t giving up anytime soon.

This article was originally posted in The Japan Times and has been reposted with permission. To read the original article, click here.