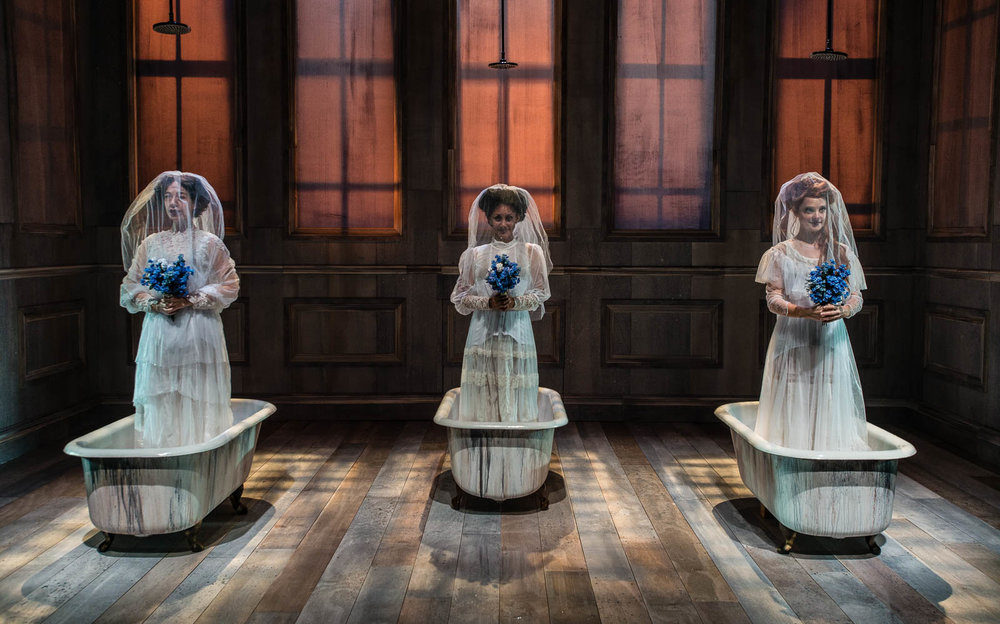 There’s not much on the stage. Three bathtubs, a metal dress form and shower head hanging above each, a backdrop of panelled walls: That’s about it. Designed by Brian Smith, it’s an apt setting for The Drowning Girls, a ghost story about three British women who, all murdered by the same man in the early years of the last century, were considered–and considered themselves–insubstantial. Insubstantial, that is, until their murderer charmed them into marriage, thereby making them, as one of the trios says, “a useful member of society.”

Grim and disquietingly funny, The Drowning Girls (Great Canadian Theatre Company) is as much a cypher for women’s plight in our own day as it is a look back to an era when many women were dependent on men for everything from money to social standing. It was a situation ripe for abuse–physical, emotional, economic, social. That such varied forms of violence against women still exist is the play’s unspoken message.

Playwrights Beth Graham, Charlie Tomlinson, and Daniela Vlaskalic have rooted their script in the real-life story of Bessie Mundy, Alice Burnham, and Margaret Lofty. All three were murdered between 1912 and 1914 by the same man, George Joseph Smith. In each case, Smith swept the women off their feet, marrying them shortly after meeting them, convincing them to turn all their worldly possessions over to him and then murdering them in bathtubs.

The Bessie, Alice, and Margaret we and Smith meet are, respectively, fearful and lonely, young and rebellious, and cautiously proper with a well-buried girlishness. As the three re-enact their stories, sometimes playing other characters in their lives, we also experience the intense vulnerability of each woman. Bessie (Sarah Finn) speaks to that vulnerability when, foreseeing a future as an old maid, she imagines herself “walking alone in a shabby dress … one of those women.” Easy pickings, in other words, for a man like Smith. Seemingly born with the chilling, manipulative skills of a clever sociopath, he makes a brief appearance, depicted by Katie Ryerson, who plays Alice. 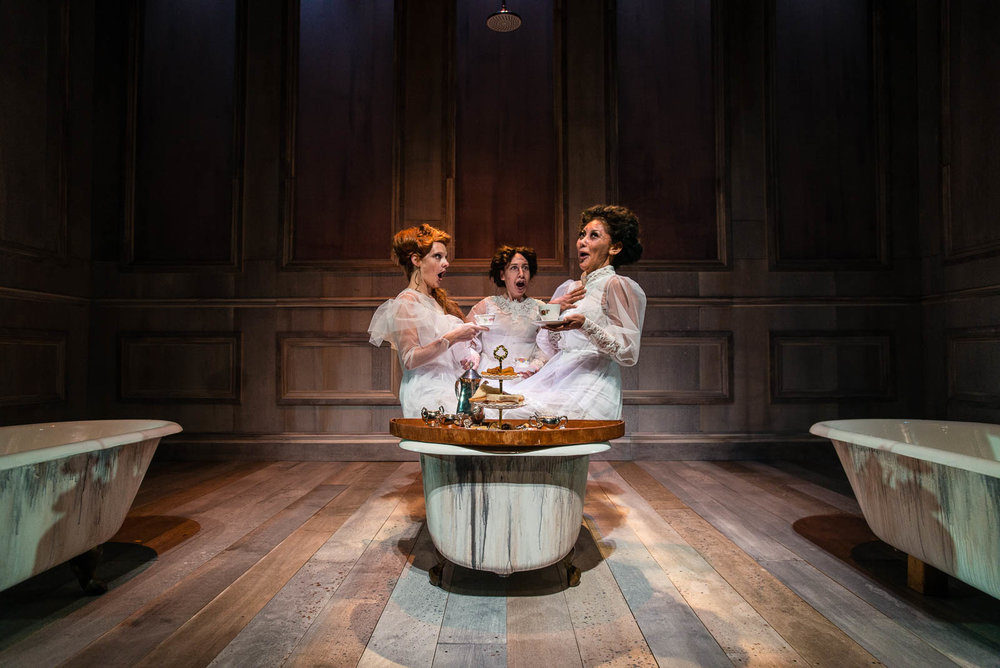 We see too little of Smith to know how well he knew all the susceptibilities of his victims. But as the play evolves, their vulnerabilities come into view ever more clearly. Alice, for instance, blames herself for her own misfortune. “How could I not have known?” she asks, giving voice to the self-recrimination that many female victims of violence say haunts them in our own day. And as Margaret (Jacqui du Toit) says about falling under the spell of her killer, “I’m out of my depth.”

Indeed, as the characters deepen–and as Smith’s seemingly simple set takes on ever greater resonance–we realize how powerless these women are against the onslaught of everything from hope and romance to social expectation and their killer’s single-minded goal. The innocent water of a bathtub (and water permeates this show, from the tubs to the shower heads to the dripping gowns the characters wear) becomes a kind of tsunami from which there’s no refuge.

Directed by Bronwyn Steinberg and given life by a well-balanced cast, the show–which suffers a bit from the script’s underwritten ending—also has a deliberate chilliness and distance. It’s there in the movement, in the occasional choral work, in the almost ritualistic elements of script and production, and in the cool colors and emptiness of Smith’s set.

The chilliness seems to ask us to set aside emotion for a moment and think – as rationally as one can when confronted with horrific deeds–about what’s been done and is still being done to many women. That is not insubstantial.

This article was originally published in Capital Critics’ Circle on October 28, 2018, and has been reposted with permission.