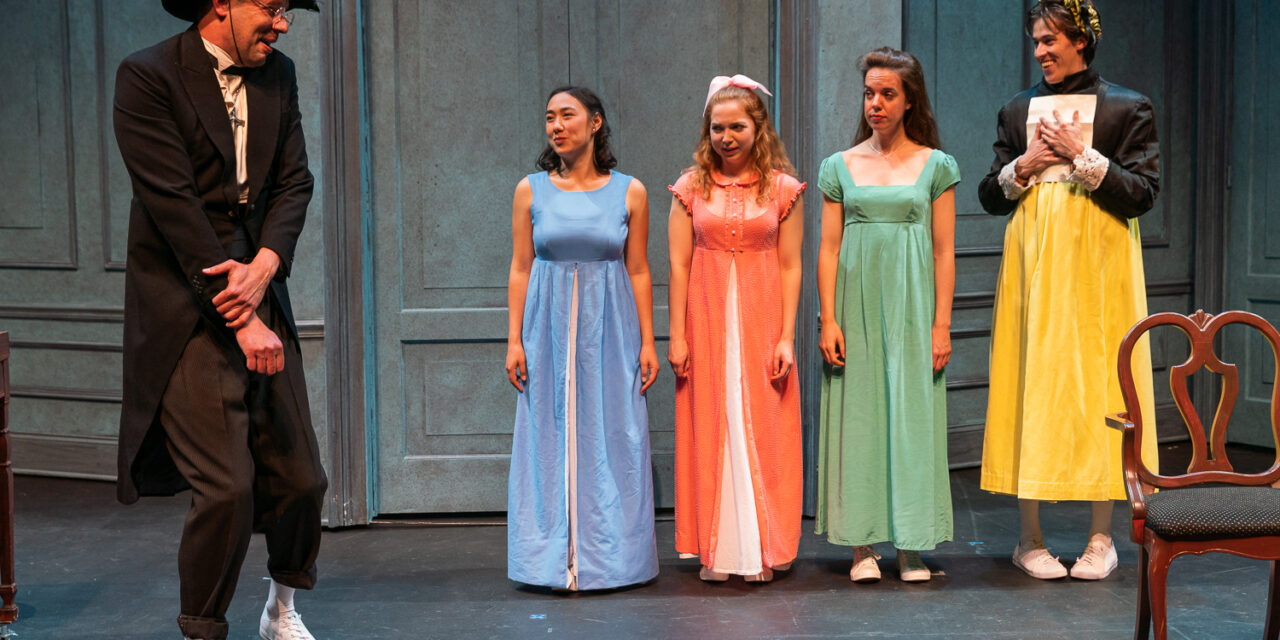 Pride and Prejudice, presented by the Actors’ Shakespeare Project and performed at the Balch Arena Theater in Medford, MA, is a modern and delightful adaptation of the classic novel. In this fresh new play by Kate Hamill, Jane Austen’s romantic story is deconstructed, streamlined, and theatricalized. It’s made distinctly for a 21st-century audience while maintaining its Regency English setting. Director Christopher V. Edwards and his cast of eight talented actors take many risks. Many choices are successful, some choices are not, but all are strong and committed, leading to a fascinating and entertaining night of theatre.

The production plays like an Oscar Wilde comedy, with double entendres, tight slapstick, and a healthy amount of verbal sparring. All eight of the actors’ (four men and four women) comedic skills shine and Edwards deftly directs the show to highlight a variety of comic moments. These range from wonderful tête-à-tête’s with the loud noodle-like Mrs. Bennet and the nose-always-in-a newspaper Mr. Bennet—played by Mara Sidmore and Gabriel Kuttner respectively— to physical humor deriving from Mary Bennett’s trollishness—effectively executed by Louis Reyes McWilliams’ awkward Frankensteinian take on the character. This is a funny show, with many surprising laugh out loud moments which include the deadpan but unintentionally sexual responses from Omar Robinson’s Mr. Darcy (upon being asked to dance by Lydia Barnett-Mulligan’s Lizzy after she spills a drink on his trousers, his response: “I wouldn’t want to get you wet”). 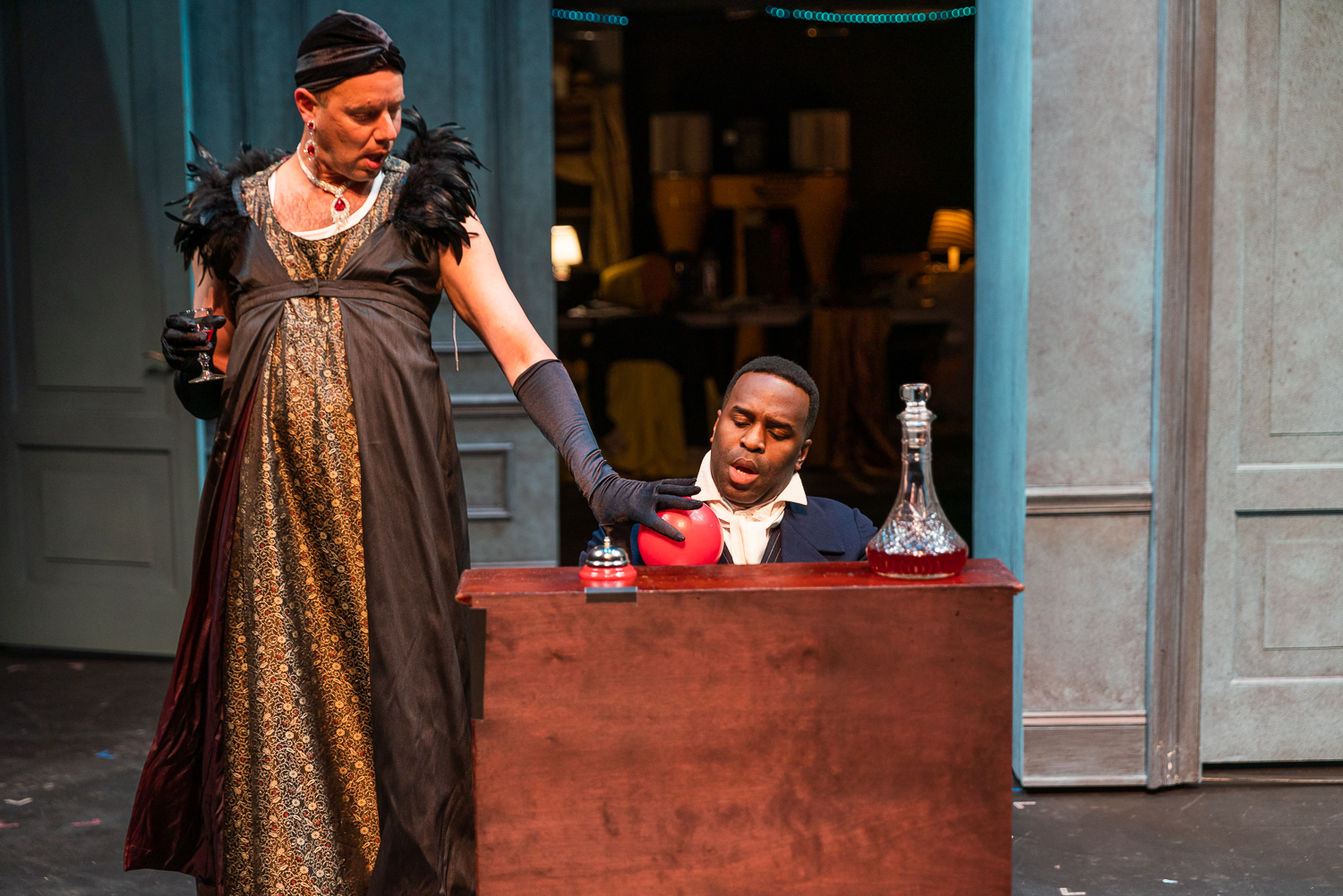 The show also packs an emotional punch. While Mara Sidmore’s humor centers on Mrs. Bennet’s obsessive excitement over the yearly incomes of her daughters’ potential suitors, that lightness turns dark in the second act when her plans for her family’s future turn to ash. Anna Bortnick’s Lydia’s understanding that her second act elopement means ostracization from her family is heartbreaking, all the more so when compared to her childish fascination with marriage in the first act.

Other than the actors who portray Lizzy, Mr. Darcy, and Mrs. Bennet, the rest of the cast plays multiple roles. Anna Bortnick’s Lydia/Lady Catherine double casting was wonderfully distinct and her shifting from a young teenager into her best Maggie Smith for her second act Lady Catherine was a marvelous acting moment. Louis Reyes McWilliams leaping from the unfortunate Mary to the puppy-like Mr. Bingley were also played to humorous effect.

The three-quarters in the round staging engender the focus on the acting and theatricality of this piece – you can see the actors changing costumes and preparing backstage – and three moveable flats with doors make up the entirety of the set. Costumes – including some absurdly large bonnets – are minimal and serve to pinpoint which characters the actors are playing. The props are also kept to the essential, including a red ball Mr. Darcy uses to play fetch with Mr. Bingley. 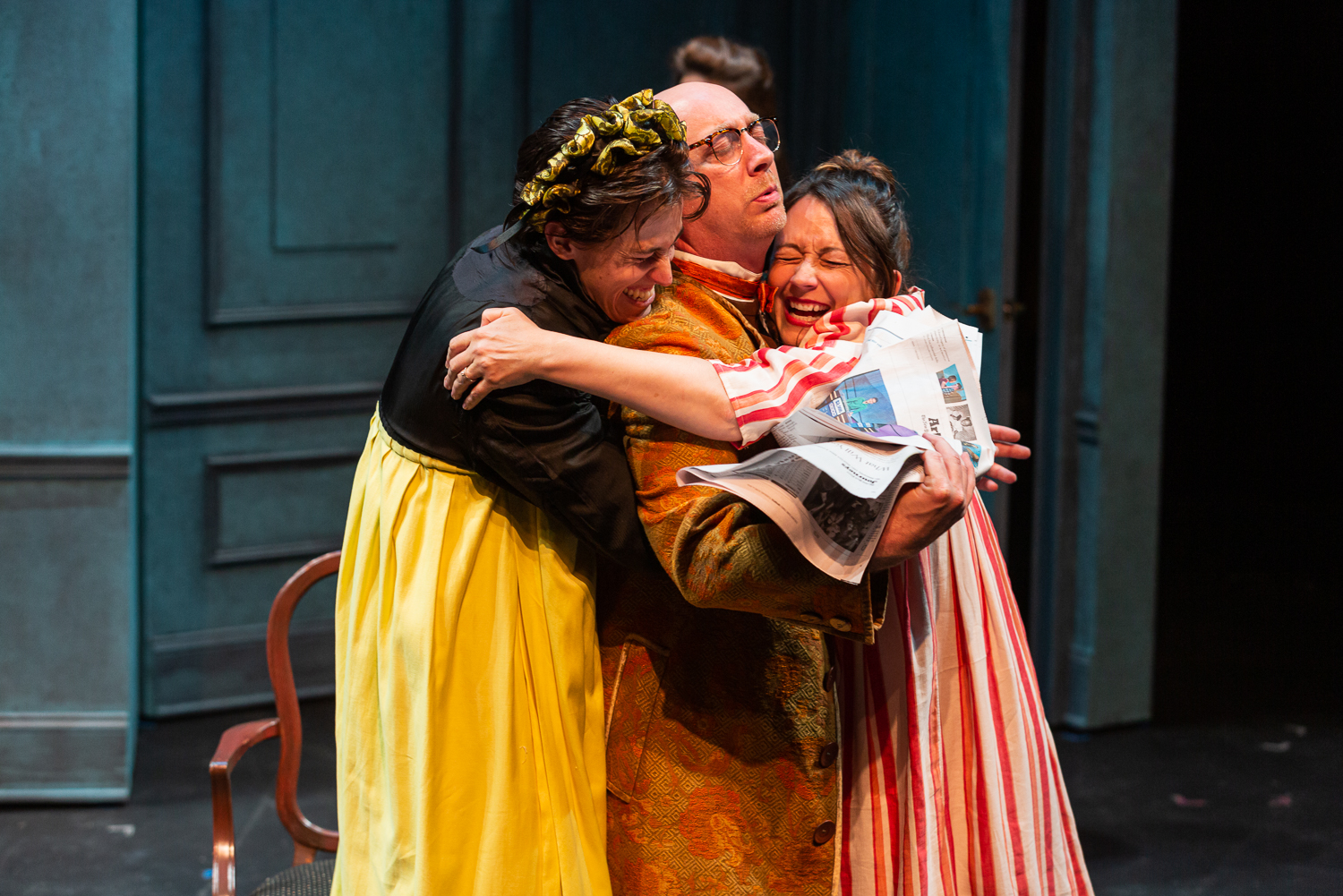 The first act of Pride and Prejudice is a whirlwind of delight, but the second act cannot quite keep up the pace. This is partially due to the play suddenly rushing to wrap up loose ends; it’s also due to a lack of new ideas. Doug Lockwood plays a slimy and loathsome Mr. Collins who is wonderfully spidery is his pedantic rants, but his character becomes tiresome in repeated appearances. Louis Reyes McWilliams’ costume changes become more rampant as the play progresses. In the final scene, he suddenly plays both Mary and Mr. Bingley without leaving the set, but what may have been a comedic climax doesn’t quite land.

Dance plays a key role in this play. The show opens with the cast performing a blend of a waltz and a 90s slow dance in white slips and undershirts. Throughout the play, this old/new blend continues to serve as a means for the characters to physically—and sexually—interact. As director Christopher Edwards writes in the program notes, during 19th century Regency England, dance “was the only place that touch of the unmarried with the opposite sex was considered appropriate.” However, as it stands, these modern moments are distinctly out of place with the rest of the show.

That being said, these critiques are small and serve to emphasize that the Actors’ Shakespeare Project is, in fact, trying many new things in order to bring this show to life. Ultimately, it is this commitment and intent to enliven the play that makes Pride and Prejudice such a success. Several times during the show, it was unclear to me whether particular moments came from the director, the playwright, the actors, or Jane Austen herself: these moments just felt so true and honest. Actors’ Shakespeare Project’s Pride and Prejudice is a thoughtful, funny, risky, joyful piece. 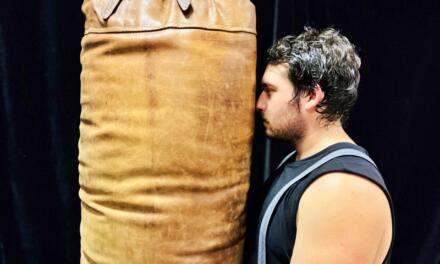