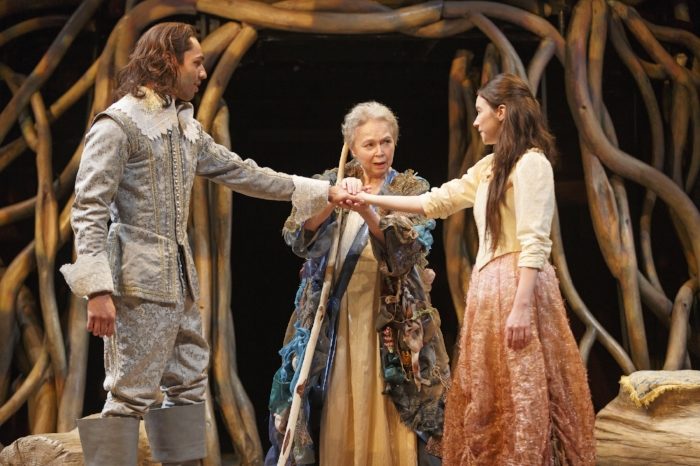 Purported to be the last play the Bard had written alone, Stratford’s version of The Tempest captures a sweeping tale of revenge, compassion, empathy, and forgiveness now on stage at the Festival Theatre. I can recall reading the rather challenging text during my undergraduate years and remembering there was so much going on at so many levels. It would take a discerning vision somehow to connect all that is going on to a diverse twenty-first-century audience taste.

I’ve always found the story to be epically larger than life. For twelve years, Prospero (Martha Henry), the former Duchess of Milan who is well versed in the magical arts, has been marooned on an island with her daughter, Miranda (Mamie Zwettler). They landed on this island after the King of Naples, Alonso (David Collins), and Prospero’s brother, Antonio (Graham Abbey) deposed his sister from the throne and cast her away with her daughter who was about three at the time. Prospero established dominion over this island and its inhabitants including Caliban (Michael Blake), a monster and Ariel (Andre Morin), a spirit. Prospero has received a sign in the heavens that Antonio and Alonso are within her reach so she may exact her vengeance for what they have done to her.  She uses her magical powers to raise a storm which brings everyone to this island, including Alonso’s son, Ferdinand (Sebastien Heins).

Director Antoni Cimolino has created a grand vista of a magical world on the island to which Prospero and her daughter have been exiled. The split-level Festival stage has been raised and, at the top, there is a mighty tree with naked, overhanging branches. The strong, sturdy roots of the tree reach down to the stage below. To the right of the tree is a stump. As the performance began, I marveled at the stage magic in the seamless transformation from the world of Prospero’s island to a vessel battering the elements upon a stormy sea. Sound effects of the waves hitting the vessel were nicely timed with the performers’ movements.

Additionally, there are some wonderful visually staged moments which complement the fantasy-like action of the play. I was quite impressed with the group efforts of the Spirits and the Monsters in their complete stillness and quiet focus. In the second act, there is the appearance of what appears to be a bird-like dragon which had me captivated and spellbound. For a few minutes, I couldn’t avert my eyes from the puppet-like movements and marveled at its execution.

Ultimately, I must buy into this world of The Tempest, care about it, and the people here for the nearly three hour running time. Visually, I was able to suspend my disbelief as there is so much good stuff to see and to view. For the most part, I did care about the characters and was puzzled why I didn’t really make a connection to someone whom I thought I would.

In her moments of stillness and silence as Prospero, stalwart Stratford veteran Martha Henry was composed and dignified. Five minutes before the top of the show, she entered unobtrusively and took her place reading her book of spells. Like an orchestra conductor who raises the baton before the music begins, Ms. Henry regally raised her stick to control the sounds and sight elements of the weather. Magnificent to watch for a few minutes.

I wanted there to be more push and pull tension in the relationship development between her and Miranda (a lovely performance by Ms. Zwettler). I did have some difficulty in hearing Ms. Henry from where I was sitting. Prospero introduces the important themes of revenge and vengeance. Ms. Henry calmly recounted what had occurred that led to mother and daughter living on the island. I did hear that periodic slight tinge of regret and hurt in Ms. Henry’s voice, but volume issues eluded her periodically and I wasn’t able to hear and make important connections to plot information.

There were intense moments of push and pull tension with Graham Abbey’s Antonio, a man who shows no remorse for his actions even though the spirits try to convince him otherwise.

Andre Morin encapsulates a majestic but sometimes hardened Ariel who has also endured challenges and struggles. Ariel had a hardened and unsteady relationship first with Caliban’s witch mother, Sycorax, and now the former Duchess. In return for his freedom, Ariel must perform Prospero’s magical errands. Michael Blake’s Caliban touched my sympathies convincingly as the man-servant who has been hurt by the toxic relationship he shares with Prospero. When she arrives on the island, Prospero teaches the gift of language to Caliban in exchange for learning what the island has to offer, but this came at a cost to the creature. Now Caliban wants to escape from Prospero’s care, but ventures to a less worthy master in Stephano (a wickedly amusing c).

The growing attraction, relationship, and marriage between Ferdinand and Miranda (Sebastien Heins and Mamie Zwettler) is both sweet and whimsical even though Prospero has already wanted this match as part of a plan to restore her daughter’s inheritance.  Humourous moments do help to alleviate the tension in this story, and the drunken bits between Stephen Ouimette and Tom McCamus as Trinculo and Stephano offer some quick levity for the audience.

Final comments: There is the famous line from the second act which always resonates with me each time I hear it: “We are such stuff as dreams are made of.” To see and to hear professionally trained actors practice their craft using the beautiful language of the Bard as their vehicle is a dream come true each time I attend the Festival.

This article originally appeared in Onstage Blog on August 18, 2018, and has been reposted with permission.