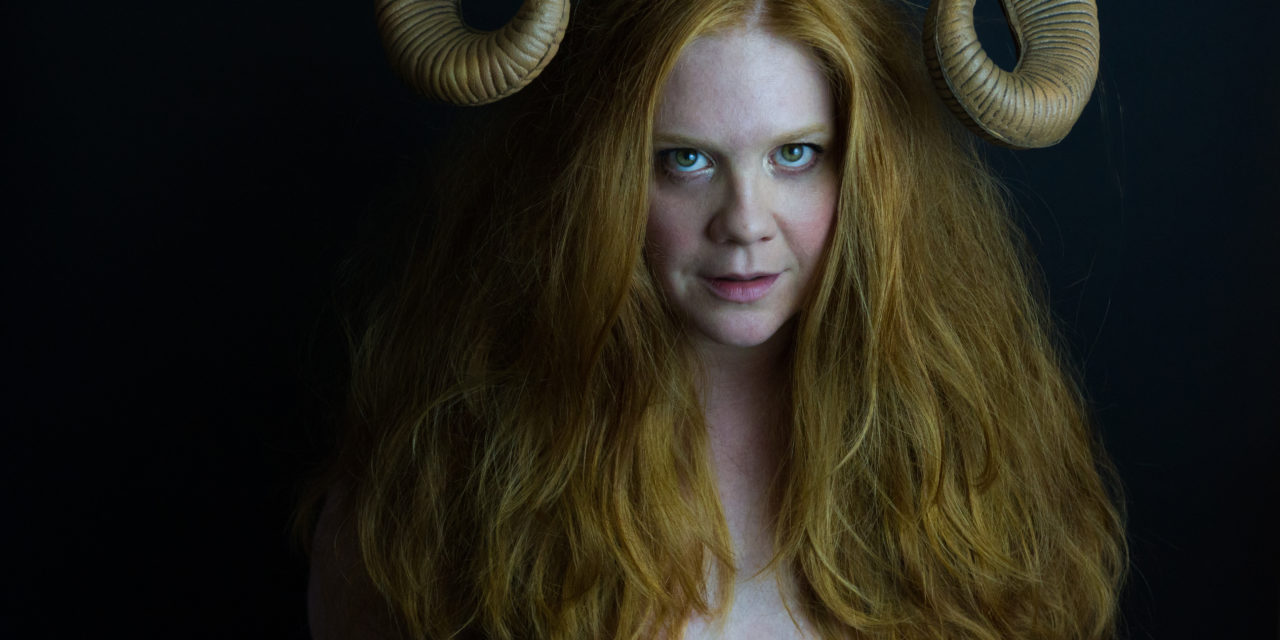 Jody Christopherson’s one-woman show St. Kilda, at the So-Fi Festival, gave me one of the funniest, spookiest experiences I’ve ever had at the theater. The festival, at Torn Page, the performance space/home of actors Rip Torn and Geraldine Page in New York’s Chelsea neighborhood, bills itself as “a low-fi, high concept, multidisciplinary, solo performance festival, challenging the boundaries of storytelling since 2018.”  That puzzling rhetorical move, pointing to the present moment (“since 2018”) as the beginning of a legacy, works well for Christopherson, who is also the festival’s artistic director. Her play follows a young woman, mourning the loss of her grandmother, on a journey from rural Nebraska to even more rural St. Kilda, a small and basically haunted island off the Outer Hebrides. Her transformation from a bold contemporary American woman to a figure steeped in Scottish myth suggests that the dividing lines between past and present, between the Old World and ours, are perhaps more illusory than we would like to admit.

With the timing of a seasoned comedian, Christopherson sparkles as a story-teller, breathing exciting new life into this oldest of art-forms. She does not shy away from making eye contact with her audience, especially at discomfiting moments. This is a particular virtue in the venue of the festival: the second-floor living room of a spacious apartment. When the performance got really creepy, the open door leading to the stairwell was the only thing reassuring me that nothing could actually jump out and terrify/murder me.

Genre-wise, Christopherson’s play belongs with other works of feminist comic-horror, like the films Teeth and Jennifer’s Body. Early in the performance, she discusses sexual coercion and gendered negotiation as givens for heterosexual transactions which, after all, they are. When she eventually assumes her rightful place among the witchy women in her ancestral line, it seems a rightful settling of scores, but not a petty quest for vengeance. The real power, the play suggests, is in keeping your power hidden.

Christopherson’s strength as a story-teller aside, the most remarkable aspect of the show was the incorporation of sound art, a medium with limitless unexplored potential. Strewn on tables around the central microphone were an aluminum pie tin filled with sand, two empty plastic bottles, a metal mixing bowl filled with water, &c. Each of these was deployed to represent various actions in the play, like sludging through mud and burying a dead body. These sounds were recorded, looped and layered together with her own haunting extemporaneous singing which created a chilling soundscape, not unlike the opening theme music of Are You Afraid of the Dark?  She also uses voice-recordings of the actor Michael de Roos as Yfke, a Dutch sailor who offers to ferry her from Glasgow to St. Kilda, to create a dialogue without sharing the physical space of the stage, itself a bold move of feminist empowerment. And in moments evoking the dear departed granny, she nails the Scottish accent.

During the hour I spent watching St. Kilda, I learned a little bit about Scottish geography and mythology and leaned deeper into sound art, which I consider a great untapped source for creative experimentation. But the greatest revelation was Christopherson herself, an exciting, inventive performer, able to inspire fear, sympathy, laughter, and wonder. She’s a visionary in the theater world and legendary story-teller. Since 2018.