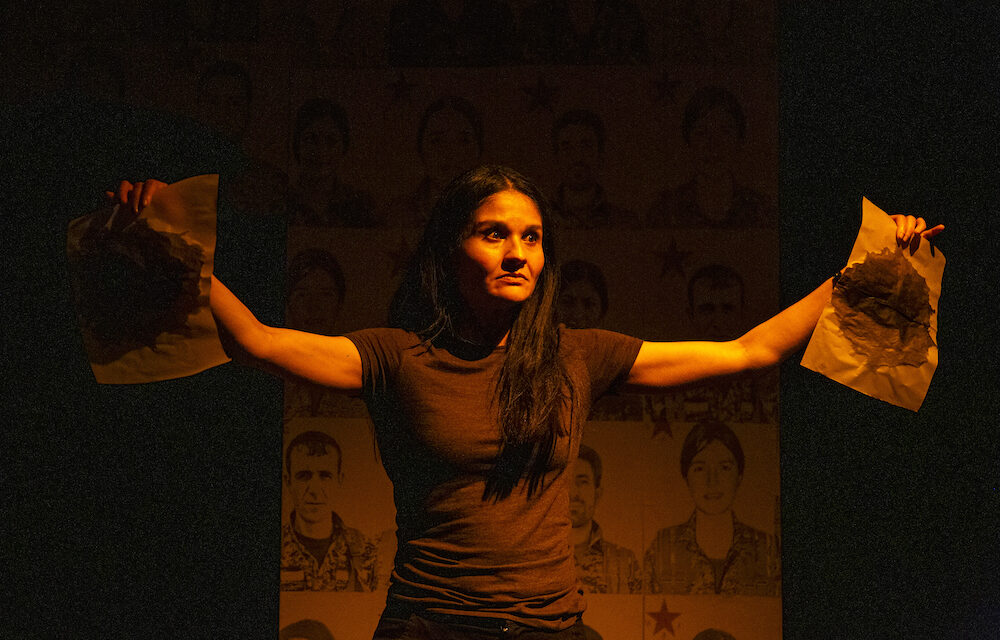 The rewriting of Ancient Greek myth offers a way of creating contemporary stories that have a deep resonance. In Blueprint Medea Julia Pascal takes Euripides’s classic tale of a woman scorned and gives it a new meaning by setting it in the context of the struggle of the Kurdish people for their own homeland, and the perennially hot topic of migration. It is based on interviews with ex-Kurdish fighters who are now living in the UK, including refugees, as well as the story of Asia Ramazan Antar and the Kurdish Women’s Protection Units, who demand female independence as well as a Kurdish state. Using the Medea myth as a blueprint for a contemporary play gives the story emotional and psychological depth.

Pascal’s Medea is a Kurdish freedom fighter who, after a close escape from the Turkish army, journeys to the UK, and arrives on a forged passport. This deception is detected at the border, and she then develops an uneasy relationship with Suzy, a charity worker who helps asylum seekers. When Suzy helps her get illegal work as a cleaner in a gym, she meets her Jason, or J, who likes working out and, in a nice touch, wears a “Young God” T-shirt. He thinks he’s very cool. His real name is Mohammed and he’s a London-born Iraqi taxi driver. After the couple set up home together, and Medea gives birth to two little boys, their relationship is sabotaged by his father, a bigoted Iraqi who hates Kurds, and who forces his son to marry Glauke, a cousin. As a result, Medea plots her inevitable revenge.

In this retelling, Medea is a strong woman whose experiences as a freedom fighter give her a tough and independent, almost Amazonian, spirit which is balanced by moments when a softer sensibility is allowed to emerge. Pascal writes with a brutal directness, pausing in her storytelling to embrace images of female solidarity (whether domestic or military) while also exploring the feelings of living in a female body. Medea, aged 15 and already a soldier, wants to have sex, to become a woman; Glauke, a grown-up virgin, is painfully deflowered. At the same time, the male body is shown in a variety of ways, from muscular beauty to infant vulnerability. In response to the phallocratic nature of our society, Pascal offers a response that mocks male pretentions without abandoning sympathy for all men.

All of Pascal’s characters are caught in the clash of enormous forces that they can barely understand: Medea is initially perplexed by the rules governing migration into the UK; Jason cannot fully comprehend the passion of his father for an arranged marriage, nor the depth of his prejudices. The huge struggle between the Turkish government, the Iraqi government, and Isis, in which the Kurds are also caught, is also shadowed by the history of the Armenian genocide, which is deftly alluded to. The rich multi-ethnic and multi-cultural heritage of Iraq, and that whole part of the Middle East is described both in the play and in its program notes: today’s Kurds are descendants of the Medes whose empire, according to the Greek historian Herodotus, once stretched into modern Turkey. So the Kurdish Medea is as ancient as the Greek Medea.

Using flashbacks to the situation in Kurdistan from 2006 to the present, Pascal sketches out Medea’s past and shows how her character, with her healing hands and aura of witchcraft, is both contemporary and mythical. The play runs for 85 minutes, which makes it punchy and direct, but perhaps is not long enough to fully explore all aspects of Medea’s character. The story is told by five actors, three of whom who play several roles each, linking Medea’s experiences in Kurdistan with her present life in London. On Kati Hind’s functional set, which depicts the faces of Kurdish fighters, Pascal, who also directs, uses Brechtian devices at several moments to surprise and engage the audience, and her cast is powerfully effective: Ruth D’Silva’s strong-minded Medea and Max Rinehart’s tormented Jason work well together, while Tiran Aakel, Shania Hama Ali and Amanda Maud play the rest of the roles. A strong and informative evening.

Blueprint Medea is at the Finborough Theatre until June 8.