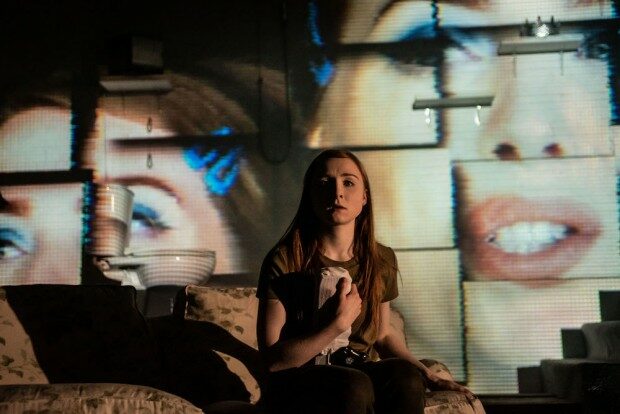 An armadillo is a small mammal, but this is not a play about the amazing relative of the anteater. Instead, American writer Sarah Kosar’s new 85-minute drama plays on the meaning of the word armadillo, which is Spanish for little armored one. And, as we all know, the best way to be armed in today’s American is to have a gun. Right? Wrong! Well, maybe yes and maybe no. Anyhow, John and Sam, a couple who live in Butler, Pennsylvania, certainly think so. They like guns; they like shooting them; hunting with them. They have a family which values guns. And you can easily see why: guns make you feel safe; guns give you power; guns are sexy.

One day, when John and Sam are making love, playing a sex game which involves a gun, a favorite toy, it goes off by accident and Sam is shot in her shoulder. After she comes home from the hospital, the couple decides to give up their guns. Instead of the real thing they fill the house with Nerf guns and water pistols. A few months later, 13-year-old Jessica, a local schoolgirl, goes missing, an event that reminds Sam of what happened to her some 15 years previously: she was abducted and, although she was rescued by chance (with the aid of a gun), the scars of this teenage trauma have not completely healed. When her brother, Scotty, comes to stay with the couple the emotional temperature rises. Not only does he love guns, which are now forbidden in the house, but he also remembers what happened to his sister when she was kidnapped.

On one level, this is a fascinating, complex and intelligent play about trauma, and how to cope with it. Sam and both the men in her life, husband John and brother Scotty, have devised certain rituals and games to help her come to terms with her memories of abduction. So Sam role plays scenes from her kidnap with her brother, and she plays gun games with John. But can these practices really heal the wounds, mental as well as physical, that she has suffered? Or do these various games actually expose the dissatisfactions in Sam and John’s relationship? When, at one point, Sam asks Scotty to get her a gun and help her replay one crucial scene from the past, the drama drives rapidly to its unexpected conclusion.

Kosar writes with a compelling power about obsession and has a quirky and open-minded approach which is refreshingly nonjudgmental: her characters play sex games that are not politically correct; they love their guns with a deep passion. They develop complex choreographed drills to deal with an intruder; they know how to move around with their firearms. In fact, both John and Sam behave like addicts: when they ban guns in the house, they suffer withdrawal symptoms. They stop having sex; they itch to get their weapons back. And this sense of emotional dependence gives the drama an edge-of-your-seat buzz. You never quite know what they will do next; you dread the accidents that might happen again. It’s a brilliantly tense play.

The playwright not only explores the experience of trauma, and the love of guns as symbols of power and safety, she also relates the abduction of Jessica to the current pervasive presence of digital media. Video images capture the 24-hour news cycle, and the media commentary is intensified by Twitter and Facebook. Snapchat is mentioned. As the young teenager’s image appears everywhere, Sam becomes convinced that she will not survive. After all, her abductor must know that everyone is aware of her going missing and so will not be able to risk keeping her alive. In one of the creepier passages, Kosar has her characters imagine how the pedophile would relate to his victim. It is convincingly chilling.

Kosar writes engagingly about unusual relationships: in this case, the male rivalry between John and Scotty comes across as a miniature power game. Both are rivals for influence over, and attention from, the woman at the center of the story. And they compete in advocating their own particular views: Scotty’s chilled and boyish enthusiasm for weapons and drugs contrasts with John’s more grown-up, and tight-assed, desire for the couple to cure itself of its addiction to, and love of, guns. And it really is love. Kosar shows how people caress guns, how they cradle them as if they were pets, how they enjoy the different sounds they make. At one point a bullet is an object of almost erotic sensuousness; at another, it is a spy, a glittering eye, in the bedroom.

Armadillo is thrillingly written, its text brilliantly balancing lightness with profundity, fun with perversity, fear with self-help. Sara Joyce’s superbly stylish production is both emotionally strong and intellectually stimulating. On Jasmine Swan’s set, which includes a swimming pool as well as a living room and a bedroom, and trees and leaves, inside and outside, the cast of three — Michelle Fox (Sam), Mark Quartley (John) and Nima Taleghani (Scotty) — perform with impressive commitment and energy. Despite some rough and ready moments, the pleasurable result is greatly helped by the work of movement director James Berkery and video designer Ash J Woodward, whose fragmented and zappy images are projected on the set’s back wall. There’s a wonderfully odd, dream-like quality to many of the episodes, with Day-Glo lighting and a spacey version of “American Pie” as the soundtrack. Armadillo is not only imaginatively written; it is vigorously performed and amazingly staged.

This article was originally published at http://www.sierz.co.uk on the 5th of June, 2019. Read the original article.