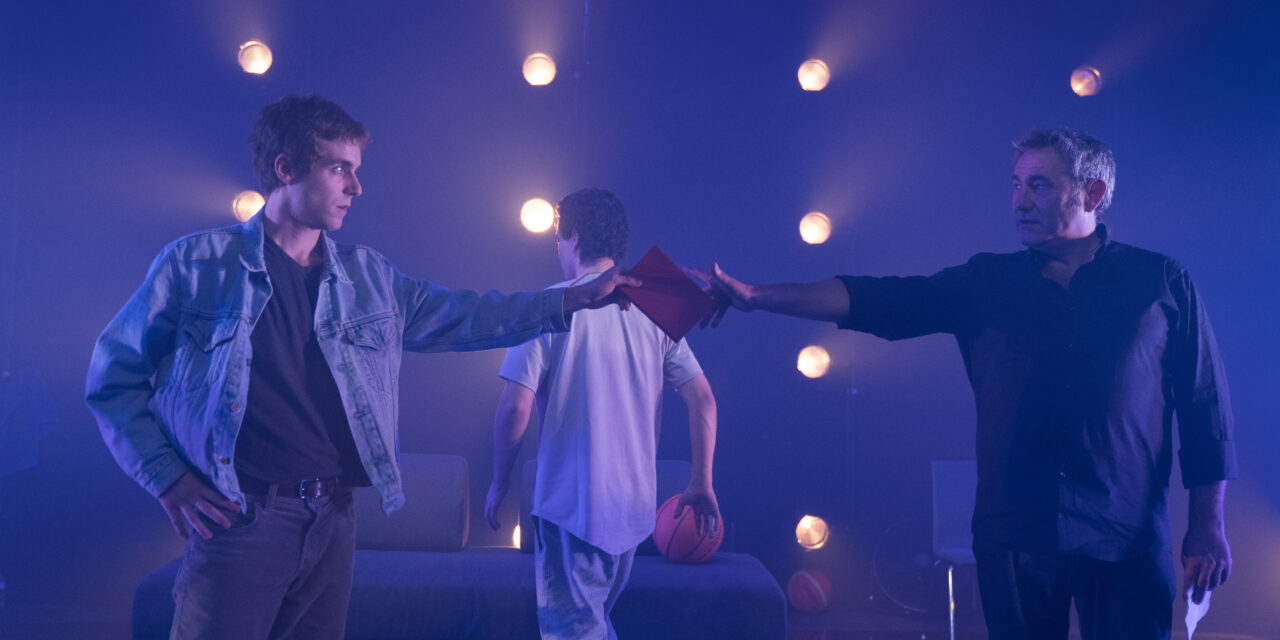 Guiillem Barbosa. Arnau Comas and Sergi López in "The Boy at the Back." Photo: Kiku Piñol

El chico de la última fila (English title The Boy at the Back) is one of Juan Mayorga’s most resonant plays. First produced in 2006, it has been translated into ten languages and adapted into an acclaimed 2012 French-language film directed by François Ozon, Dans la maison. An Italian production of the piece, directed by Jacopo Gassmann, opened at Milan’s Piccolo theatre in mid-March to rave reviews. The Sala Beckett, one of Europe’s most important new writing venues, has also presented a new production under the imaginative direction of Andrés Lima, who has worked with Mayorga on nine previous occasions. Boasting a top-notch Catalan cast, the production has just concluded a regional tour following its run at Barcelona’s Sala Beckett; it deserves to be seen further afield.

Mayorga’s play concerns the relationship between a secondary school language and literature teacher, Germán, and a teenage boy who habitually sits at the back of his class, Claudio. The latter delivers a homework assignment on what he did at the weekend that intrigues Germán in its voyeuristic precision. Germán’s wife Juana, who runs an art gallery, is unnerved by the boy’s forensic dissection of his classmate Rafa’s home and parents. Germán, however, decides to mentor Claudio with advice on creative writing and feedback on subsequent installments chronicling Rafa’s home life with mother Ester and father Rafa. Juana faces her own crisis as she is told that she needs to turn in greater profits at her gallery or lose the lease on it. Claudio’s obsession with Rafa’s family focuses increasingly on Ester but Germán seems unwilling to interfere.

Mayorga structures the play as a single act with scenes that flow into each other without demarcated breaks. Moving between the classroom, Germán’s home, and Rafa’s home, the three spaces bleed into each other in the writing. Lima opts to respect this fusion in his production, featuring a deceptively simple but highly effective design by Beatriz San Juan which deploys a single desk and chair, a moveable sofa (which converts into a bed) and a thin white curtain that occupies the width of the stage as the key scenographic elements. The curtain allows for an element of mystery: the audience first sees Rafa’s family standing behind it, repeating the lines of dialogue that Claudio has crafted from his initial encounter with them. It is both a reference to the stage curtain that marks out the fourth wall and a mechanism for demarcating different stage spaces. It camouflages and hides—and all characters have something to hide—but also exposes, when lit, what happens within.

There’s a real energy to Lima’s lithe production. Rafa (Arnau Comas) bounces across the stage like the basketball he uses to play with his father. David Bagés as Rafa senior, hoping to mold his son into a likeness of himself, is similarly buoyant. Claudio is always at the margins of the pair. His class difference is played out in a number of ways. His clothes are less stylish than Rafa’s, his breakdance routine creates a discordance of movement that ruptures the father-son complicity and the realistic register of the rest of the actors; the music that functions as his leitmotif is more discordant than that associated with the other characters. It is as if he moves to a different beat. Even when speaking with Ester, his position as an outsider is confirmed by the sound of the basketball in the distance evoking the complicit relationship between father and son.

Sergi López brings terrific manic energy to his performance as Germán. Where Fabrice Luchini in Dans la maison boated careful restraint, the Lecoq-trained Sergi López is larger than life, all flaying arms and volatile responses as he grapples in the opening scene with the students’ lackluster writing. He spreads himself across the desk as he laments the poor quality of the work but there’s a real shift—the music changing to underscore the moment—as he reads Claudio’s description of Rafa’s home and family. Claudio at first keeps a studied distance from his teacher who throws copies of works by Dickens, Chekhov, and Cervantes to him.  But as they engage in conversations over Claudio’s writing, the latter sits at Germán’s feet.

Lima provides an immersive production where actors move furniture briskly around the stage to conjure the different spaces.  At times, lines are spoken over each other as Germán reads Claudio’s essay out aloud to Juana (and the audience) and Rafa and his family repeat the lines a beat behind Germán. López’s Germán acts as a choreographer who puts Rafa’s family into a tableau—at one point taking Claudio out of the family picture—as if staging Claudio’s text. The staging asks perceptive questions about where agency lies and how Germán encourages and abets Claudio’s voyeuristic gaze. When Ester returns Claudio’s love poem to him, Germán and Juana watch as if confirming their involvement in the wider culture that generated the initial exchange. When Juana looms over him to confront him about Claudio’s invasive comments on Rafa and his mother, Germán shrugs off her concerns, “It’s a writing class, not ethics.” Lima’s staging decisions intervene slyly into the debates of the play—Germán may judge Claudio’s increasing obsession with Ester as tear-jerking and both the teenager’s love poem to and dance with Ester is framed against the backdrop of a floaty curtain, sentimental music, and romantic gold-hued lighting. Staging the cliché with all the mechanisms theatre offers brings it to life.

The Boy at the Back provides a playful contemplation of literary tropes, tricks, and techniques. Germán, once an aspiring writer, sees it as his mission to advise Claudio on purpose (“who am I writing for?”), storytelling (“people need stories”), narrative (“show not tell”), realism (“if it’s not realistic, it’s no good, even if it’s real”), titles (“The title commits. The title establishes a pact with the reader”), and endings (“the hallmark of a good ending. Necessary and unforeseeable”). He reprimands Claudio for over-relying on lists, a practice the teenager has picked up from Scott Fitzgerald’s Tender is the Night and classifies Claudio’s assignments as a bildungsroman.  Germán likes his categories and boxes. Both he and Juana have fixed views on what art should or should not do. “Art should illuminate the world, not spread confusion,” Germán tells Claudio, as he justifies why James Joyce has no place in his library. The lights come up in the auditorium as Germán makes a failed attempt to apologize to Rafa for making reference to all the errors in his written work in the public arena of the classroom. The audience becomes witnesses to Germán’s refusal to take responsibility for his actions.  Germán shares Letters from Berlin with Rafa as a way of trying to explain the misunderstanding. Easier to seek refuge in art than to make a direct apology. Juana argues that literature “doesn’t make us better people,” while Claudio tells Juana that “people don’t want art. They want decoration.”

There have been some minor changes to the text initiated by the actors and director—Juana’s art gallery is now called The Head of Medusa rather than The Minotaur’s Labyrinth. Sergi López appears as a cruel military officer in Guillermo del Toro’s Pan’s Labyrinth which may have created an extra-textual commentary on the original gallery name. The play, written as Spain was enjoying its last boom years before the economic crisis, makes reference to the culture of excess that sees Rafa’s father spend 300 euros on a dinner to woo a potential Chinese client. The need to impress the businessman, whatever the ethical implications, sees Rafa senior take the visitor to what appears to be a brothel—much to Ester’s disgust. Juana may see them as “a normal family” but Mayorga’s play scratches at the surface of what passes for normal with devastating results. “Is there not something abnormal, monstrous even, in the very idea of a family?” Germán retorts.

An undercurrent of social unrest lies under the surface of the writing. There is a reference to the youth revolts in the Paris banlieues in 2005 and 2006 as the primary television news item. Rafa senior may see the riots as the way these young men “vent their frustration at the system,” but he too opts for violence, burning his boss’s car, in anger at the way he feels he has been treated. Claudio’s tactics show that there are many ways of articulating frustration. It is Claudio rather than Germán who is seen to follow Edward George Bulwer Lytton’s adage that “the pen is mightier than the sword.” Even Germán, at the play’s end, can’t secure the ending he wants from Claudio. Germán seemed happy to engage with Claudio’s prose when the teenager was dissecting Rafa and his family’s middle-class mores but when he intrudes on Germán’s space and enters his family home with Juana, he candidly threatens violence. At the play’s end, as the curtain is lowered to shoulder level, Rafa, Ester, and Rafa senior watch the action from the protective distance it offers. Claudio provokes Germán with words and Germán retaliates with violence, a slap that resonates to provide Claudio with a dramatic ending to his narrative.

Lima’s pacing accentuates the text’s thriller-like qualities, creating a creepy sense of unease at both Claudio’s voyeurism and German’s encouragement of the young man’s actions. “To be continued,” deployed by Claudio at the end of each installment, keeps the audience hooked and guessing. Jaume Manresa’s eerie sonic landscape—with nods to Bernard Herrmann’s scores for Hitchcock—further heightens the sense of foreboding. At one moment Claudio creeps through Rafa senior and Ester’s bedroom as they sleep, delicately removing the latter’s sock in a horrific gesture of violation. The physical proximity between Germán and Claudio as they look out at the audience speculating at what might be happening through the windows they can see from Germán’s home in the play’s final scene is genuinely unsettling. The curtain keeps characters out of sight in tantalizing ways; we cannot be entirely sure of what is happening behind the curtain and this underlines the fine line between what may have happened and what was invented by Claudio or construed by Germán in the act of reading. Meaning making is shown to be a complicit act in The Boy at the Back.

The cast is uniformly excellent. Míriam Iscla’s Juana in minimalist black has a strident sense of purpose. Anna Ycobalzeta presents an overtly feminine Ester with flowing blonde locks, a soft voice and a striking red dress in which she appears to float across the stage.  It is as if she an embodiment of Claudio’s imagined ideal of motherhood. David Bagés provides Rafa senior with a convivial, laddish exterior which masks rampant self-interest and highly problematic assumptions about class and gender that look likely to be embedded in his son. Arnau Comas’ Rafa with his mass of curls and casual sporty look has something of a bounding toddler about him; it provides a veritable contrast to Guillem Barbosa’s lean and hungry Claudio. López expertly fuses exuberance and wry cynicism as the seasoned teacher increasingly out of his depth. Seeing the production at Sabadell’s Principal theatre on the last day of its Catalan tour, I can only hope that there’s a revival on the cards so that audiences outside Catalonia are given the opportunity to see this crisp, impressive staging of one of the twenty-first century’s most important plays.

Juan Mayorga’s The Boy at the Back is published in Teatro 1989-2004 (Segovia: La Rota, 2014). The quotes for this review are made from the English translation by David Johnston, produced by BBC Radio 3 in 2014.