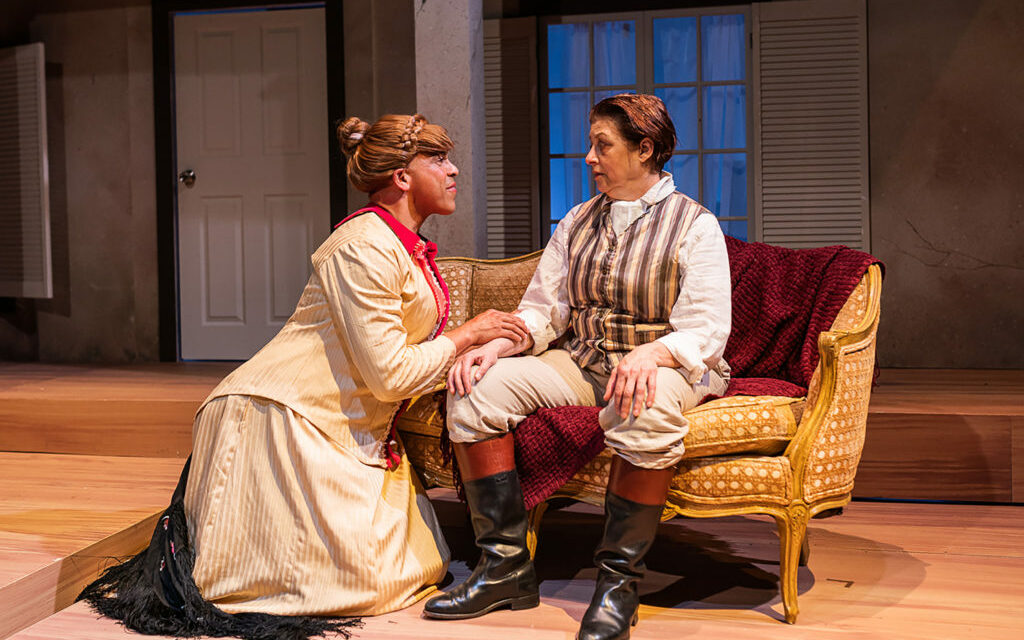 Caryl Churchill’s brilliant two act play about sex Cloud Nine transpires in two eras and two places, the Victorian in British colonial Africa and the 1970s me decade in London. Various characters are played by actors whose genders and in some cases their ethnicity differ from the role they are playing.

For example, Joshua (Marge Dunn), an African servant in the household of a wealthy British family is portrayed in this production by a blond white woman dressed as a man while Betty (Joshua Wolf Coleman), Clive’s wife, played by a very tall black man wearing a blond wig, wants only to please her husband and is dependent upon him to make decisions. Besides being the master of the family, Clive (Stephanie Clayman) is an administrative officer for the British government. The couple has two children, nine-year-old Edward (Sophorin Ngin) who is effeminate, and Victoria, who is a doll. Edward, performed by a woman, would like to please his unaware father by becoming masculine, but it is impossible for him. Clive’s mother-in-law Maud (Kody Grassett) also lives with them as does Edward’s governess Ellen (Aislinn Brophy) who is in love with Betty.

The performance begins with the family standing in front of their house singing Come Gather Sons of England, a clever comic anthem written expressly for Cloud Nine with lyrics by Caryl Churchill and music composed by Michael Rasbury.

To her dismay Clive informs Betty that Harry Bagley (Alexander Platt), an explorer is coming to visit. She seems uncomfortable with the idea. Before he arrives, Mrs. Saunders (Aislinn Brophy), a widow comes to the house to take refuge from the natives who are acting up. Clive tells Mrs. Saunders she was right to ask for his aid that he “would have been insulted by any show of independence.” However, Mrs. Saunders brought her own gun, a sign of her grit.

Harry Bagley and Betty are former lovers who still feel attracted to each other. Nonetheless, Betty runs off. Joshua turns out to have had an affair with Bagley as well and the two go to the barn to have sex. Later we discover that Bagley also had an affair with Edward which the boy wants to continue. Clive and Mrs. Saunders also indulge.

Betty confesses her love for Harry Bagley to Ellen who tries to convince Betty that she idolizes her. Betty does not understand and continues to talk about Bagley.

In the next scene the women are inside the house. The men have gone off to flog the natives. Except for Mrs. Saunders the women know very little about what is happening. Edward who is too young to be with the men begins to play with his sister’s doll and is immediately rebuked and then slapped for his girlish behavior.

Clive returns and talks to Betty. It is clear from his conversation that he knows about Betty’s affair with Harry Bagley. He talks about female lust but does not recognize his own infidelity with Mrs. Saunders. Betty begs for his forgiveness.

The scene ends with everyone singing A Boy’s Best Friend who is of course his mother.

The following day Harry misunderstands Clive when he talks about men’s friendship “as the noblest form of relationship” and makes a pass at him to Clive’s consternation. Clive decides that Harry must redeem himself and he does by marrying the lesbian Ellen.

The second act which is less comical than the preceding one takes place in a park in London in 1979 although for the few characters that reappear only twenty-five years have passed. Two women, Victoria (Sophorl Ngin), the former doll, and Lin (Marge Dunn) a lesbian, are both mothers who meet for the first time. Cathy, Lin’s five-year-old daughter is acted by Aislinn Brophy. She is bold, likes pretty clothes, wants to play with boys, enjoys painting pictures, uses vulgar language, and fears her mother will leave her. Victoria has a son Tommy who is mentioned but never seen. Lin attracted by Victoria flirts with her and they become lovers. Victoria has a husband Martin (Joshua Wolf Coleman) who does not get along with her, although he believes he is doing his best. He is unfaithful and tells her what to do.

Edward (Alexander Platt) shows up and warns Victoria that their mother is in the park. Lin asks Edward if he is gay, upsetting him. He claims he is afraid that he will lose his job, but more likely he is uncomfortable that his sexuality is obvious.

Betty (Stephanie Clayman) resurfaces with her Victorian views still mostly intact. In the following scene Edward and his lover Gerry (Kody Grassett) quarrel. Edward is disturbed by Gerry’s constantly seeking other partners. Eventually Edward moves in with his sister and Lin, the three of them sharing a bed.

The play ends with Betty and Gerry having a heart to heart. The Betty from Act I enters and the two women embrace. Betty has accepted herself.

Lee Mikesa Gardner, artistic director of the Nora Theatre Company directed it with imagination and skill. The seven actors, all of whom play two roles are excellent.

This article was originally posted on http://capitalcriticscircle.com by Jane Baldwin on the 28th of June 2019. Read the original article.