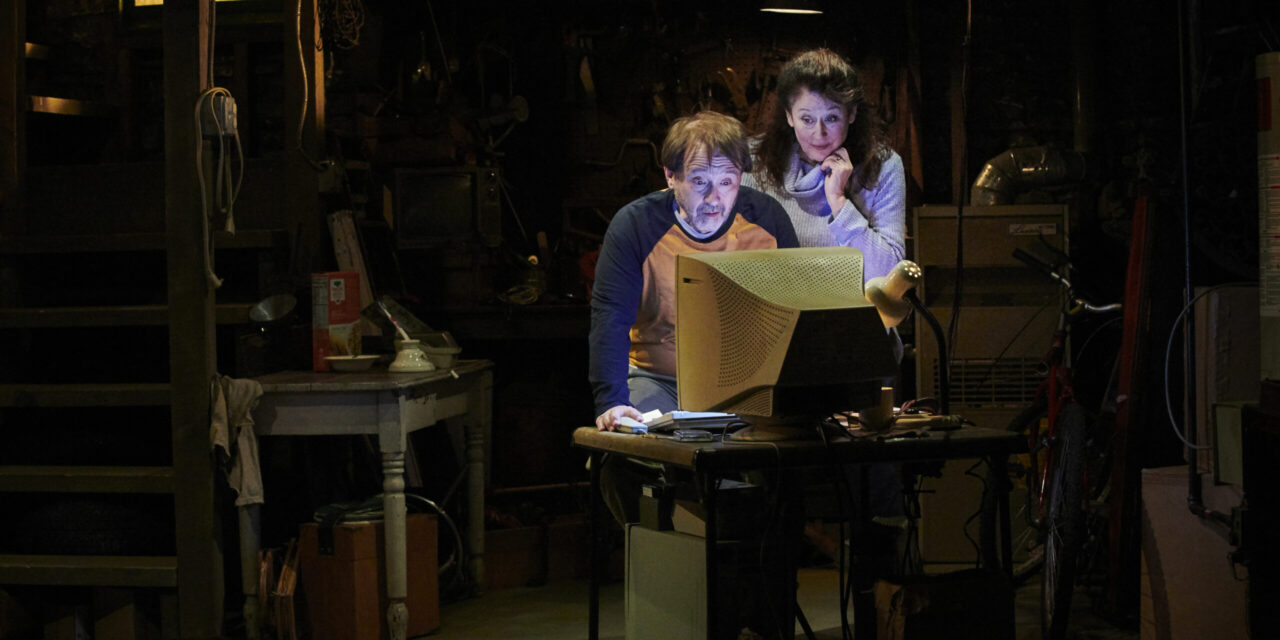 In Jungian psychology, the house symbolizes the mind, with the basement representing the deepest part of the subconsciousness. As in the physical world, that psychic basement is a place crammed with all the “stuff” you can’t or won’t let go of – stuff you might need one day, or no longer need but aren’t ready to discard – along with all sorts of stuff you use regularly but don’t want to make space for “upstairs.” It’s a place of memories, and also a place that is a bit dark and scary; you never know what you might find when you start digging around down there. Were the psychic house a globe from the 16th century, the basement might bear the warning: “Here be demons.”

In Theresa Rebeck’s play Downstairs, the demons that occupy her characters’ psychic cellars are the main subject of interest, so – fittingly – she sets her action in a cluttered, junk-filled basement. Teddy (Martin Giles) has taken up residence in the downstairs of the home of his older sister Irene (Helena Ruoti) and her husband Gerry (John Shepard), claiming the need for “a haven…a life raft” from vaguely described conflicts at his workplace. It becomes quickly clear that Teddy is not particularly high-functioning: pill bottles on the nightstand next to the sofa he’s using for a bed suggest that his psychological coherence depends on the medication, and a rambling story about being poisoned at work hints that he may not always be fully in touch with reality. But he is intelligent and has the kind of keen insight into other people’s motives and feelings that is often characteristic of people who seem “crazy.” Perhaps for that very reason, his presence in the basement is an irritation to Gerry, and this puts Irene in a bind: she doesn’t want to evict her brother, but she also doesn’t want to make her domineering husband angry. That’s the conflict at the heart of this keenly observed play: Teddy wants to stay, Gerry wants him out, and Irene is caught in the middle.

Rebeck musters a great deal of suspense out of this straightforward conflict, primarily through a slow reveal of the extent to which all three characters are psychologically damaged. Teddy’s mental instability is most evident, stemming in part from having suffered physical abuse from their psychotic mother. Irene seems, on the surface, to be more together, but she confesses to feeling overwhelmed by simple tasks like mailing a package and harassed and hated by her own clothes. And while Gerry prides himself on being a “normal” guy who – alone of the trio – can successfully navigate the world of rules and jobs and norms, as the action unfolds we come to learn that the basement of his psyche is by far the scariest place in the play.

The first ten minutes or so of the production at City Theatre had me worried – Giles opens the play with a comedically ostentatious silent opening sequence that is at odds with the fourth-wall realism Rebeck’s script calls for, and it seemed to take a few exchanges of dialogue before he and Ruoti fully locked into character. But once they did, the brother-sister relationship, with all its complexities, conflicts, anguishes, and fathomless bonds, blossomed into life. The character of Teddy could be rather unlikeable – he’s something of a social loser, blunt, combative, and at times barely comprehensible – but Giles gives him a vulnerability and softness that has you rooting for him. It’s not hard to believe, from the way Giles limns the character, that he was once Irene’s beloved baby brother. As Irene, Ruoti conveys a profound sadness and despair underneath her character’s flighty irresolution, and she makes the character’s need for connection palpable. John Shepard’s Gerry ratchets up the tension of the play a hundredfold with his entrance on the scene: seeming at first to be merely a mean-spirited bully, by end of the play it’s clear that he represents the kind of sociopath who rises to power in all sorts of situations by dint of his capacity to hide his inner lunacy behind a calm, cool façade of social normalcy. Director Marc Masterson shapes the arc of the play with a sure hand, and with the help of Steve Shapiro’s strange and ominous sound design, he builds a gripping tension that gets gratifyingly released at the climax of the action (at the play’s “ah-ha!” moment, a patron behind me hissed “Yes!”). The storytelling is marred, however, by a small but significant bit of staging that inadvertently introduces an implausibility into the world of the play: when Gerry first comes down the stairs, he catches Teddy monkeying around with a supposedly “broken” old computer that Gerry keeps in the basement. But Gerry evinces no curiosity or anxiety about what is on the screen in front of him, even though the information that Teddy has just pulled up becomes a key plot point (and a major concern for Gerry) later in the play. Given what we later find out about that information, his insouciance regarding the computer at this moment is puzzlingly out of character.

But let’s get back to where we started: the junk we all keep in our basements, both actual and psychic. Tony Ferrieri’s reproduction of a suburban basement is detail-perfect, down to the wood-slatted laundry cage hanging from the ceiling and an old tire stashed behind the stairs. Yet, oddly, it’s impossible to puzzle out the floor plan of the imagined house above, given the location of the door to the ground floor. I initially thought this must be a mistake, but the more I consider it, the more it seems of a piece with Rebeck’s sensitive and perceptive rendering of the relationship between the darker recesses of the mind and the presentation of a coherent self. Like Ferrieri’s imagined house, the architecture of the mind is never as logical or discernible as we would wish it to be, and Rebeck’s play is a cautionary tale about the demons that dwell beneath even the most orderly-seeming abodes.

This article was originally posted in The Pittsburgh Tatler on 21 January 2020, and has been reposted with permission.