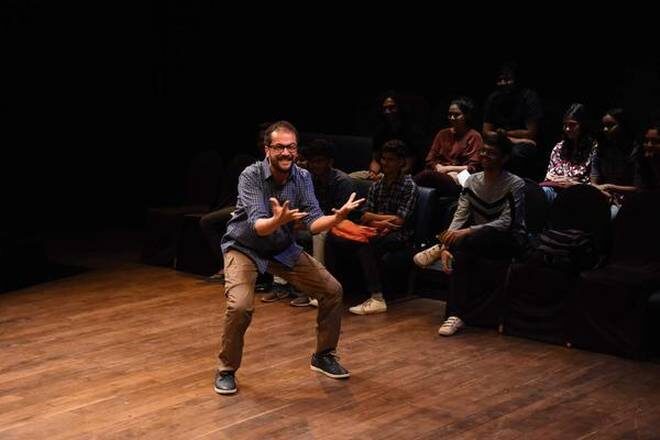 Vivek Madan in "Every Brilliant Thing." Photo courtesy of thehindu.com

It makes sense and feels good that two of the top 5 plays deal with mental health issues.

Continuing with a tradition that has been bordering almost 10 years now, I asked a bunch of theatre folk (150 this time, mostly from Mumbai) to vote for their favorite play in 2019. And as is now the norm, this article is about the information we gathered.

The results this time were somewhat unusual. Usually, we have at least 8 to 10 plays with lots of votes, and then a smattering of others. But this year, we have just five productions with lots of votes, and then a big gap, followed by a hell of a lot of plays bubbling under. I don’t have any ground-breaking inference, except that I think that members of this sample have been expanding their horizons as audience members. A case in point is actor-choreographer-director Amey Mehta, who recently posted that he watched 17 plays in 2019, across genres and styles, which is a commendable figure.

In the past couple of years, mental health has become a topic of much concern and healthy discussion. It both makes sense and feels good that two of the plays in the top 5 deal with this, the first of which tops the list as the most loved play of the year.

Every Brilliant Thing by Duncan Macmillan and Jonny Donahoe — A one-man show, performed with ease and effervescence by the underexposed and underrated Vivek Madan and deftly directed by the wonderful Quasar Thakore Padamsee. This is a highly interactive show, with the audience members participating, some even stepping in to play characters. I’m usually petrified of engagement while watching a play, but this production made it so organic that it didn’t bother me one bit. It is also an important play, about a man trying to compile a list of things that make life worth living, prompted by his mother’s attempted suicide when he was just a boy. A moving, must-watch experience that, in my opinion, deserves to be top of the heap.

It also makes me happy that I was involved with two of the top 5 plays, as was Padamsee, who took on the very difficult task of lighting the play with the second-highest number of votes: The Kite Runner by Matthew Spangler, based on Khaled Hosseini’s novel. Also the first of the two Aadyam productions on this list, the advance booking of this play made me realize what a phenomenon the novel is — nine sold-out shows in massive venues. Spangler has pulled off the impossible and managed to siphon the essence of the novel into a two-hour script. Despite being set in Kabul and San Francisco, against the backdrop of the politics of Afghanistan and the U.S., the human story at the core of it seemed to strike a chord with Indian audiences.

Next is another play on mental health: What Planet Are You On? deals with a schoolboy who realizes he has attention deficit disorder (ADD) and his journey then on. Siddharth Kumar, well in his 30s, plays the protagonist from ages 9 to 13 in an endearing and sincere performance. This is a feel-good play that has resonated with parents and teachers as much as children.

Rounding off the top 5 is another Aadyam production, A Few Good Men directed by Aadyam Doyen Nadir Khan. This play by Hollywood writer Aaron Sorkin is what the movie was based on. Rajit Kapur played the part made famous by Jack Nicholson, while Neil Bhoopalam and Ira Dubey took on the roles essayed by Tom Cruise and Demi Moore. The production remained gripping, and the actors brought new things to the roles, particularly Bhoopalam, who infused an irresistible, quirky energy into Daniel Kaffee. Also, the play had one of the finest sets I have seen on the Indian stage. Hats off to the production designer.

There is a whole bunch of plays in the ‘bubbling under’ category that got a significant amount of love. Motley’s Aurat Aurat Aurat, a collection of pieces by Ismat Chugtai, and Adishakti’s Bali, a retelling of an episode from the Ramayana, have been around and popular for a while. Baksa, a play with no dialogue, from the latest edition of Thespo, was widely appreciated. A production from Delhi, Bhagi Hui Ladkiyan, made some waves and received a jury mention at the Mahindra Excellence in Theatre Awards. Mohit Takalkar’s Chaheta, adapted from a Palestinian play, added to his impressive oeuvre; Man Maana Square, which premiered at Thespo 2018, continued to win praise. And last but not least by a long shot, the new Patchworks Ensemble production, Shikaar, a devised comedy about chudails (witches), seemed to have earned a loyal following. I’m hoping to catch the next shows of some of these.

The theatre producer and director is often broke. To cope, he writes and directs films and web series and occasionally acts, albeit reluctantly.

This article was originally published at thehindu.com on January 11th, 2020. To read the original article, click here.