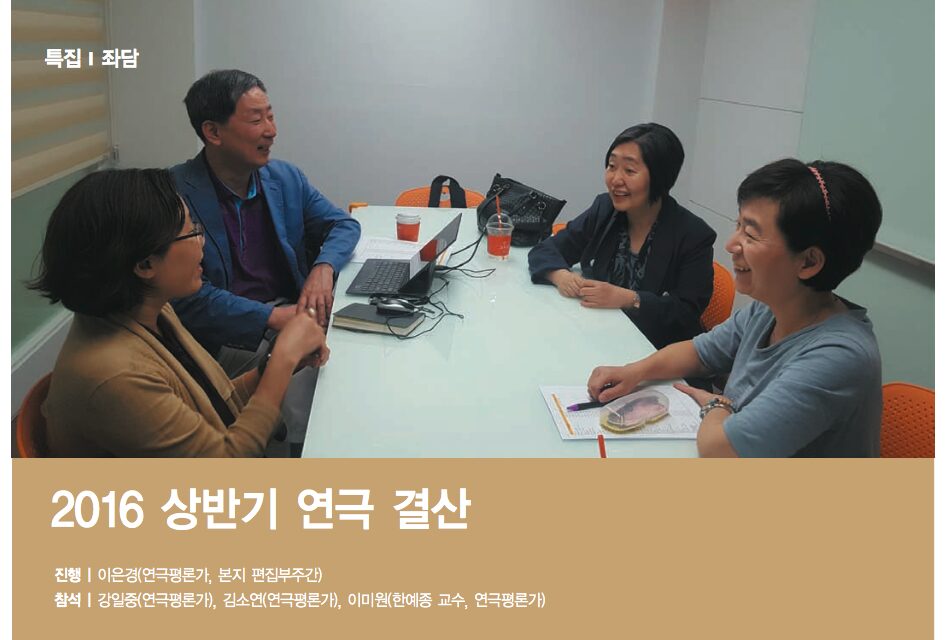 Compared to productions of Western or Korean classics, Broadway revivals or original musicals, venues for new works are still widely underdeveloped in Korea. With the recent growth of the Korean-produced original musical theatre market, many theaters and organizations have increased their support for new plays. More and more artists are participating in discussions about how new plays are reflecting contemporary concerns and what kind of role they are playing in the contemporary culture. While development opportunities for new works are still in need of more systematic support, it is invigorating to see emerging playwrights and directors gaining professional support and attention for their unique voices.

For the June issue of The Korean Theatre Review, four prominent Korean theatre critics sat down to share their perspectives on the Korean theatre scene in the first half of 2016. The participants were Eunkyung Lee (critic, editor of The Korean Theatre Review), Ilchoong Kang (critic), Soyeon Kim (critic), and Miwon Lee (critic, professor at Korean National University of Arts). They talked about the productions of the Korean National Theatre, theatre festivals, new play programs, and professional theater companies. The original article is a document of their whole conversation. This article summarizes their discussion about the new voices in Korean theatre.

Lee expresses her joy that there has been an increased institutional support for developing new voices by “AYAF (ARKO Young Arts Frontier Grant)” sponsored by ARKO (Arts Council Korea), “New Stage Festival” (a festival for new directors) at Seoul Theatre Center, Sanwoollim Classical Repertory Theatre, and the spring festival of new works co-sponsored by the experimental theatre company Hyehwadong Lab and the foundation CJ Creative Minds. One of the outstanding new plays, according to Kang, is Doorbell, written and directed by Yoojin Seol. The play uses the motif of the doorbell as a symbol to address the absence of communication among family members. (youtube link attached) The skilled performances, as well as the tightly written script, brought the melancholy atmosphere to full life on stage.

While many new voices got their first taste of professional development, a concern is also expressed regarding the overall quality of the productions. Kim addresses the hasty production process that could prevent an idea from growing into maturity and readiness for the stage. E. Lee praises the cathartic energy of Hyehwadong Lab’s Brave New World, directed by Soojung Kim. Nevertheless, she acknowledges that the production’s focus on unrestrained physical catharsis overshadowed the plot and characters, which are essential elements in Huxley’s original novel. The result, she thought, was gratuitous discomfort. Kang attributes the discomfort felt in the director’s work to her intention of confronting the audience with an impression of the distortion and corruption of contemporary society. The discomfort, Kang says, is an essential part of her piece.

Founded in 2013, the Sanwoollim Classical Repertory Theatre had its first theme-driven festival this year. With the theme of Greek mythology, four directors presented their adaptations. Kang was especially impressed with the Gipeum Lee – directed Hera, Aphrodite, Artemis, which offered a humorous feminist spin on the three goddesses’ views of contemporary love. The four critics proceeded to a critical discussion of the works of professional theatre companies, which were mostly productions of western classic translations (Shakespeare, Chekhov) or Korean classics (Shimchung), and some new plays. This column will provide more updates on new works development in Korea. 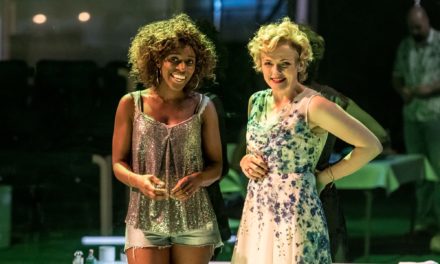 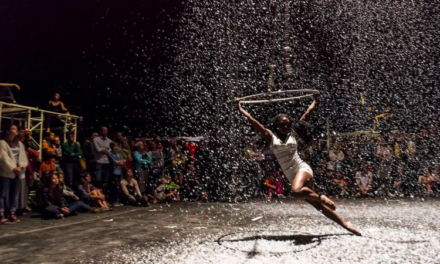