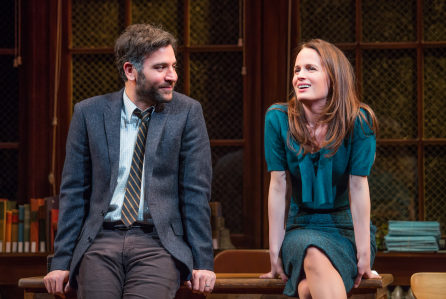 Anyone so inclined could find plenty of reasons to carp about The Babylon Line, Richard Greenberg’s new play at the Mitzi Newhouse Theatre. It is oddly, defiantly equivocal, pursuing numerous plot threads that seem like they ought to be secondary and leaving several juicy character conflicts undeveloped. Its use of Levittown, NY, as a setting for thick-headed suburban malaise borders on cliché. And it dithers among six different endings rather than committing to one. The production by Terry Kinney is also, uncharacteristically, clumsily staged.

Nevertheless, I liked this play, largely because it foregrounds creative writing—not the romance or glamor or prestige of it but the actual craft and labor of it as well as the relentlessly precise attitude toward language that must underlie it.

The action takes place in a 1967 adult-education class at a high school in Levittown. Most of the students have enrolled only because the classes they really wanted, like Contemporary Events and Flower Arranging, were full. The instructor Aaron Port (Josh Radnor) is an acerbic 38-year-old with just a single story published who reverse-commutes from Greenwich Village and clearly doesn’t like teaching, not in this proudly bland place anyway.

Aaron narrates the action as a memory play, and inasmuch as the focus is his internal creative struggle externalized as a thwarted love affair, the plot amounts to yet another cliché. Restless, quirky and fetching Joan Dellamond (Elizabeth Reaser), who arrives late and proves to be the class’ only talented student, flirts outrageously with him, and his resistance to her exposes his overcautiousness and (we’re meant to assume) probably explains his writer’s block. So far so formulaic.

What lifts The Babylon Line above this worn pattern is the amount of time Greenberg devotes to examples of the students’ mostly awful writing. That is a huge risk. Most playwrights, in dramatizing a writing workshop, would find safer ways to spice things up, maybe with quotes from masters as Dead Poet’s Society does with Whitman and Shakespeare. Greenberg instead relies on a hilarious parade of ungainly, halting and crushingly trite passages from a motley crew of pupils we’re glad to spend time with (a trio of Jewish matrons, a curt Korean war vet, a guy who fried his brain with drugs), giving us the fun of playing surrogate teacher and critic. Greenberg doesn’t merely jeer at these prosaic people. He also marks baselines for improvement, which several of them do show. More important, he uses them as foils for standout Joan, who is inspired, and openly invites us to judge for ourselves whether her stories really are as good as Aaron’s reaction suggests.

Here’s an example, recited by Reaser in her character’s sultry, Tennessee Williams drawl:

The infant was not to be deflected. Clearly a baby with imperialist tendencies, it continued to reconnoiter what she still only so tentatively thought of as “her” living room . . . Luckily, this baby, seemingly so adventuresome, was, in truth, the spirit of inertia incarnate – it would tend to rest or move as it was acted upon. A little boot over the threshold and it was gone, before she even learned its sex. She closed the door, locked it, and returned to her chair. She was alone, true enough, but she was uncaught.

I don’t want to overstate my case here. There’s way too little evidence to dub Joan a Chekhov or Cheever or Colette (whom she loves). Nevertheless, the wry bemusement behind that “deflected” and “imperialist,” the utterly unsentimental detachment of “reconnoiter” and “acted upon,” the electrical surprise of the closing “uncaught.” This sort of word choice is a big part of is what we mean by writerly talent, and its use as a pivot of dramatic suspense and recognition in an otherwise conventional play made me forgive the work all its blemishes.

Joan has spent years closed in her house. She says (ostensibly about her character) and her hunger for emergence and fruitfulness: “Over seven years she had become as thin as a sentence, shadowy as a prayer. She wanted more.” It’s a cause for some celebration that part of Richard Greenberg, after more than two dozen plays, feels the same way. 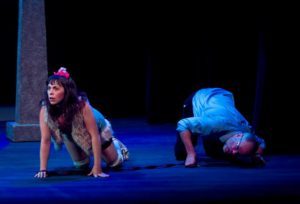 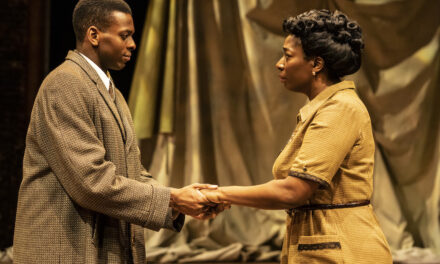