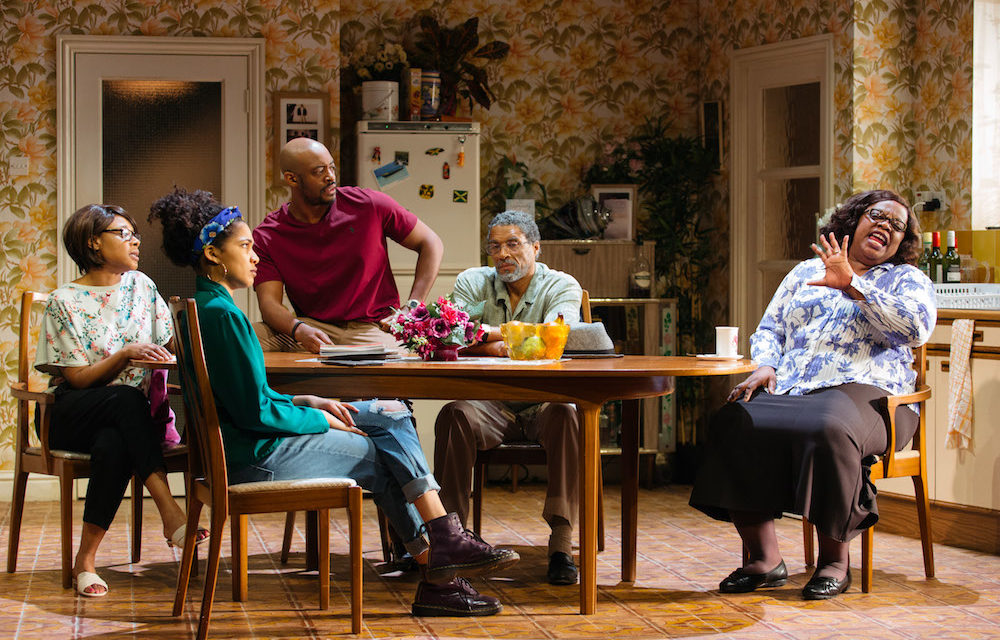 The good news about so-called black drama on British stages is that it has broken out of its gangland violence ghetto and now talks about a whole variety of other subjects. Like loss. Like death. Like mourning. So London-born actress Natasha Gordon’s warmhearted play, Nine Night, now making its first appearance at the National Theatre, is as much about family, music, and mourning as it is about ethnicity or migration. Inspired by the ritual of Jamaican funerals, in which the final ninth night of a wake is the time that the deceased’s spirit must finally leave this world, the play looks at grieving and tradition.

Set in the London home of Gloria, who is dying of cancer, this rather traditional family reunion play looks at how each of her grown-up children—Trudy, Lorraine, and Robert—react to her passing. For the sake of realism, the family situation is quite complicated: Trudy was bought up in Jamaica, where Gloria came from in the 1950s, while Lorraine and Robert were born in Britain. Lorraine has been looking after her mother for the past three months, helped by her 20-something daughter Anita. Robert is married to the white teacher Sophie, and Gloria’s cousins, 70-somethings Maggie and Vince, are likewise guests.

After Gloria’s death, her body remains unburied as the family takes part in the traditional Jamaican “nine night” wake, which involves lots of food, music, dancing, religious hymns, improvised poems, and lots and lots of stories. Naturally, the family conflicts soon begin to bubble over. Robert is a businessman whose plans have gone awry, so he wants his sister Lorraine to sell their mother’s house immediately to raise some cash. But Lorraine has other ideas: she points out that the house is not a property, but a home—and that their mother’s spirit has not yet been released. Meanwhile, there’s a secret pregnancy in the family which threatens to disrupt things even more.

This is a play that is full of spirit, and spirits. Both alcoholic, and of the dead. Gordon uses lashings and lashings of old-world beliefs as well as Jamaican verbal acrobatics, her comic one-liners creating moments of complete hilarity, supplemented by sage sayings: “Be careful, not carefree;” “When yuh get to Heaven, yuh see, God will deal wid yuh;” “Save yuh eye water, niecey.” The linguistic mix of England and the West Indian verbal rhythms gives the dialogues a high energy, and Gordon balances humor and seriousness. She is very good at showing the diversity of grief and loss. And there is plenty of fun amid the tears and some lovely exchanges.

The faults of Nine Night are the faults of the first-time playwright. Gordon has crammed in too much detail, with the result that despite a powerful ending, with spirit possession and talking in tongues, there are too many loose ends to make for a fully satisfying story. Some scenes are unnecessary, and there’s a lack of focus in the narrative. Conflicts remain unresolved, and the running time of 110 minutes is too short for the material. Still, in compensation, there are many delightful sequences: Robert’s puzzlement when he volunteers to prepare chicken wings; a story about putting Vaseline on a dead woman’s feet to ease on her stockings before burial; Maggie’s speech in praise of her Freedom Pass.

Director Roy Alexander Weise’s production, designed by Rajha Shakiry, doesn’t quite achieve the required blend of music and dialogues, with one dance sequence performed in semi-darkness, but his cast does him proud. Cecilia Noble’s Aunt Maggie is a thoroughly memorable larger-than-life creation, bursting with humorous vigor and dominating any scene she finds herself in. Franc Ashman as Lorraine, Hattie Ladbury’s Sophie and Oliver Alvin-Wilson’s Robert provide good emotional grounding and are well supported by Rebekah Murrell’s Anita. Ricky Fearon’s Uncle Vince gets his poetic Shakespearean moment and dispenses lots of wisdom, while Michelle Greenidge’s Jamaican Trudy is sublimely lively.

Our current affection for the Windrush Generation makes this play timely, and many of the lines suddenly sound more relevant than ever. When Trudy says, “Everyting for oonuh in Ingland is money, innit?” and when she expresses her pain at being left alone in Jamaica when her mother came to London, a real tang of the contemporary crosses the stage. Likewise, the shortcomings of the present care system are evident from the start. These aspects of Nine Night touch a chord and go some way to making up for some of the playwright’s inexperience. Okay, it’s a feast of a play, but some parts remain undercooked.

Nine Night is at the National Theatre until May 26.

This article originally appeared in Aleks Sierz on April 30, 2018, and has been reposted with permission.