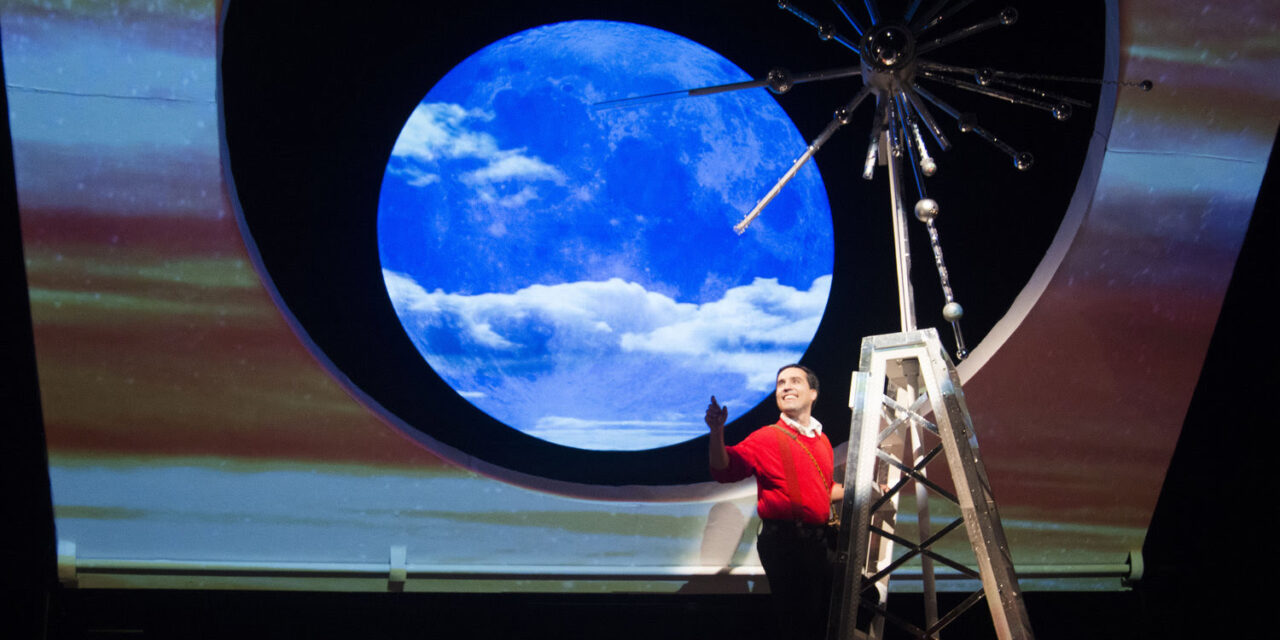 How do we continue forward without the great opera houses open?  It is an extraordinary moment for those who sit and listen to the best acoustics while seeing an extraordinary cast of singers.  Encompass New Opera Theatre might have the right alternative for you, with The Astronaut’s Tale with music by Charles Fussell with libretto by Jack Larson, originally performed at the Brooklyn Academy of Music in 2016.

Now, the production directed by Nancy Rhodes and conducted by Nicholas DeMaison is available on YouTube.

“Listen to me now.

Because the universe is whole, everything, depending upon the relative motion of the observer, is ultimately equivalent to and transforms into everything else.

Matter is equivalent to energy, acceleration to gravity, time to space.

To escape gravity, you must accelerate beyond it.

– From “The Astronaut’s Tale” with libretto by Jack Larson

Christopher Vettel portrays The Narrator who tells the story of Abel, the Astronaut, portrayed by Eapen Leubner.  Losing his dog at an early age, growing up on a farm, meeting his girlfriend, Ann, played by Lianne Gennaco, Abel sings about wanting to become a scientist and join the Air Force.  We see his growth, throughout time, and the storytelling that includes Peccavit, the Peddler, played by Frank Basile, is easy to follow.  Finally taking part in a Space Shuttle Launch, Abel’s early notions of God are tested in a journey toward the heavens.

Many of us remember that tragic day in the 1980s when the Challenger blew up.  It was alarming, as upsetting as the news that President Ronald Reagan was shot.  While we believed in the upward mobility of America in every way, we became shockingly aware of our tragic limits.  In The Astronaut’s Tale, we get every sense of looming and desperate failure existing side-by-side with the wish for achieving greatness.  Rooted in a fundamental belief in science and an allegiance toward space exploration, Abel’s journey begins at minus 15 years.  Beyond a perceived void, there is the mesmerizing journey in discovery.  An echo in space can create a vacuum-like reverberation.  Like a wind tunnel, there can be more absence than presence of tone.  Yet, when a sound is made a sound must be heard.  Those who are God-fearing find this to be an extraordinary listen, as the libretto echoes spiritual passages we have heard so often.  At this exceptional time in world history, during a pandemic, it is interesting to consider time within the context of a countdown and a race to space.  It has an increase of tempo that is predictable, but a conclusion that is devastating.  It reminds us of those little things, the anxieties that occur when remembering to cancel one’s ATM card after a wallet is misplaced.  The larger ideas are juxtaposed with the trivia of the everyday.  What do these calculations, these numbers, mean in the larger world?

“Not by a jeweled rainbow, not in cloud-capped skies;

Our Astronaut’s dream was to be in outer space,

But our afterlife is in the inner space where we dream.

By the energy of matter’s universal scheme

Planetary life is nourished in the spheres,

From the outside stars to flesh to eyes to mind.

When we come to the last breath of human kind

It’s into inner space that the dreamer goes,

In that continuum of mind dreamt in the cosmos.”

At its core, the opera brings to the stage the inspired ambition of man meeting the measure of what is large and small in the world.  Yet, is it a story of Man vs. Machine, with nature being a type of savior?  Life in a simple farmland grows more complex as duty increases.  The grace of the female is accentuated after Abel joins the Air Force, and a few light dances bring a bit of joyous simplicity to the weighty opera, filled with the story of an enormous sense of responsibility and the daring thematic material of men challenging God.  In the recorded video, the horns overpower the Singers, and strings provide some levity.  In the cappella music, the singers have a great command of the phrasing, in the concise work that runs just over an hour.  However, the overall composition sometimes feels lofty and short of triumphant.  Within the flaw of the recording, the music is not balanced in the best possible way to hear their voices raised in song.

Scenography allows for drift, in what might be misinterpreted as only ponderous material.  Most striking about the presentation is the video work by Paula Poulafearh with projections designed by Lianne Arnold.  While we see a simple ladder and exactly what we know to be a Moonman’s suit, we imagine something far greater.  The set design by Stephen H. Carmody becomes incredibly realized, as a rooftop closes down and a round window shows a space shuttle in the background.  We see orange blasting into blue, the cool and warm tones almost colliding as darting angles remind us that the skies are filled with more than beams of light, looking like shards of chandelier pieces. 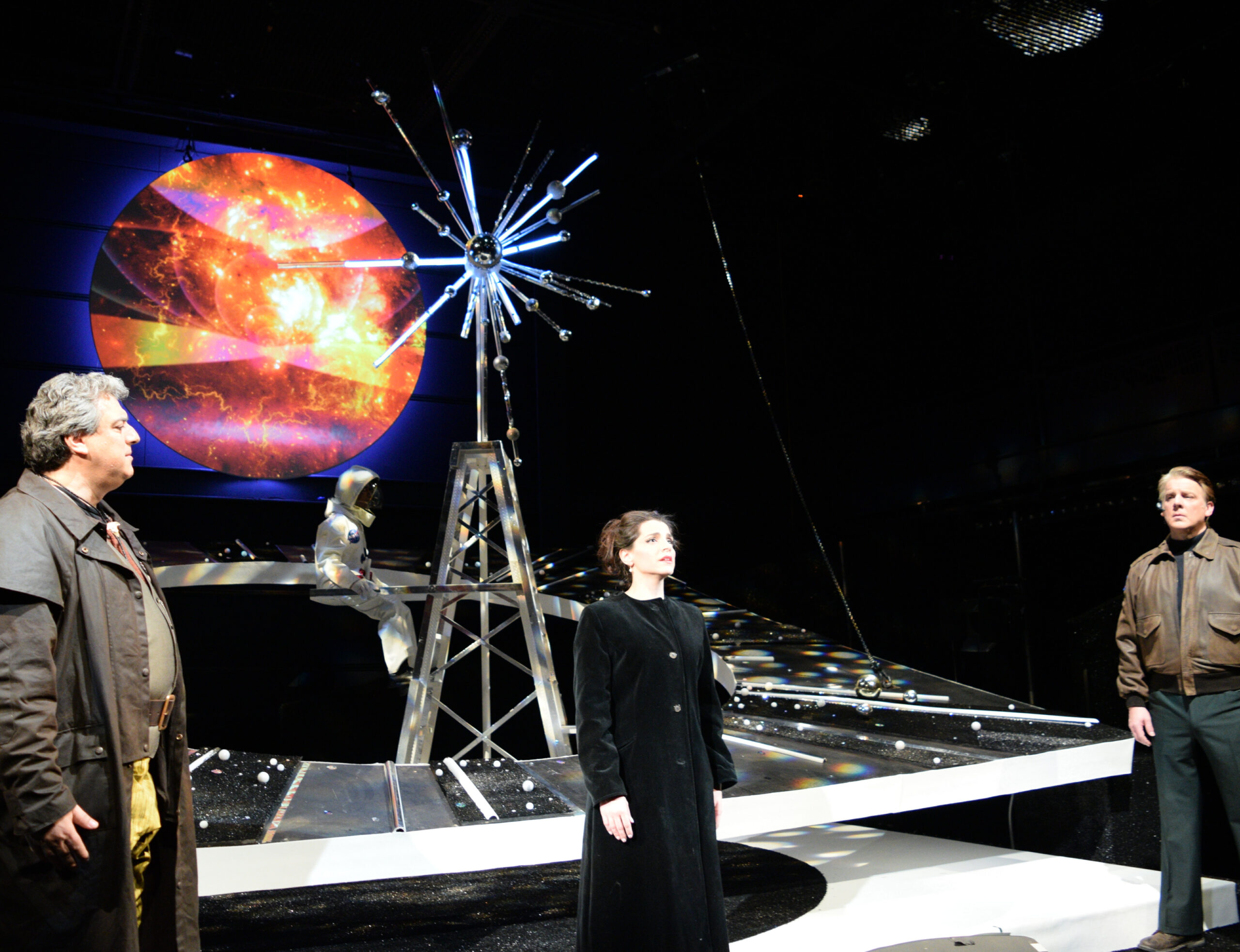 Brooklyn Academy of Music has brought crowds together since the mid-1800s.  While encouraging the development of new work, BAM also features speakers who discuss the work.  Astronaut Michael J. Massimino addressed the audience in 2016, during the January 28-31 run of The Astronaut’s Tale.  Tall and extraordinarily present in space, he spoke with Encompass Opera Producer Nancy Rhodes about his participation with the Hubble Telescope and other aspects of the space program.  Awarded by one of the actors dressed in an astronaut’s suit, it was great recognition of his life’s work.

I found Encompass New Opera Theatre tenacious in their mission to provide new opera for those so accustomed to having regular invitations to full productions and works-in-progress.  At a time like the present, when opera attendees are upset about time away from the best performance spaces, Encompass New Opera Theatre has found a way to connect and keep attendees engaged in conversation.  Having attended other showings at the BAM’s Fishman Space, located at 321 Ashland Place in Brooklyn, NY, I realized it was inspired viewing, right in time to get beyond the awful malaise of the Covid-19 crisis, and focus on a forum where we can again discuss the moments that matter, and the small steps and giant leaps that we witness throughout time. 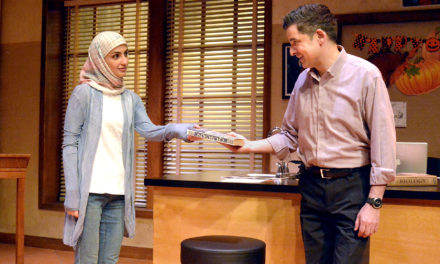 “Paradise” at Odyssey Theatre – STEM and The Teenage Brain