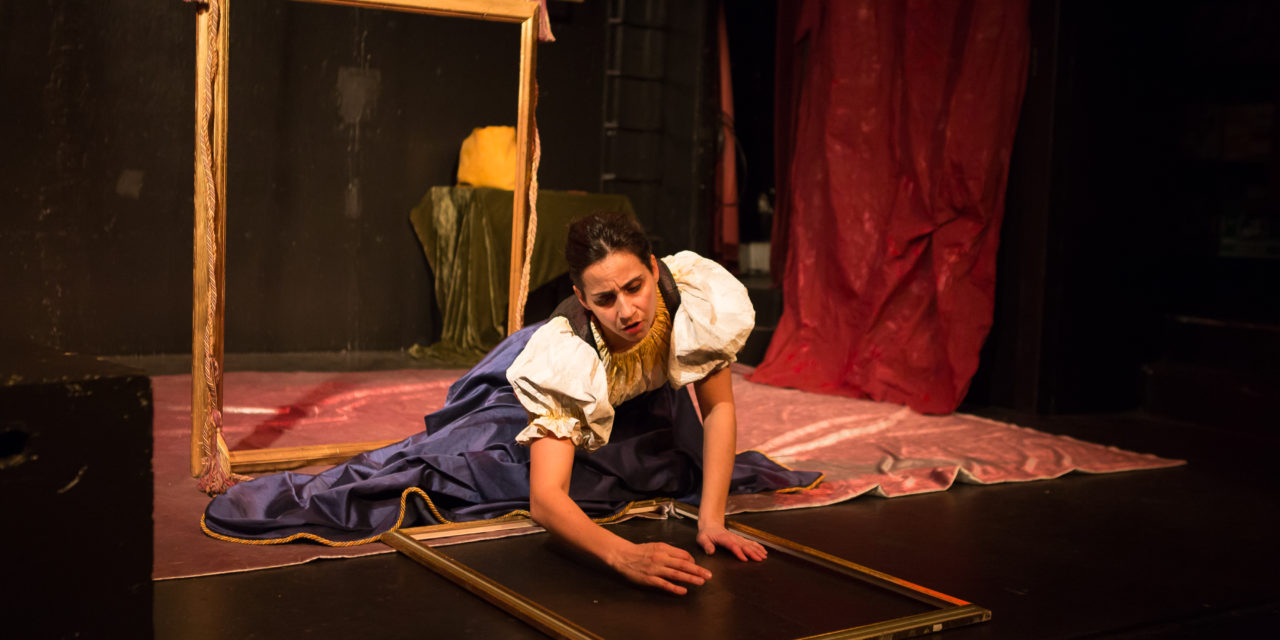 The Anthropologists reach deep into their own doctrine to discover the depth behind the classic Italian story of the feminist icon, Artemisia Gentileschi.

A Winner of Frigid Festival’s Best Solo Drama in 2018, Artemisia’s Intent is astonishingly thorough.  The Anthropologists charge forward with humor, intensity, and the madness of the moment.  “Basta” is chanted over and over, and we find that enough is enough.  It’s often troubling to see a pregnant Artemisia enduring the strains of studio disruption.  When we hear “Enough,” we find a clearer path for the next generation. 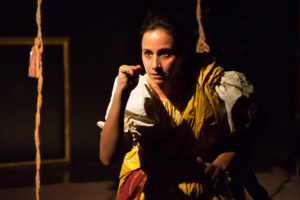 Mariah Freda proves to be a very capable lead actress.  Artemisia, herself, had a child and husband, after the awful trial that tainted her experience of Florence and her prized attendance at Accademia delle Arti di Designo.  Pregnant, reaches out to the audience, asking for the connection behind the rage of rape.  The name is mentioned–Agostino Tassi.  Her father, Orazio Gentileschi, battled for justice that is cannot be found.  For the modern theatergoers, it is a battle of the interior and exterior–a trial of image versus opportunity.  Though Ms. Gentileschi did testify against her attacker (and was later tortured for her truth), she somehow evinces as a unique figure, crashing through the era of the Baroque to make it all the way to the top.  Her rape trial challenged every possibility of an average climb to success.

When this historical figure becomes an art dealing, business maven, and it’s interesting to see in its entirety.  The seriousness of the Academy leaps into a post-groove era spin zone; this blend of contemporary and classical in a 60- minute drama points to a need in the theater makers to assert their own ambitious energy.  It’s such a joy to see Artemisia’s lessons for success when she proves that she can be a real market genius.  It’s a break-out moment in direct address, creating levity, beyond the precise, sculpted images brought to life for the purpose of painting. 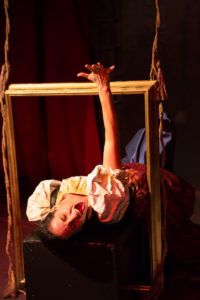 Throughout, the Anthropologists have gone through great lengths to analyze the paintings of Artemisia Gentileschi.  Particularly strong are the poses and postures of Ms. Freda.  Wearing the drapery of her hometown of Florence, she sends her arms through a framed painting, laying on her back, neck up, directly echoing the body positions in Judith Slaying Holofernes.  From chiaroscuro to teneroso, she creates images on stage to replicate the original forms found on the canvas. To look back 400 hundred years and find a mirror to which to respond can be alarming.

Jetting to the present, highlighting the cases of superstars like Clarence Thomas and Bill Cosby, we hear that while things change in the lives of women, other things remain remarkably the same.  The cross to bear, while enormous, is differently fatiguing.  Posing questions in front of the modern audience, Freda in Artemisia’s Intent is quick to inquire: is it the drink?  Where were you?  And, although some of it seems like a campus drill, it also speaks to a responsibility pattern as theater makers and audience members question their interpretation to complex issues surrounding us in the art world and the press.

Is Artemisia only a tough diva not to be silenced?  While Artemisia’s Intent seems to prove that there isn’t any room for escape, there is also the possibility of reaching beyond the gossip of the day and the anguish of the past.  At Horse Trade Theater on East 4th Street in New York, the play found a male and female audience, ranging in age, completely prepared to critique the next story.

“Casablanca:” We’ll Always Have the Radio!!!