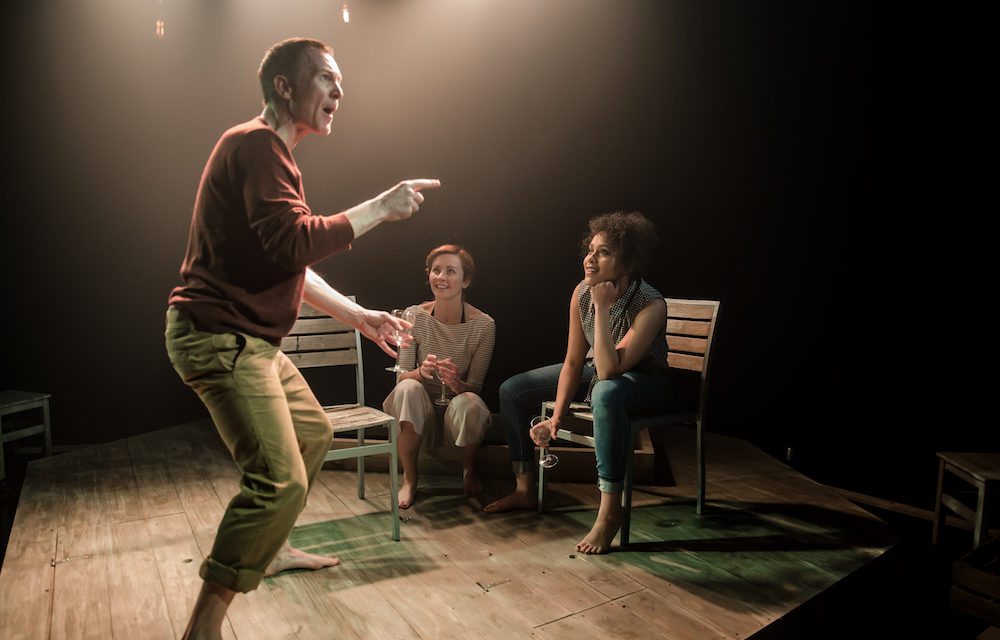 The marvelous is a dangerous place. Especially in memory. Today I still remember seeing the first production of Abi Morgan’s masterpiece Tiny Dynamite in October 2001, and ever since I have thought of it as one of the definitive moments of recent British new writing. Yes, in my memory the production—which was directed by Vicky Featherstone and performed by Frantic Assembly—was one of those shows which glows in the mind, a perfect blend of words, movement, and staging. But, in the cold light of now, is the piece as good as I think it is? A beautiful fringe revival says yes, it really, really, really is. It is still marvelous.

Two men, Lucien and Anthony, who have been friends since childhood go on a summer holiday. When they were six-year-old boys, a freak lightning strike hit Anthony in the chest and, although he survived, he’s a deeply troubled man who often sleeps rough. Lucien works as a risk assessor. He tries to look after Anthony, who is quite wired and hyper. On holiday, they meet Madeleine, and a love triangle develops which echoes a previous affair, one that ended in the woman’s suicide. It’s a tender and deeply felt situation. Thrillingly, in this superlative revival by David Loumgair, Lucien is played by a female actor, which adds extra emotional and sexual shading to this triangle.

The play asks whether Lucien and Anthony can break the cycle of repetition—and whether Madeleine can survive meeting these emotional lightning conductors. As the story blooms, its circular structure beautifully reflects the themes of repetition, risk, and recurrent loneliness. At one point, Madeleine says explicitly that she’s “never been so happy and never been so lonely in all my life.” This is a profound play which has a placid surface that barely conceals its strong undercurrents. Written with enormous elegance, Tiny Dynamite uses words like musical motifs—such as the “kapow” of a lightning strike—and an abundance of quirky humor. The mood of a summer break is lovingly conveyed, and the story puts us on the spot.

For this is all about those moments in life when, for whatever reason, you fail to do the right thing. And the guilt that silts up your emotions for years afterward. And the regrets that accumulate. And the sense of life being haunted by the past. Anthony is quite out of control, and Lucien has become frozen, unable to connect with any lover. Impotent. But, in Morgan’s hands, the story is also one about how sometimes second chances do come along, about how lightning can sometimes strike in the same place twice. This moment, however, requires the courage of a leap in the dark.

Although it was first staged soon after 9/11, this is Morgan’s most 1990s work, a piece that is as brilliant as Philip Ridley’s The Pitchfork Disney, Mark Ravenhill’s Shopping And Fucking, or David Harrower’s Knives In Hens. Like them, it’s a contemporary classic. And, like so many 1990s plays, Tiny Dynamite is in love with onstage storytelling, and the characters tell each other, as well as the audience, some beguiling little stories. About freakish accidents, and the piece is shot through with evocative metaphors, which often generate meanings and connections which are wordless but full of feeling. The tales of accidental deaths, such as the woman killed by a sandwich thrown off the Empire State Building, create an ambiance for how the characters experience their lives. Gradually, the narrative circles and circles until the tall tales are shoved aside by Anthony and Lucien’s real story, the story of their loss, of their lover’s death.

Morgan is here writing with an allusive subtlety and an emotional resonance that is simply inspiring. The dialogues are tight and emotionally true, while the storytelling shines brightly in the dark. A vein of dark humor gently pulsates; human connections are fingertip fragile; a deep sense of love wells up. Although Morgan’s writing for television and film is over-hyped and over-rated, she is here at her best, precise, imaginative, and verbally beautiful. The writing is stunningly good. Classic.

Loumgair’s superb production uses the tight space of this venue’s small stage to create a sense of claustrophobia that works well in this emotionally fraught story. Niall Bishop’s Anthony is often frighteningly intense, and when he strikes his chest the room shakes, while Eva-Jane Willis as his childhood friend explores both her character’s repressive coldness and her vulnerability. Tanya Fear’s Madeleine taps into the stillness at the heart of this triangle, her character being the outsider who gradually becomes a part of the others. Anna Reid’s design uses the motif of decking at this holiday location to good effect, and while the light bulbs above the playing space buzz quietly, Dan Jeffries’s soundscape evokes, for me, the electricity of Captain Beefheart, Kraftwerk and Tangerine Dream. A really lovely piece of theatre. Marvelous.

Tiny Dynamite is at the Old Red Lion Theatre until February. 3

This article originally appeared on Aleks Sierz on January 23, 2018, and has been reposted with permission.