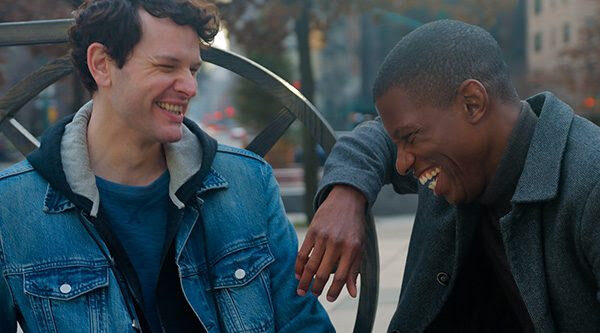 At TheaterWorks Hartford, Connecticut, This Bitter Earth, Harrison David Rivers’ drama of love, political commitment, self-discovery and loss, takes us back to the early years of the Black Lives Matter movement as both the catalyst and the ongoing context of a volatile relationship between an interracial gay couple.

A well-dressed black man stands alone on stage, confiding to us that he never learned to ride a bike because of his problem with balance. It’s as if, he says, he can feel the earth moving. The upshot: he would rather not think about gravity. This introduction to Jesse, played with just-right earnest self-awareness by Damian Thompson, sounds a decisive note. Jesse doesn’t want the world he lives in—the play is set very specifically between March 21, 2012, and December 15, 2015—to affect him in ways he can’t control. An aspiring playwright, he’s the talented son of a Baptist preacher who still sees his son’s gayness as misguided and not, like their blackness, a condition of existence. While Jesse is apt to see race as, like gravity, something you can choose to ignore. Until circumstances make you confront it.

Jesse’s lover Neil (Tom Holcomb) is white and even more earnest. He became, almost by accident, an activist in the Black Lives Matter movement. Offstage is the succession of killings of black men from the death of Trayvon Martin in Florida, 2012, to the marches in honor of Jamar Clark in Minneapolis late in 2015, which resulted in assaults by armed white men on the protestors, and including the protests in Ferguson, Missouri after the killing of Michael Brown. The play’s main tension—Neil trying to radicalize Jesse—are interleaved with exchanges in which the couple copes with typical couple issues: meeting the parents, accounting for tastes and wildly different backgrounds (Neil’s parents are rich and liberal), and having an actual physical fight over infidelity. As an instance of a gay romance play, This Bitter Earth shows love as endearing, tender, mundane and exasperating, and Rivers has a way with dialogue that can be by turns candid or arch or noncommittal or probing.

And it’s almost wholly a play of dialogue, though with definite opportunities to take advantage of the pleasures of two attractive men and a bed. Riw Rakkulchon’s set is handsome, stylish in a lived-in way, with a clutter of artefacts of the characters’ lives, and that bed is set up on a riser as a kind of stage within the stage. There are also three different portals that allow for the many entrances and exits that work as temporal cuts between the play’s quick vignettes. Director David Mendizábal, who directed the play before back in 2018, knows how to work the script’s rhythms, staging scenes with enough variety of movement to keep us engaged visually as well as aurally, helped by Frederick Kennedy’s always canny sound design. The costume changes help as well, though the costumes by Devario D. Simmons may favor T-shirts for Neil with a few too many logos.

This Bitter Earth is another good choice of an intimate, well-scripted play for TheaterWorks by Artistic Director Rob Ruggiero, letting audiences experience a meaningful take on the issues of our day as filtered through dramatic situations. Rather than dramatize how the personal is political, which would be the case if this were a play about gay activism, Rivers makes the political personal as he orchestrates recurring references to the unfolding urgency of Black Lives Matter in the lives of these two men. The hopscotch of flashpoints can seem a bit overdetermined, as a means of telling time and of keeping the tension in the relationship on a constant smolder, but it helps us to weigh what is really at stake in Jesse’s gradually altered consciousness. It’s possible now to see the entire play as a prelude to the political forces mobilized with the killing of George Floyd in May 2020.

The quick-cut approach of Rivers’ script hinges on the theatrical staple of replaying a key scene until we get to see it all. The script’s jump-cuts in time keep us a bit off-guard and can feel contrived simply for effect. The strategy pays off though, in terms of the kind of ultimate dramatic emphasis that takes us, in the end, to where we began, letting the affection we’ve come to feel for these characters tear at us for what happens to them. Without giving away the loss at the heart of the play, I can say that the play’s ending has a force all too rare in most drama: it makes you want to watch it all over again, to revisit all we’ll ever know about this couple whose love, in all its trials and errors, was a strongly positive force in a world growing steadily uglier and more dangerous.