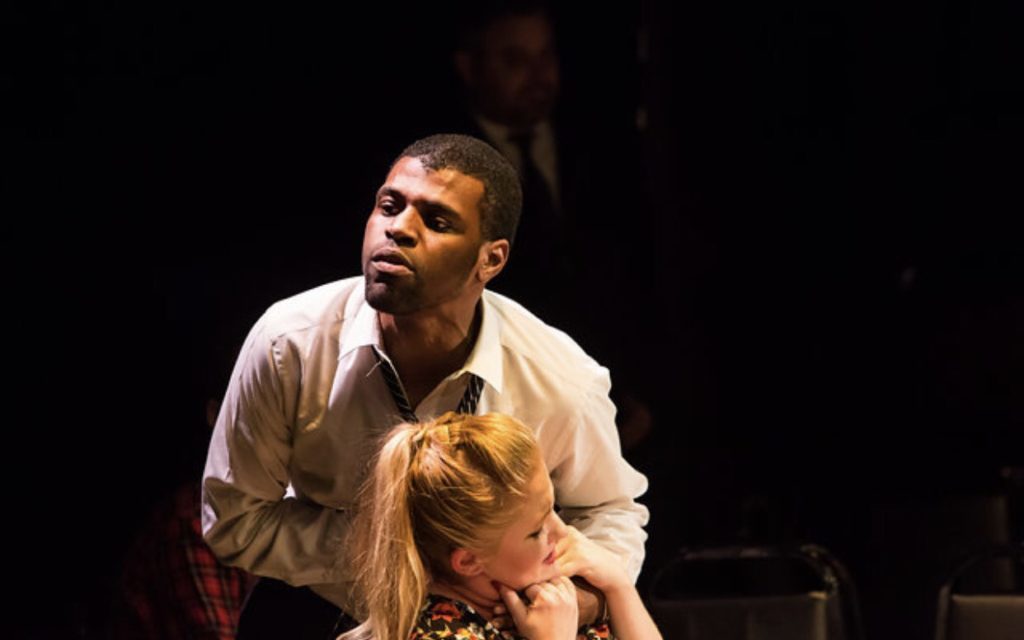 One of New York City’s most dynamic young theater companies makes a bold addition to its repertoire with its engaging production of Dutchman, Amiri Baraka’s provocative chamber drama.

Dutchman is a companion piece to Albee’s The Zoo Story, another mid-1960’s urban-set dialogue between two strangers featuring a tragic ending. In this case, a Central Park bench is switched out for an MTA subway car. Where Albee’s characters are both white males, Baraka’s play features an African-American man and a white woman. A play so clearly aligned with the turbulent Civil Rights era requires contextural reconsideration; that’s precisely what this latest production has to offer.

Long Island City’s cozy, welcoming Secret Theater offers up an inspired approach to Baraka’s best-known play by staging it as an immersive production. From the young male actor chatting about subways in the slender lobby to the guitar-strumming buskers and asphalt evangelists singing and chanting as the audience enters the auditorium, Dutchman begins before the audience sets eyes on the stage. The result is an enchanting evening presented in the round with the abundant benefits and modest limitations such a setting entails.

Scenic designer Brian Pacelli sets the center of the auditorium with black chairs arranged like subway car seats, underneath a sleek fluorescent light framed by two black poles, evoking an MTA car. The floor is covered with full-color newspapers in an intriguing approximation of vinyl flooring. Several people stand on risers where seats would traditionally be placed, resembling commuters waiting on a subway platform. The overall effect is both captivating and disorienting. It’s unclear not only where to sit to garner a good view but whether someone is an audience or cast member.

While Walker is outfitted in a comfortably-tailored dark suit, white shirt, and rep tie, Smith is saddled with an excessively skimpy short set in a multi-colored geometric pattern. More realistic would have been a short sleeve blouse paired with a short skirt.

Smith comes on at too high a setting, only minutes later dropping down into a more authentic emotional core. By overemphasizing her character’s sexuality she does not offer Walker as much to work with as he needs. She is at her best when the conflict between them is at its peak and they are engaged in carnal battle.

The evening’s highlights are those moments when Clay and Lula are locked in verbal combat, working off each other with a palpable emotional charge. The actors have moments of high conflict which toggle between sensual flirting, flip dismissals by Smith, and rage by an exasperated Walker. It is he who stays rooted throughout and is key to grounding the evening in the high stakes essential to the audience sustaining a deep connection to the action.

The excessive use of the word “jew” in Dutchman renders it impossible to ignore Baraka’s own lamentable antisemitic biography. His distinctive insight into race relations and sexual politics is what renders the play worthy of revival, not his personal prejudices. Several references to Jews could’ve been excised; they add nothing to the plot or characterizations of an otherwise essential work of 1960s theatre. Instead, they are jarring and noncontextual, pulling the audience out of the action and towards the playwright.

Several supporting actors effectively open up the play and the playing area, making the experience more cinematic than a two-hander would otherwise seem to indicate. Lenny Thomas is potent in the role of the Young Negro at the end of the play. His earthy naturalism seems to help root Smith and makes their scene a memorable coda to the story of Clay and Lula. We’re left wanting this final scene to continue, despite a dreaded sense of déjà vu.

The Secret Theater deserves credit for its imaginative reinvention of Baraka’s period piece, helping reconfigure it for a new generation of theatergoers hungry for relatable theatrical transcendence. Their production deserves a return engagement and a lengthier run.