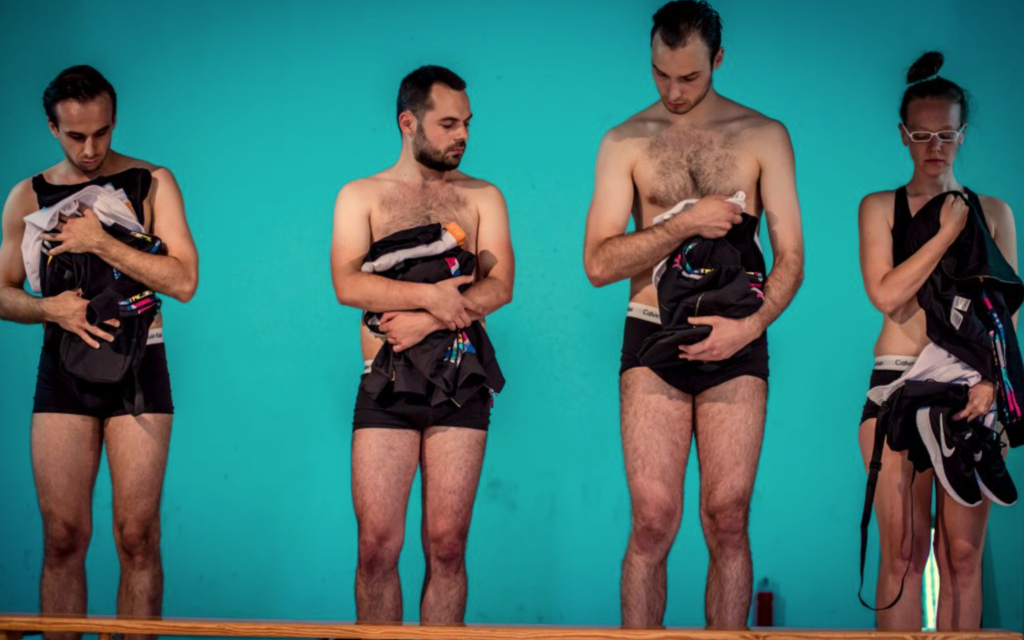 War and revolution are two terms almost interchangeable. They appeared in the titles of the double bill on the inaugural night of the 2018 edition of the Bâtard Festival at Beursschouwburg, which took place on October 30. With no hierarchy suggested, the programming flexibly allowed the audience to start their evening with either Cezary Goes To War by director Cezary Tomaszewksi (Poland), or Tell Me About The Revolution by artist Farbod Fathinejadfard (Belgium). Both are totally different in moods, but they set out for the same thing: politics. 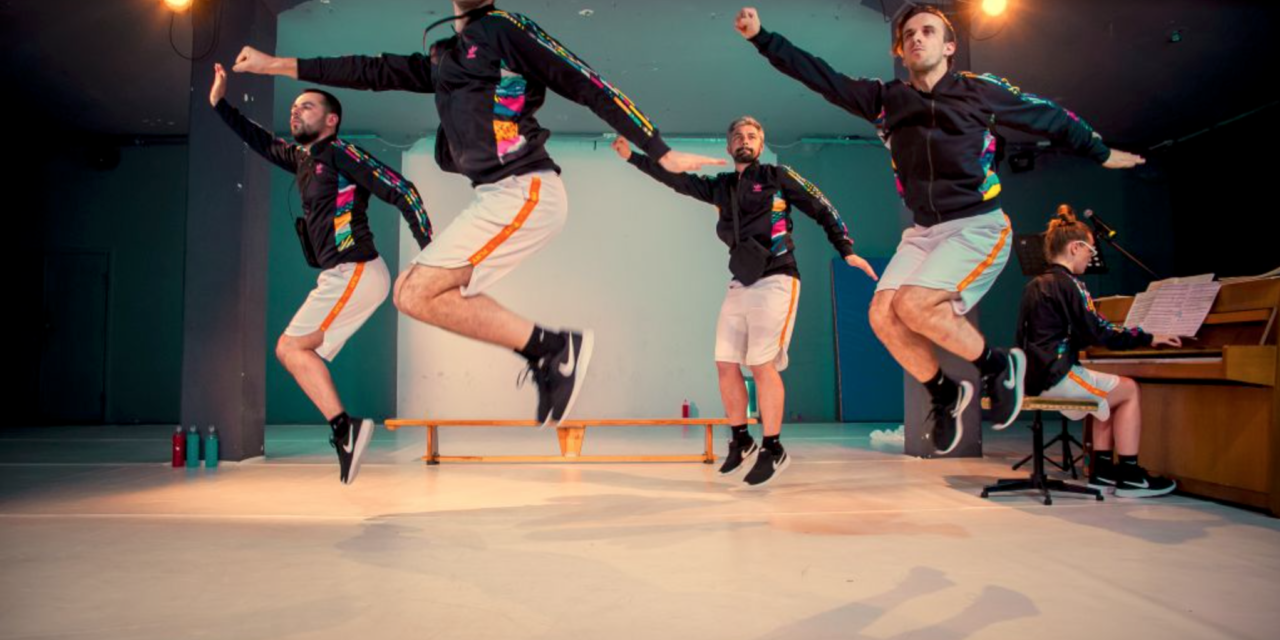 Tomaszewski mobilized camp aesthetics to queer, according to the director, “toxic male heteronormative identity” most inherent, as far as Tomaszewski’s musical was concerned, in the military life and the patriotic Polish folk songs of the nineteenth-century Polish composer Stanislaw Moniuszko. Highly reminiscent of memory plays like Tom Stoppard’s Travesties or Peter Schaffer’s Amadeus where wish fulfillment of the main character is projected onto the stage, Cezary Goes To War projected the military life Tomaszewski missed when, turning 18, he failed to get conscripted into the army due to the medical records he had accumulated and presented to the army, like most boys in Poland at that time, in the hope of escaping the conscription.

Written for four actors and one pianist, Cezary exteriorized different stages of the director’s own identities at the age of 10, 20, 30, 40 while the sharp-clawed female pianist represented his feminine side and musical giftedness. Looking back as a gay man, coming through without being conscripted was such a missed opportunity! So went the flamboyant queer choreography of men’s dressing room fantasy. Here Nijinsky’s Afternoon Of The Faun against the backdrop of Debussy’s Prelude To The Afternoon Of A Faun was appropriated to tell a story of his alter ego masturbating under a white towel which was then tossed around by his different selves in the sweaty changing room—a rampant transposition of queer desire into a space of heteronormative national imaginary: the military camp. Although it was arguably possible to locate where Tomaszewski’s fantasy world took place with the help of spatial markers such as a photographic portrait of a soldier which was carried in and out at different scenes, the storyline was deliberately kept fluid, against the rigid form of the musical compositions rendered by the pianist as part of the queer aesthetics.

Where Tomaszewski’s queering aesthetics hit the highest note was perhaps when camp choreography of aerobic exercises in shiny gym fetish worn uniformly by all five characters violently and comically clashed with Moniuszko’s songs of high conservatism. Moniuszko’s patriotic and misogynist lyrics drew on Polish Romantic poet Adam Mickiewicz’s texts whose English translation appeared in real time in a text box on the backdrop of the stage. At different turns of a refrain of an unmistakable nationalist character, the tallest character would take his shirt off and flaunt his sporadically hairy chest before putting it back on, waiting for another turn of the refrain to come and then repeat this mock machismo. 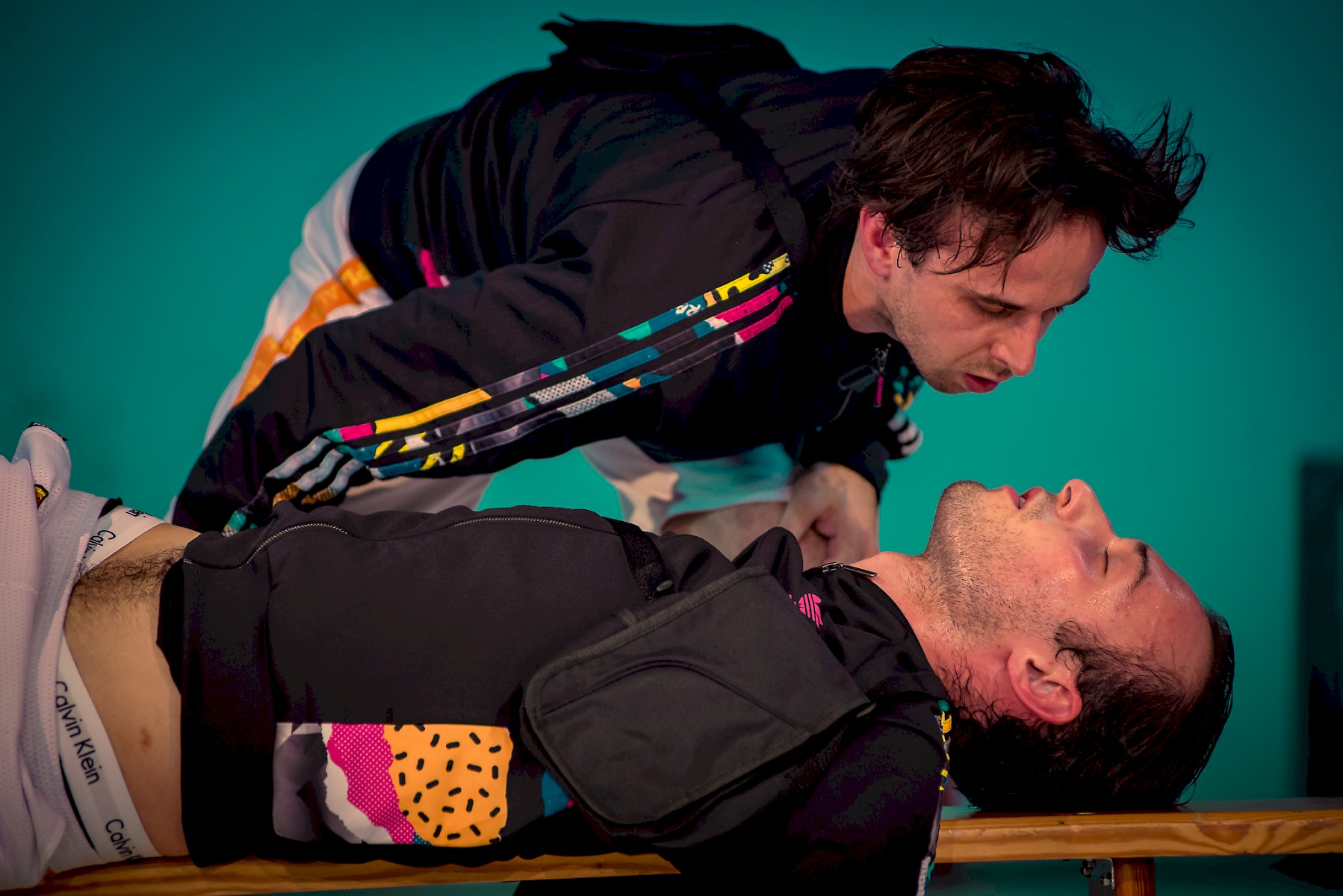 In Cezary, right-wing politics was called into question. Not selected to join the army in his teens, now in his 40s, Tomaszewski has asked himself how he can be useful to his own country. “But what is useful? Wars are stupid and futile,” he remarked. What is obvious though is, through Cezary, Tomaszewski is adamant that queering is also a way of making a revolution.

Tell Me About The Revolution by Farbod Fathinejadfard 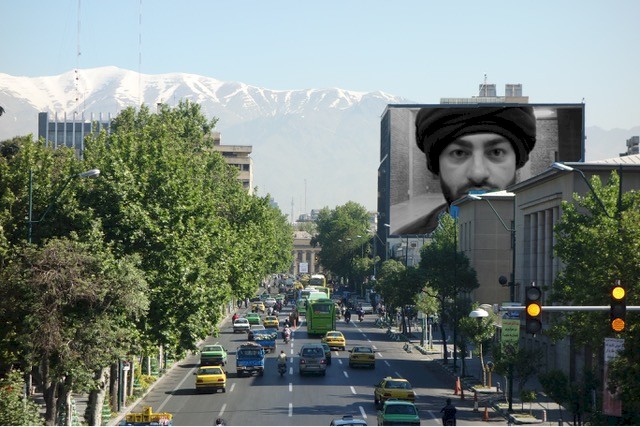 While Cezary Goes To War by mobilizing queer politics against heteronormative subject position embedded in the “nation” as a construct, Tell Me About The Revolution, a soloist performance by Farbod Fathinejadfard, critiqued right-wing politics from an ethnic point of view.

Starting off, possibly also as a “memory” piece, spectators saw Fathinejadfard in a security guard uniform, turning on the light of the projector and set off a recorded conversation between three family members in Farsi. English translation ran on the projector. The son, named “Farbod”, insistently urged his mother to tell him about the 1979 revolution that gave birth to the Islamic Republic of Iran: “Mom, tell me about the revolution.” “The mother kept evading the subject and averting the son’s attention to “Mars”—a Western confectionary brand. While she insisted on her domestic role by keeping politics at bay, the father felt entitled to give his assessment of what happened in the Iranian public life: “Shah is leaving”; “we will have democracy” and that is a “good day.” Under Khomeini, we will have freedom of speech and freedom of religion, said the father. These are interesting remarks, especially considering the fact that after the revolution, a rapidly modernizing and capitalist economy, attributed to the West, was replaced by a populist and Islamic economy and culture. The father in this dialogue emitted an ardent belief in Western-styled democracy and the ensuing freedoms derived from European Enlightenment thought. Yet these European Enlightenment values underlying the notion of the nation was set to be challenged in the final part of Fathinejadfard’s solo performance.

Identities much more quickly shifted in the second part. The security guard who projected his memory of a family conversation supposedly back in Iran, in the beginning, peeled himself off layer by layer and started a fascinating ritual of performativity in and out of different Muslim identities and social statuses. From a security guard, a businessman, a sportsman, a fashion hybrid who embraces both Middle Eastern top and Western shorts to a naked body whose male genitals then became wrapped in red lace panties. The body then became clad with brassiere and a hijab and, in no time, was completely cloaked with a big piece of black cloth which Fathinejadfard adroitly folded in and out, up and down, in such an admirably complex and sophisticated way, to form a long black gown — the visual with which we associate women from the Middle Eastern cultures.

Fathinejadfard’s attempt to denaturalize different Muslim identities through the visual transposition of Judith Butler’s theory of performativity in the second part was augmented by his semiotic probe into the, more often than not, the essence of such identities through culturally specific signs. In this part of the performance, the hijab and the long black gown as signs indexing a “Muslim woman” were extended to include the Arabic language as another set of signs interpreted as pertaining to a Muslim identity. The artist’s male body which was now performing, under the long black gown, a female gender role started to inscribe a series of white Arabic calligraphy onto the black floor, installing himself/herself/itself at the centre and gyrating with a long-stemmed brush to, eventually, form a fantastic full circle of a text-based (as opposed to image) visual treat. The calligraphy turned the performing space which used to be neutral into a location of a specific culture. It was so powerful and dominating that it risked diluting all the artist’s earlier attempts to deconstruct the notion of identity as merely a series of performative acts.

The last part of Fathinejadfard’s performance saw him reading out, from a multi-page form in his hand, a series of questions one would encounter, and be required to fill in, as an immigrant or a refugee, upon entering Belgium: “Why are you making this trip?”, “Why did you leave Iran?”, “Do you want to go back to Iran?”, “Can you provide proof of economic integration?”, “Do you work?”, “Why don’t you work in a factory?”, “How does our economic model work?”, “Do we need to pay for your stay?” But after a while, official inquiries gave way to something more personal and offensive—the questions any immigrant, refugee or even some non-white citizens would immediately recognize: “Where are you from? No, no, where are you from?”, “Are you Belgian?”, “Why do you speak so loud?”, “Do you practice polygamy?”, “Is Santa Clause racist?”, “Waarom spreek jij zo luid?”, “Why are you apologizing?”, “Is that your backpack?”, “Can we open it?”, “What’s your problem with me?”

Here, the Enlightenment values underpinning the freedom of speech and the freedom of religion were put to the test. The artist’s well-gleaned questions uncannily reveal a paradox of exclusion identifiable in the colonial discourse which, obviously, as Fathinejadfard’s performance reveals, still haunts the present. The non-white, non-European, these questions made clear, are exempted from the Enlightenment values and the rights and freedoms derived from them. At the moment when the train of these endless questions gained its momentum, something extraordinary took place. The audience, predominantly white, started to feel they were being interrogated themselves. This was how Fathinejadfard has fought his wars as an Iranian in Belgium. Here, the revolution was figured as the reversal of roles—a distribution of the other’s social position—a moment where the audience was made to accidentally slip their feet into the shoes of an Iranian artist who, “[i]n 2018…might be granted Belgian citizenship. Maybe.”

This article was originally published in Etcetera on November 6, 2018, and has published with permission.