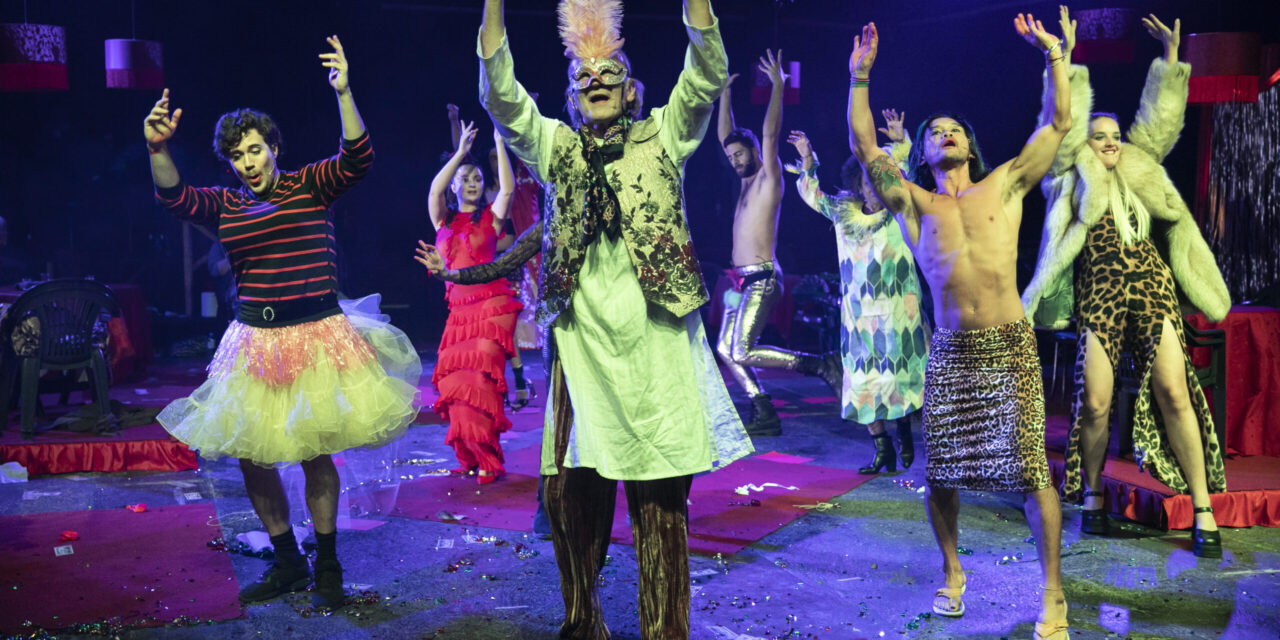 Balkan Bordello: An Orgiastic Musical in the Aftermath of War

Imagine yourself at a hedonistic nightclub full of campy decorations, cheap furniture and guests that drown themselves in shots of rakia. Now imagine that bloodshed is happening everywhere around you, caused by unhealed traumas and unresolved conflicts of the just-finished war. Imagine that even in these morbid circumstances you’ll be drawn by turbo-folk music to participate in orgiastic dances. Welcome to the world of Balkan Bordello.

This flamboyantly dark anti-war show isn’t just rich in story and style, but also in the production’s prehistory. Jeton Neziraj’s play has been directed twice before: once by Stevan Bodroža at the National Theatre of Montenegro in 2015, and András Urbán at the National Theatre of Kosovo in 2017. Both are prominent regional directors, but Urbán’s unapologetic and provocative way of making political theatre alongside Neziraj’s critique of a post-war society might be the reason why the second show was greeted with protests and violent threats from Kosovo war veterans.

However, this third directorial iteration by Blerta Neziraj takes place in a slightly different political environment. Albin Kurti, the Prime Minister of Kosovo who unlike his predecessors doesn’t look back nostalgically at the war of the 1990s, attended the premiere. He did not appear provoked, rather relaxed enough to scroll on his cell phone during the performance, and not because he was composing an angry tweet because of the show.

This production can also be seen as a milestone in artistic collaboration with Serbia that still doesn’t recognize Kosovo as an independent country since the show is a co-production of Qendra Multimedia with Atelje 212, an institutional theatre from Belgrade, and also with LaMama theatre and the My Balkans organization from New York.

Though the show feels very contemporary, the basis of its story is as classical as it can be – it’s a rewriting of Aeschylus’ Oresteia trilogy, and quite a faithful one. Jeton Neziraj has kept all the major plot points, focusing his adaptation on the contemporary world. The first big alteration is the setting, so the story takes place at a decadent but dismal and run-over-by-time Balkan Express Motel, and the second big change is the modernization of characters. Agamemnon is now a victorious military commander and war criminal with implicit but clear reference to the Kosovo war, while his wife Clytemnestra is the owner of the Motel who’s ready to kill her husband in order to stop him from abusing her anymore. There’s also a queer streak that runs through the production: Orestes and Pylades are now a queer couple. Jeton Neziraj’s plot is satirical and the irony is only intensified by Blerta Neziraj’s directing, which ensures that all elements of the show work towards this goal. The production’s musical elements, its energetic electro-oriental sounds composed by Gabriele Marangoni, form suitable background to the play’s songs about the seduction and absurdity of war.

The satire is also mirrored in Gjergj Prevazi’s choreography. On one hand, the characters meet the returning commander with almost ceremonial movements and the fighter, played by Ivan Mihajlović, performs an agile celebratory dance to his speech. On the other hand, there are often collective scenes of drunken dances with erotic elements, both homosexual and
heterosexual. There’s also Pylades, played by John Gutierrez as a choreographer from Berlin, fascinated by the locals’ ‘barbarism’; he wants to humanize them through dance – a clear critique of the West’s hypocritical and cosmetic altruism. Pylades also teaches other characters basic dance steps at the most awkward times, for example after the murders that happen at the Motel.

A thick layer of irony and campness might be the show’s biggest protection from total nihilism. Even though the story is full of violent male characters, their traditional image of masculinity is subverted by their queerness. Not only is Orestes openly gay as an avenger of his father’s honor, but so it seems is Agamemnon’s fighter whose image of homophobia and aggressive masculinity cracks during a drunken interaction with Pylades.

Agamemnon’s image of masculinity seems sincere until the end, but he’s the first one who gets killed almost at the beginning of the performance. The show feels to a certain extent like a post-gender society in which the characters are judged on their deeds and not so much on sexual or gender identity. This would explain the lavish, glittery and colorful scenography (Marija Kalabić) and costumes (Gabriel Berry) that are assigned to almost all characters. With actors coming from New York, Kosovo and Serbia, there was a risk of incoherence because of different acting styles, but it seems that’s avoided. All actors adopted a grandiose, over-the-top approach that fitted very well into the concept of the show. George Drance as Agamemnon has a firm posture and elevated, formal manure of speech, only for this illusion of nobility to be scattered by his periodic outburst of anger and violence and Verona Koxha’s frantic performance of Cassandra who’s a traumatized victim of Agamemnon and the war. Svetozar Cvetković’s exaggerated and loud gestures present him as a pretentious poet who deludedly believes that he and his fellow intellectuals are the founders of the new state and not the warlords. Cvetković’s expressiveness only really comes into action in the second half of the performance, but this is an issue with the whole show. It feels like it’s not polished enough and that everyone would benefit from a week or two of more rehearsals. There are issues with sound; it is sometimes a struggles to hear all the words, and some actors are heavily dependant on microphones while others are not.

But the life of Balkan Bordello has just begun. The New York premiere is scheduled for April next year and it’s almost certain that the cast and the whole show will come to function much more efficiently in the weeks and months ahead.

This article was originally published by Kosovo Theatre Reviews on November 11, 2021, and has been reposted with permission. To read the original article, click here.