In a memorable production, Xameleon Theatre recently brought Mikhail Bulgakov’s complex novel A Dog’s Heart to the stage at Canada Water Theatre. Performed in its original language with English subtitles, the play was aimed at Russian and English speakers alike, bringing a piece of Russian culture to a London audience. Based in Canada Water Library, the theatre only seats 150 guests, but nevertheless, the entrance to the building was framed by a long queue of curious theatre-goers.

The setup of the stage reminded of a hospital room, as two white room-dividers blocked the view on what lay behind. The lights went off and, projected onto the room-divider, we saw snow-covered Moscow, a storm blowing through the city. Then, from the right, appeared Sharik, the stray mongrel, embodied by Russian actor Sergey Kotukh. In a heart-warming monologue, Sharik described his suffering as his left side had just been scalded by a cook shooing the stray away from the dustbins. Seeking shelter in a doorway, the dog was certain of his imminent death, when a man (“not a comrade, but a citizen, or even more likely, a gentleman”) appeared on the screen. Wearing a heavy fur coat and longish beard, he offered Sharik a sausage, with which he lured the creature along the screen into his house.

In order to treat the audience to a “dog’s perspective,” director Konstantin Kamensky cleverly used the on-stage room-dividers and a live camera filming from a low angle. The actors interacted with the camera, bowing down to talk to, stroke, and feed the dog (in this case the cameraman was fed with real food off a dining table filled with zakuski, Russian snacks). Sharik, meanwhile, sat next to a screen on which the spectators could observe the play through the camera lens, representing the dog’s eyes. 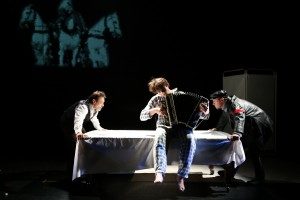 Early-20th-century costumes, an old-style heavy dining table with an antique phonograph and a dusty owl sitting on a chairback completed the rounded visual make-up of the performance–not to forget the incredible attention to detail the director put into his production. Zina, the maid, dressed the table with beautiful silver tableware and real food was served for the protagonists to eat.

The level of detail followed Bulgakov’s meticulous descriptions of his characters’ lifestyle in the early years of the Soviet Union. In A Dog’s Heart, the writer points the finger at a flawed social-economic system driven by personal political ambitions, and ideological misconceptions.

Clinging on to his inherited privileges, Professor Phillip Phillipovich Preobrazhensky occupies seven rooms in an apartment block now managed by a proletarian house committee. Oleg Sidorchik brilliantly embodied the personality of the professor. He beautifully expressed the character’s frustrations with a new world order trying to destroy every aspect of life and work. We were set to have empathy with the man plagued by the impertinence and incompetence of new leaders, who struggle to keep the house in order and are ignorant towards the professor’s work.

A renowned medical doctor and scientist, Phillip Phillipovich’s on a quest to finding a rejuvenation remedy to ease his wealthy patients’ misery of aging. Sharik’s a means to an end and as soon as the stray has recovered from his injury is placed on an operating table. Drawing on his own experience as a war surgeon during WWI, Bulgakov describes in great detail the procedure of implanting human testicles and pituitary glands into the dog. Capturing the gravity of this transformational moment on stage, the audience was struck by the heavy sounds of Wagner’s Tannhäuser as the room-divider closed to block the view on the operation table. It’s not a coincidence that Bulgakov chose Tannhäuser to be Philip Philipovich’s favorite opera: undoubtedly, it offers one of the most acclaimed musical descriptions of the complex and inevitable relationship between the spirit and the flesh. 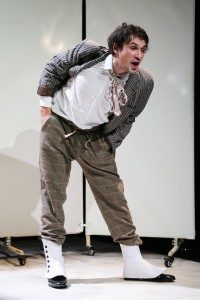 And so, a hybrid creature that walks on two legs emerges from the operation and soon begins to recite communist slogans. The likable mongrel Sharik becomes comrade Polygraph Polygraphovich Sharikov, a drunkard who harasses women and has a tendency to steal. Sharikov is Bulgakov’s provocative critique of the idea of creating a New Soviet Man. Despite his lack of manners and education, he rises through the ranks of proletarian order capable of menacing his former master. The creature has become its creator’s nightmare!

A Dog’s Heart is a brutal allegory for the Communist belief that it has found a recipe to “improve man.” Replacing the Bible with the Communist Manifesto, people become blind towards any kind of divine or natural order and convinced that man holds the ultimate power to mold human nature and create a new world. But Sharik’s fate also reminds us that, when challenging nature, man challenges his own very existence.

“The whole horror of the situation is that Sharik now has a human heart, not a dog’s heart. And about the rottenest heart in all creation!”

And so, it’s decided that comrade Sharikov be retransformed into his natural state–that of a dog. And despite the pain and confusion, he’s had to endure, Sharik’s faithful to the professor and grateful for the warmth and food he receives from his master…

This article appeared in Ceel on December 10, 2018, and has been reposted with permission. 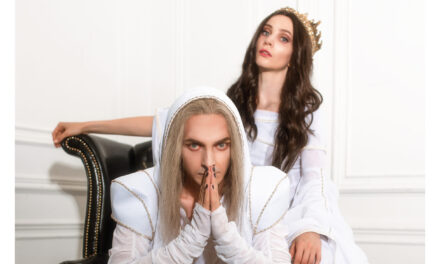