Shakespeare, Sinatra, And The Philosophy Of Aging

Aging in the world of entertainment is portrayed in a variety of ways. In some cases it’s graceful and elegant; in others, it’s manic and doddering. Shakespeare has dealt with this subject numerous times with vast reinterpretations in productions through the centuries. In this excerpt from Aging Thoughtfully: Conversations about Retirement, Wrinkles, Romance, and Regret, authors Martha C. Nussbaum and Saul Levmore look at the classic example of King Lear, and how different portrayals of this elderly character can be a reflection of how people see aging and infirmity in modern times.

Productions of King Lear these days are obsessively concerned with the theme of aging. Just as the postwar period saw an emphasis on empti­ness, loss of meaning, and utter devastation (in Peter Brook’s memorable production starring Paul Scofield, but also in countless others after that), so in our time it is the age theme that has become popular, and that may even account in part for the play’s recent surge in popularity. Productions follow the preoccupations of their intended audience. Today, many or even most audience members for a Shakespeare production are personally anxious about aging, are currently caring for an aging relative, or both. We should mention also the legions of long-lived excellent actors who want to play the role and are not deterred by its extreme physical demands. Laurence Olivier (76 when he played the role), Ian McKellen (68), Stacy Keach (68), Christopher Plummer (72), Sam Waterston (71), John Lithgow (69), Frank Langella (76), Derek Jacobi (72), and, most recently, Glenda Jackson (80). We are clearly a long way from Shakespeare’s own Lear, Richard Burbage, who played the role at 39, and further yet from Gielgud, at 29. (Scofield, by the way, was only 40, but it didn’t matter, because that production did not emphasize aging.)

A masterpiece yields new insights when produced with a new empha­sis, and Lear is no exception. So I do not criticize directors for choosing to emphasize the theme of aging. And the play, in which Lear asks for expres­sions of love and then divides his kingdom between the two daughters (Goneril and Regan) who fawn on him and disinherits the one (Cordelia) who really loves him, investigates themes of dispossession, loss, and even­tual madness that Shakespeare does connect clearly with Lear’s advancing age. Still, there is something amiss with one common way this emphasis is realized: some directorial choices lead us away from the insights about aging that the play actually offers. Let’s start with a representative example. 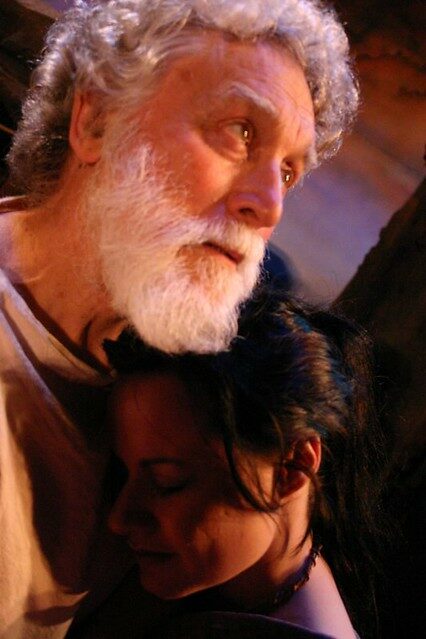 A much-lauded Chicago production of King Lear in 2014 begins like this. Actor Larry Yando, playing the king in a vaguely modern setting, as an aging tycoon in his elegant bedroom suite, wearing a high-end dress­ing gown, tries out some Frank Sinatra songs on his fancy stereo. With the petulance of a child throwing away boring toys, he rejects “That’s Life,” “My Way,” and “Witchcraft”— each time smashing a plastic remote in frustration and getting another from the attentive servants who surround him. (The repeated gratuitous destruction sounds a false note: tycoons — unlike hereditary monarchs— get where they are by not being wasteful, and he could so easily change the band without smashing the remote.) Finally, he arrives at “I’ve Got the World on a String.” Satisfied, he dances around delightedly, partnering only himself, but with great agility. As Chicago Tribune critic Chris Jones notes, this is “a cheap choice because those who actually need to believe they have the world on a string, like Lear, so rarely expose themselves with so obvious a lyrical preference.” But Lear is happy, and aside from certain manic anxiety in his whole demeanor, shows no signs of aging. Apart from the heavy-handed choice of songs, it’s a riveting performance of an unloving, captious man, aging but still, very fit, wrapped up in his own power, used to having his own way with everything and everyone.

Just a few moments later, however, Lear has difficulty remembering the names of his sons-in-law — and as he searches for the words that won’t come, there’s a look of terror on his face, as the devastation of incipient dementia reveals itself. It’s a stunning moment. But is it a convincing interpretation of the play? Director Barbara Gaines informs us in the pro­gram that Lear is about all of us who either are aging ourselves or have an aging relative— or both. In act 4, scene 7, Lear indeed describes himself as “four scores and upward,” thus pinpointing the age rather precisely. Yando, however, told the Chicago Sun-Times that he is playing Lear “as my age, not 80.” Yando is currently fifty-eight. So apparently what we are seeing is extremely early-onset dementia. (This fits badly with the way Yando moves in later acts, with the shuffle of a very old man, but never mind— right now I’m just talking about the first act.) So: is Lear plausibly or revealingly staged as about early-onset dementia?

It has become almost a cliché to do what Gaines and Yando do, writing the decline and the mental frailty into the play’s very opening. In fact, the device of forgetting the names was already used by Plummer, although I don’t know whether he invented it. Indeed R. A. Foakes, editor of the Arden edition of the play, finds that senior decline, inserted into the play’s very opening, is a hallmark of productions in the 1990s: Lear is likely to appear as “an increasingly pathetic senior citizen trapped in a violent and hostile environment.” The popularity of the aging theme, so emphasized, has led to a glut of productions of the play, as audiences, more than a bit narcissistic, like to focus on their own future, near or far. Los Angeles Times critic Charles McNulty, in an eloquent article, doubts the wisdom of this whole trend, which he plausibly attributes to the graying of the baby boomers. He declares that it may be time for a moratorium on attempts to stage the play at all.

So what’s wrong with Yando’s memory lapse? One obvious problem is that it is not in the text at all. It is not until he is out on the heath that Lear shows mental imbalance, and even then, it’s some sort of “madness,” but it surely doesn’t fit the all-too-familiar cliché of Alzheimer’s disease, given his verbal eloquence and his insights into the nature of human beings and their world. Indeed, a more pertinent criticism of Gaines— for of course directors can and should insert things not directly in the text if they illuminate the work— putting Lear into the box of Alzheimer’s from the start makes it pretty hard to relate the Lear of the opening to the Lear, deranged but deeply insightful, who emerges later — one reason that Yando’s performance of those later scenes has impressed audiences and critics less than his work in the opening.

In act 1— and my discussion in this essay is limited to act 1— it is Goneril and Regan, not the most trustworthy witnesses, who refer to Lear’s aging— and in a way that does not in the least suggest dementia of the Alzheimer’s sort. The former says, “You see how full of changes his age is” (1.1.190)— but she is referring to his emotionally capricious disin­heriting of Cordelia, which is hardly due to dementia, whatever we think does cause it. The latter replies: “’Tis the infirmity of his age, yet he hath ever but slenderly known himself” (294– 95), thus immediately qualifying the reference to age with an allusion to a long-term problem— and getting to the heart of the matter, as we shall see. Even they, then, do not suggest that he is suffering from dementia or mental weakness: at most emotional inconstancy, and that, they suggest, has probably been caused all along by his character.

To see why this is the right place to look, consider Lear’s human rela­tionships heretofore, as act 1 reveals them. With his daughters — even Cordelia, whom he appears to favor — he is formal, cold, domineering, manipulative. He wants set speeches that exemplify subordination. What he surely does not want is any part in reciprocal affection. As for friend­ship, there’s nothing even close. He has no wife, nor does he recall the one he must at some point have had. With Kent — both before and after his fall — Lear is the commanding ruler, determined to punish disobedience, though (later) willing to accept a loyal subordinate. His only relationship of potential friendship and reciprocity is with the Fool, who (unlike most real-life court jesters) doesn’t care about royal power — and the matura­tion of that relationship, as the play goes on, tracks or even helps to cause Lear’s emergence as a human being.

Martha C. Nussbaum is Ernst Freund Distinguished Service Professor of Law and Ethics at the University of Chicago. She is the author of Love’s Knowledge, Sex and Social Justice, Animal Rights (edited with Cass Sunstein), From Disgust to Humanity, and Philosophical Interventions, among many.

Saul Levmore is Graham Distinguished Service Professor of Law, University of Chicago Law School. He is the co-author of American Guy: Masculinity in American Law and Literature.

This article originally appeared in OUPblog on November 2, 2017, and has been reposted with permission.

This post was written by Saul Levmore and Martha C. Nussbaum. 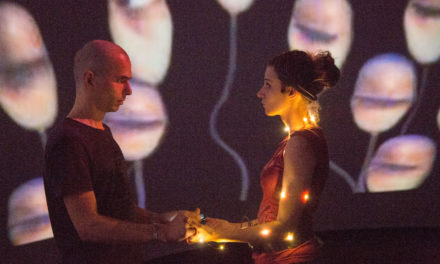