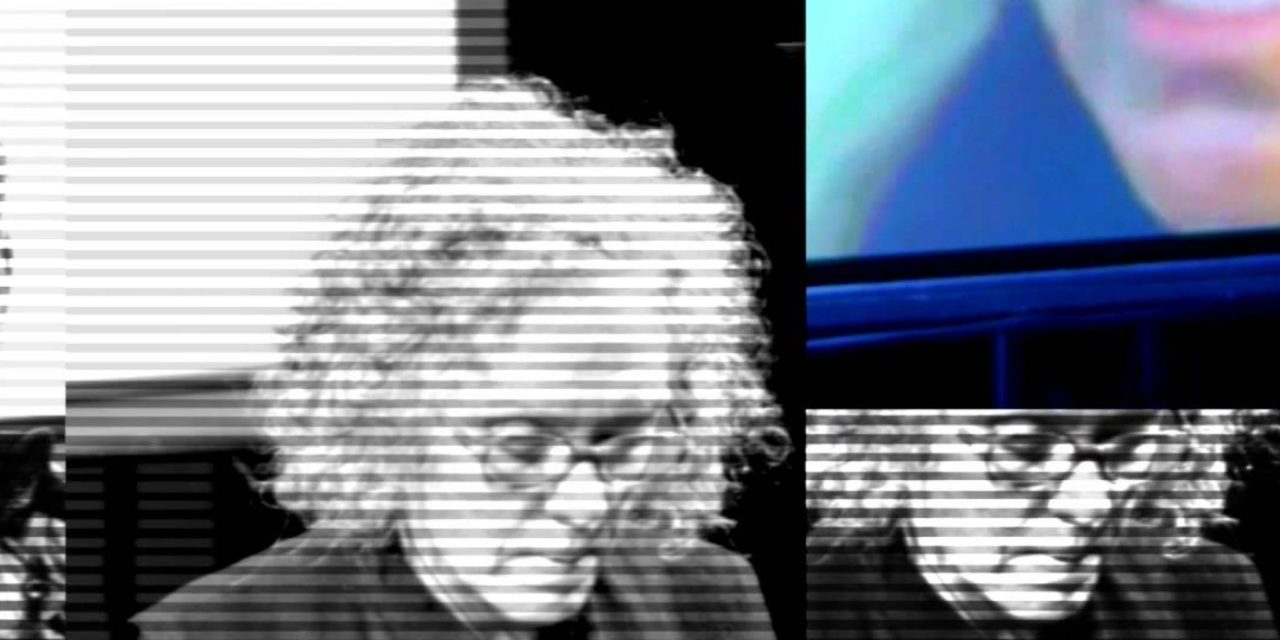 Sometimes a hasty creation can be inspired; The Wooster Group’s The Town Hall Affair turns out to be just such a happy event—an intellectual and theatrical hoot. The Group had planned to present Harold Pinter’s The Room (1957) in New York this spring, but ran into contractual difficulties with Samuel French and the Pinter estate following a ten-performance run Los Angeles. The Town Hall Affair — a work-in-progress shown for just two weeks in May — was quickly thrown together as a replacement.

Rather than subject a play from the western dramatic canon to their process of radical adaptation (Long Day’s Journey into Night, The Crucible, Phedre, among many others), Elizabeth LeCompte and The Wooster Group chose Town Bloody Hall (1979), a film by Chris Hegedus and D.A. Pennebaker that documented “A Dialogue on Women’s Liberation”— a debate moderated by Norman Mailer and held in 1971 at Town Hall in New York City. The debate was sparked by feminist outrage at Mailer’s book-length essay “Prisoner of Sex, “an impassioned (and egomaniacal) response to Kate Millett’s “Sexual Politics” (1970) that occupied the entire March issue of Harper’s Magazine.

The structure of the hour-long piece follows a familiar Group pattern: an introduction (from Jill Johnston’s Lesbian Nation: The Feminist Solution); The Event (the debate); a Digression (Johnston again); The “Happening,” a recreation of a wrestling match, adapted from an 1970 independent film directed by Mailer himself, in which he plays a famous film director who is making a movie while campaigning for President of the United States; and a dance coda (Johnston again.)

The staging is likewise familiar: tables and chairs face the audience with a video monitor mounted above the table showing footage from the documentary of the debate; actors speak the text verbatim into microphones, mimicking the film footage — the women from a podium stage left, the men from behind the table. The strategy of shadowing a film is another Group trademark, as in their Hamlet (2007), adapted from the film starring Richard Burton.

(The set design is not credited, but as is typical with the Group’s work, the lighting (Jennifer Tipton and Ryan Seelig), sound (Eric Sluyter and Gareth Hobbs) and video (Robert Wuss and Zbigniew Bzymek) create a sophisticated theatrical landscape.)

The piece begins with a loopy harangue delivered by an hilarious Kate Valk (as Jill Johnston in a long-haired wig sporting Johnston’s famous bangs) from her prose poem “On a Clear Day You Can See Your Mother” (later printed in the Village Voice and collected in Lesbian Nation): “The title of this episode is a new approach: All women are lesbians except those who don’t know it naturally (pronounced ‘nature-ally’) they are but don’t know it yet I am a woman who is a lesbian because I am a woman and a woman who loves herself naturally who is other women is a lesbian … of course all men are homosexuals being having a more sense of their homo their homo-ness their ecce homo-ness their ecce prince & lord & master-ness the 350 years of Abraham intersample Abraham lived for 350 years because the bible ages are only a succession of sons and fathers and grandfathers …” *

The debate proper follows. Maura Tierney in a sexy black dress as Germaine Greer (The Female Eunuch, 1970) speaks first, addressing the cultural assumption of the artist as male (from Freud); women are defined as being either menials or goddesses. Mailer (played by two actors — Scott Shepherd and Ari Fliakos) attacks Greer’s linear notion of human nature: “Women can be slobs and goddesses.”

Johnston speaks next, introduced by Mailer as a “master of free-associational prose” and continues reading from On a Clear Day: “He said I want your body. She said you can have it when I’m through with it.” Mailer attempts to cut her off — she’s well exceeded her ten minutes: “Come on, Jill, either play with the team or pick up your marbles and get lost.” An audience vote ensues; Johnston is voted down (barely) and begins to make out with two women who have come on stage. They end up rolling on the floor in a sexual embrace. This is the Digression.

Diana Trilling (a wonderfully subtle Greg Merhten) is the senior presence on the panel. Introduced by Mailer as “our leading lady critic,” she represents the Freudian/scientific look at sexual difference. While respecting the underpinnings of the women’s movement and acknowledging the tide of female unrest, Trilling warns of an authoritarianism within the movement that wants to erase a biological difference between the sexes and move toward a single definition of female sexuality. Hers is a highly literate presentation in the midst of growing chaos: Johnston’s sexual display and increasingly violent insults from the (film) audience, both fed and restrained by Mailer’s charismatic and self-serving performance as moderator.

Finally, Mailer takes his turn at the podium. For him, it’s ultimately a question of liberty; the extremes of the women’s liberation movement represent a left-wing totalitarianism of the worst order, terrifying because it is humorless. Much of Mailer’s “sexist” rhetoric sounds quaint today, even naïve, and was clearly considered neither radical nor outrageous at the time; he notes with pride that he represents the ethic of the mainstream educated male. Mailer is not without his own self-deprecating humor — if the audience insists on throwing jibes he will “slap his modest Jewish dick on the table” — but he remains primarily concerned with his role as showman.

Before Mailer can conclude his summary, the piece breaks apart amid the growing cacophony — this is The “Happening.” A second film, depicting the wrestling match, plays on an upstage monitor and is reenacted by the two Mailers. It’s a compelling, visceral fight, with Mailer’s wife, friends, and even child coming on to plead with the combatants to stop. Meanwhile, Johnston begins to make out with a crew member stage right, creating a fascinating and funny diptych of male violence and female sexuality that moves into the final coda: Valk alone, behind a scrim, dancing a beautifully awkward scarecrow-dance to a voice over of another excerpt from Lesbian Nation. Again, a familiar strategy — ending with a dance — and wonderfully realized here. Johnston’s truly radical, destabilizing persona frames the entire piece; as a jokester, a genie, a sexual shaman, she disrupts the event on film and on stage; a spirit of pure anarchy and a perfect emblem for the Wooster Group’s theatrical aesthetic.

Investigating a specific political event during a highly charged cultural moment in the history of women’s liberation seems to have liberated the Group from some of their recent overly-hermitic work. And whether or not it was part of the Group’s calculations that Hillary Clinton — who came of age at this crucial moment in the history of feminism — was to become the first female nominee of a major party for the Presidency of the United States, the coincidence can’t help but create a delicious, thematic frisson, delivering us full-circle to the present day.