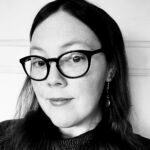 Marisa C. Hayes is a Franco-American scholar, artist, and curator. She has published reviews, books, and essays about the performing arts and film for a variety of print and electronic media, including the books The Oxford Handbook of Screendance Studies and Art in Motion: Current Research in Screendance. In 2017, she published her first monograph on the references to traditional Japanese theatre and butoh in the film Ju-on: The Grudge (Auteur/Columbia University Press). Her articles and reviews have been featured in Dance Magazine, Dance International, and Culture Vulture, among others. Currently editor in chief of the French dance journal Repères, cahier de danse at La Briqueterie - National Choreographic Development Center, Marisa also co-curates the International Video Dance Festival of Burgundy and teaches the Erasmus+ university summer dance program in Paris. Initially trained in classical ballet, contemporary dance, and theatre in both the US and France, Marisa also studied butoh in Japan with Kazuo and Yoshito Ohno. She has performed with Bread and Puppet Theatre and The Dance Brigade, as well as her own interdisciplinary project, Body Cinema. Marisa has a keen interest in promoting research and writing on Chinese opera, puppetry, and paper theatre; performance forms that combine her love of movement and visual art. She holds degrees in interdisciplinary arts, dance history, and visual studies from Goddard College (Vermont) and the Sorbonne in Paris.

It’s been nearly 100 years since George Enesco’s Œdipe (Oedipus) was created to much success on...

Does a diva ever really die? It’s a fitting question from the reigning queen of endurance art,...

In its simplest form, the proscenium is constructed of little more than cardboard. Small paper...