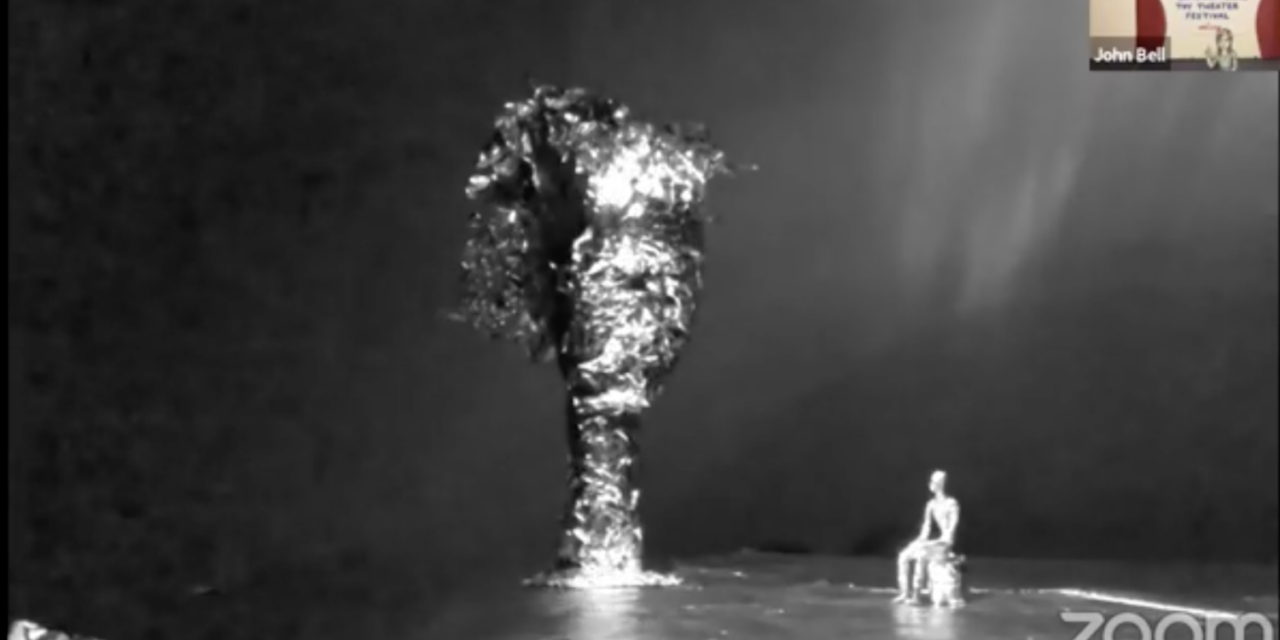 In its simplest form, the proscenium is constructed of little more than cardboard. Small paper figures and objects come to life via slots, rods, or other humble mechanics. But these modest means should not be mistaken for lack of ingenuity. To the contrary, contemporary toy theatre artists show no shortage of poetic invention, repurposing an array of everyday materials to create hybrid environments, storytelling, and movement. True to the etymology of the word microcosm—little world—these productions create an alchemy of scale, transforming the way we experience performance through the toy theatre’s intimate proportions.

Great Small Works, a New York-based performance collective, recently organized the first virtual Toy Theatre Festival, providing an online platform for international artists who responded to an open call. Drawing on their own work as artists and curators—the collective initiated the International Toy Theater Festival and Temporary Toy Theater Museum from 1993 to 2013—the event was streamed live in early April from their Facebook page. Hosted by Great Small Works puppeteer John Bell, the organizers merged Zoom and Facebook technologies to share short plays, toy theatre demonstrations, and films from Germany, Canada, Chile, China, Mexico, and the United States. Most artists proposed some variation of the proscenium arch crafted in paper or wood, while a few expanded upon toy theatre’s format to create puppet films or two-dimensional animation, all embraced by the festival’s open definition of the genre.

With half of the world now living under quarantine, the exponential rise in performance streaming options has left the public divided; some relish the accessibility, while others mourn the live experience. Yet in the case of toy theatre, the online exhibition format is a natural extension of the genre’s intimate appeal. The festival’s tagline “coming to a personal screen near you,” recalls toy theatre’s roots as a form of home-based entertainment that traces its history to early 19th century Europe. In England, affordable printed sheets and condensed scripts based on popular plays and pantomimes were sold to young audiences as souvenirs, allowing them to recreate performances at home. Toy theatre was popularized in other regions of Europe, particularly in Spain, Germany, France, and Denmark through the early 20th century.

More recently, toy theatre has experienced a subtle but vibrant revival at puppet festivals and dedicated events. But don’t let the word “toy” distract you. Toy theatre has always attracted adult aficionados, including Robert Louis Stevenson and Pablo Picasso, while adult performers and audiences are the biggest proponents of the genre today. Commonly known as “paper theatre” outside English-speaking circles, one might wonder if this term is a desirable alternative that relieves any stigma associated with the word “toy.” Yet, Victorian toys in England were a far cry from the mass-produced playthings of today, featuring elegant, often hand-crafted designs that bore the mark of artisanal excellence. Toy theatres also represented an important and accessible foray into the world of theatre arts for many youngsters, encouraging imaginative play using the voice and body. These roots can be regarded as a point of pride, even if like all art forms, the genre continues to evolve.

Shifting away from replicas, most of today’s toy theatres merge original paper arts and stories. And what better moment to bring theatre back into the home than during a time of quarantine? Great and Small Works is no stranger to art during times of crisis. Their serial project, The Toy Theater of Terror as Usual, began as a response to the impending Gulf War in 1991. This same sense of urgency can be felt throughout many of the festival performances, now viewable on the collective’s Facebook page. Jamie Leo’s A Pandemic Primer features digital avatars or pandemojis, tracing the evolution of plagues and pandemics throughout history. Numerous performances focus on the relatable theme of isolation under quarantine, drawing on individual anxieties. Others, while more ambiguous regarding the context of the pandemic, can be interpreted in light of current events, including Caitlin Ross’ paper proscenium that stages the Velvet Underground’s After Hours song. Objects and figures collide, corresponding to words innocently sung by Maureen Tucker, “If you close the door/ The night could last forever/ Leave the sunshine out/ And say hello to never.” Other short plays hone in on equally pressing concerns related to international politics, war, and ecology. In Have You Seen a Ghost Moose? the Modern Times Theatre from Vermont presents a surreal image: that of a moose steadily approaching an indoor bathtub. In a matter of minutes, a moose puppet and invisible narrator explain the sad phenomenon of how ticks are killing the state’s iconic animal, resulting in phantom-like patches of pale undercoat and skin where dark fur should grow. It sounds like unlikely material for a performance, but the unexpected is precisely what makes for such compelling viewing. A lone violin plays in the background, underscoring the solitary nature of the moose. We learn that moose, in contrast to white-tailed deer, have no comrades to remove their dangerous parasites, resulting in fatal blood loss. At least in toy theatre, one moose is able to find some relief by hopping in the bath.

Katherine Fahey creates and performs with her crankie, here inviting audiences to sing along to the words of Jane Taylor’s, The Star. Images courtesy of the artist.

From crankies (miniature moving panoramas) to tinfoil figurines, from well-loved poems to Futurism, from choreography for human hands to household items, the featured performances regaled online viewers for nearly two hours each night of the festival. Both evenings incorporated performances by members of Great Small Works, including Trudi Cohen. Her piece, a cardboard tribute to writer and social activist Grace Lee Boggs, provided a striking lesson in graceful minimalism. Artists from further afield, such as the German ThéÂtre Mont d’Hiver, engaged traditional toy theatre techniques. Their play, The Conquerers of the Sky, recounts the true story of the Montgolfier Brothers (creators of the hot air balloon), demonstrating that toy theatre remains an excellent medium for imaginative communication. ThéÂtre Mont d’Hiver (Birthe and Sascha Thiel) of Germany perform an original play, The Conquerers of the Sky. Images reproduced with permission of the artists.

Just what is it about the miniature that audiences find so captivating? Extremes of scale—whether giant (think Bread and Puppet Theatre’s pageants or France’s Les Machines de l’île) or minuscule, as in the case of toy theatre—immediately transport the viewer to a realm far from our own reality. And because we are enthralled by these impressive yet unrealistic dimensions, we are all the more receptive to the messages and poetry that emerge from them.

Mixed programs on April 1rst and 2nd drew hundreds of viewers during a live stream. The videos, archived immediately after streaming, already register views by the thousands. The festival program is available on Great Small Works’ Facebook page here. Keen to make your own toy theatre and don’t know where to start? The Ballard Institute and Museum of Puppetry (University of Connecticut), currently offers a series of online puppet workshops, including a toy theatre primer facilitated by festival host John Bell here.

Bell also hosted a conference on the history of toy theatre that can be found under videos on the same page.

If you don’t fancy designing your own, Benjamin Pollock’s Toyshop at Covent Garden proposes a beautiful array of historic and contemporary toy theatres for sale (and a few downloads) here. Based in London, Pollock’s is the epicenter of toy theatre in England and produces a dedicated podcast, Holding up the Queue. All episodes can be accessed here.