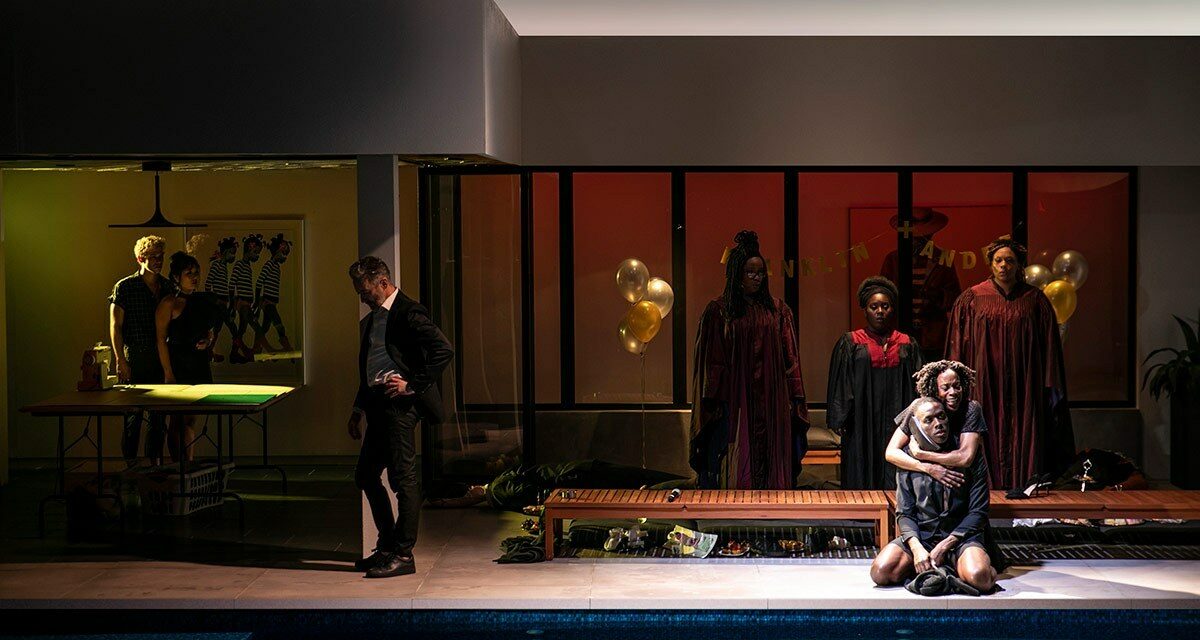 The English author Samuel Butler once quipped grimly that the death of a father was “a new lease of life” for any man, and therefore “those who have never had a father can…never know the sweets of losing one.” Butler didn’t know Jeremy O. Harris. Daddy, Harris’s thoughtfully outrageous play about a queer, young, fatherless black artist finding a substitute father in a middle-aged, white art collector shows that such macabre “sweets” are freely available. They even come flavored as melodrama.

Harris is a masterful provocateur. Still a third-year student at the Yale School of Drama, he has already marked out distinctive theatrical territory for himself at the radioactive crossroads of race, sex, and pop music. His two debut plays produced in New York this season, Slave Play and Daddy, have both been hilarious, exciting and seriously discomfiting. Both have also been lucky to have shrewd and strong directors—Robert O’Hara on Slave Play and Danya Taymor on Daddy—helping to smooth their tricky pacing and clarify their impertinent questions about social and racial categories.

Daddy’s material is scarcely less incendiary. It explores how whites and historically white cultural institutions—such as museums, galleries, and theaters—use minorities to signal their virtue and fuel their hype machines. Written before Harris entered Yale, it now looks remarkably prophetic about his current situation. He is opening a play in a major Off-Broadway theater a few short months after receiving a profane YouTube tirade from Tariq Nasheed about his previous play that blasted:

“Let’s be clear; this is a white suprematists agenda because they are the ones who fund that n***a.”

The run of Daddy, co-produced by The New Group and Vineyard Theater, is completely sold out.

Franklin’s gallerist Alessia (Hari Nef, terrific) has qualms about the arrangement, wondering why his mostly nude, black soft-sculptures (akin to Cabbage Patch Dolls) have suddenly acquired stylish and expensive clothes. Articulate Franklin, just out of art school, reassures her, spouting verbiage she knows just how to use for a pseudo-critical PR spin on his new work and “patron.” Harris has a keen ear for self-serving art-crit jargon.

Franklin’s show is a sold-out hit, and everyone is thrilled except his visiting mother Zora (Charlayne Woodard, superb), a devout Baptist who dubs the dolls “coon babies” and marvels at the spectacle of white folks carrying them around like precious objects. Her boy, she thinks, is so cut off from his roots he doesn’t even know where his inspired idea truly comes from. 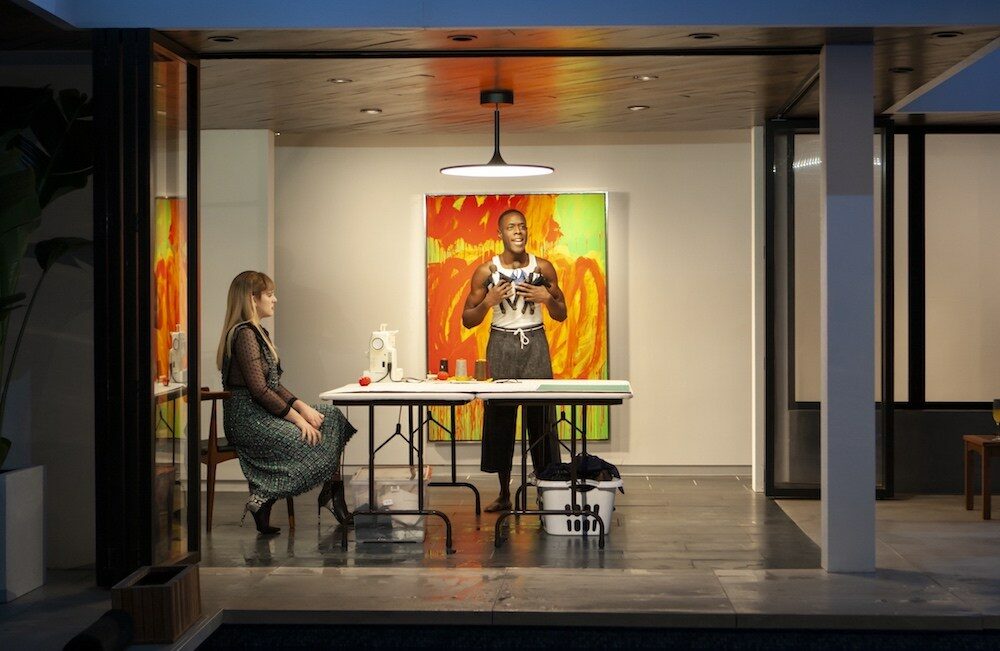 Subtitled “A Melodrama,” Daddy, like Slave Play, is nine parts sass and social satire to one part psychological realism. As a white, middle-aged, educated viewer, I’m positioned to see its virtues, if only because I can follow its flurry of cheeky-smart references. Franklin, for instance, at one point mentions Martha Nelson Thomas, the Kentucky outsider artist who may or may not have originated the Cabbage Patch idea and had it stolen from her. He also drops copious perceptive remarks about Basquiat, Twombly, Carl Andre, Ana Mendieta, and others, at one point using his disgust at Kara Walker’s gargantuan Sugar Baby (unnamed but pretty clearly intended) to explain white privilege to Andre.

Taymor has great fun adding droll touches such as Andre forgetting where his kitchen is, or Franklin twisting his body in time to his mom’s twists of a salt-grinder. The pool is also used for lots of activities other than swimming, such as sex, dancing, and baptism.

Water and bathing suits are the perfect environment for the play’s campy exchanges about defiant superficiality. Franklin invites two young friends to hang out with him on the deck: Bellamy (Kahyun Kim), an Asian-American Instagram and fashion junkie, and Max (Tommy Dorfman), a white actor. Bellamy is oblivious to Franklin’s “patron” dilemma because she also has an older sugar-daddy who she thinks really “sees” her even though she can’t read the love letter he wrote to her in cursive. Max says he’s “worried” about Franklin selling out to Andre, but Bellamy points out that he happily screwed a director and producer for a part in a pilot. So much for ethical purity.

For all the cleverness and verve of all this, Daddy seems to run out of breath in its final act (the play is nearly 3 hours long). The main problem is that Franklin shrinks rather than expands under the pressure of Andre and Zora’s struggle for his soul. Andre evidently wants to teach and care for him, which means possibly pocketing and cultivating him like some sort of living doll or privately-funded outsider artist. Zora, for her part—the play’s only likeable character in Woodard’s hands—wants to save him for God the Father and truth, which strangely seems to mean emasculating him with aggressive comparisons to his feckless, absent father.

This psychodrama quickly grows long-winded and schematic, and in a play like this, that’s a political as well as a theatrical matter. For the rising-star, black, queer hero of a new play by a rising-star, black, queer playwright to be reduced to a thumb-sucking, abject child as soon as he’s challenged to fly the nest is…well, kinduva big deal. Black rage rang out loud and clear in Slave Play, but it’s oddly dormant and recessive in Daddy. By the time the choir baptizes Franklin near the end he’s so shockingly limp and infantilized he’s practically a zombie. Allesia tries gamely to rouse his righteous ardor—

“Women African-Americans/ We are finally pushing aside the white cis het blowhard art bros of the past and just, like, proclaiming it, right? THIS IS OUR TIME WE ARE HERE. WE CAN TAKE UP SPACE TOO”

—but she might as well be talking to a corpse.

This turn of events is puzzling. If nothing else, it undercuts the theatrical pleasure of parricide that the play sets us up to expect. Nevertheless, I’m still dazzled by the panache and vision, and yes, the daring, raunchy subversiveness of this new dramatic talent. Anyone who cares about the pulse of theater ought to welcome his arrival.

This article first appeared on Jonathan Kalb on March 6, 2019, and has been reposted with permission. 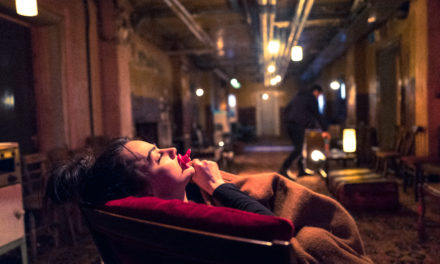