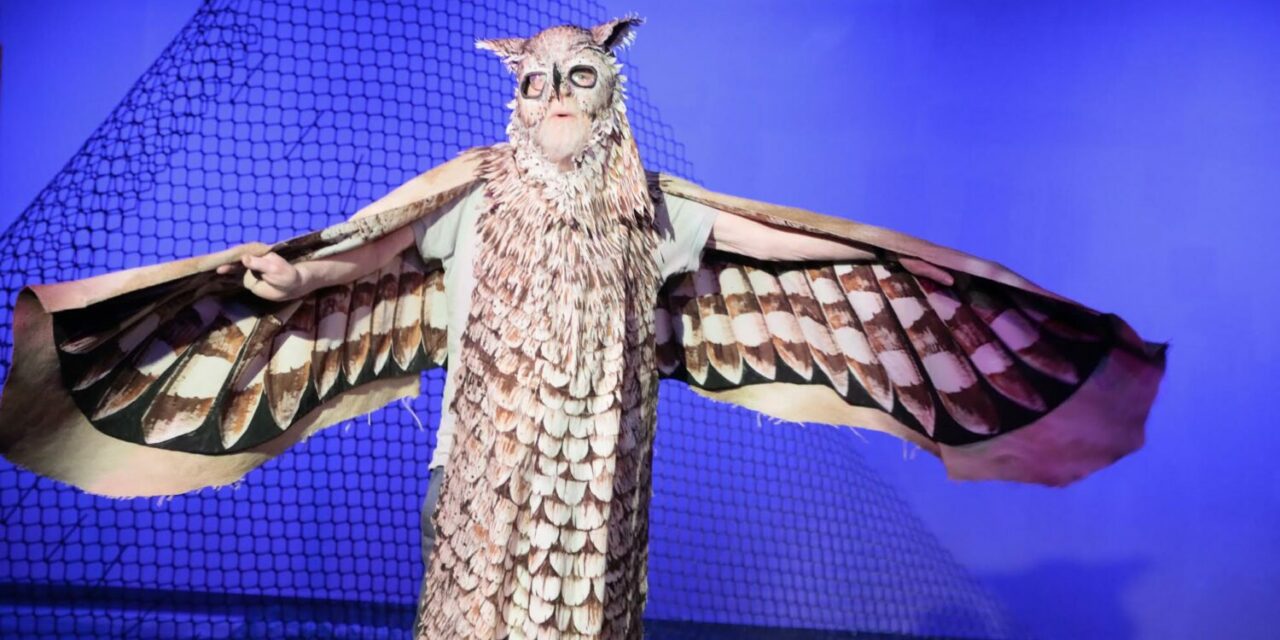 Karen Malpede’s plays scream “Pay Attention.” Thus I titled my 2001 New York Times article on I Will Bear Witness, her play based on the war diaries of Victor Klemperer, and the same is true now, almost two decades later, in thinking about Malpede’s latest work, Other Than We, a “cli-fi” play, which ended its run at La MaMa in early December 2019. Malpede is an eco-feminist, pacifist writer and director, who in collaboration with her life partner, the extraordinary performer George Bartenieff and the late Lee Nagrin, have produced activist poetic theatre under the banner of their company, Theatre Three Collaborative for the past 33 years. In this work as in Malpede’s Extreme Whether, which she also directed and produced at La MaMa, Malpede uses image-rich language and striking stage pictures to transmit an urgent call for global unity, imagination, transformation, and action, in the face of current and imminent climate catastrophes.

Women are primary power sources and healers in all of Malpede’s work. They struggle mightily with male lovers, torturers, teachers, and family members. Other Than We begins with two women encased in a movable cube constructed of scaffolding stage center (Donald Eastman is the set designer). Michelle/Mick (Lisa Birnbaum) has a sharp tongue and an unquenchable appetite for Eve, her lover, and for red wine, which she consumes throughout the play. Eve (Emily Fury Daly) has a softer edge but asks hard questions; her honest, direct responses to and reflections on the untenable environment and circumstances that trap these women draw us in. She is the granddaughter of Opa (Bartenieff), an aged and revered philosopher/revolutionary. These three are among the privileged few, who along with some refugees that work for them, have survived a cataclysmic “Deluge” and occupy “The Dome,” the only livable space on the planet. As in Margaret Atwood’s dystopic novel, The Handmaid’s Tale, those in power in The Dome deem that the human race cannot survive without complete control and surveillance of women who can serve as “birthers.” Michelle and Eve are on this list. But we quickly learn they are an obstetrician (Mick) and a neuro-scientist (Eve) with their own radical plan – a utopian vision for a reconfigured race that will be ‘Other Than We’– hybrid creatures, human/non-human that will adapt and sustain themselves in the treacherous territory outside of The Dome (Eden?). This kind of utopian vision and hope – and the collaborative healing powers of women working together — is a through-line in all of Malpede’s plays. But instead of struggling with men – and being in opposition to them, in Other Than We, Michelle and Eve enlist the help of two men on their mission. They need Opa to join them, as he is a master/teacher of protest language, stories, and songs. They also enlist the help of Tenaka (Tommie J. Moore), a physician/refugee, now working as a janitor in The Dome, who provides sperm for their eggs and who, like Opa, becomes integral to the configuration of a new family model in Parts 2 and 3 of Other Than We(this transformation of family is another image or trope that appears frequently in Malpede’s work).

Parts 2 and 3 of Malpede’s play take place outside The Dome, where the foursome breaks into two new pairs. Both women are largely pregnant now; Michelle and Tenaka set up camp, cultivating food from the sparse greenery that still exists, in a precious oasis that Tenaka finds. Fragile Eve and even more fragile Opa have escaped The Dome too; they hide out in a truck and then a cave, bringing to mind King Lear and Edgar clinging to life at the bleak edge of the world. Although Malpede’s language in Part 1 has the clipped minimalist rhythm of some works of Beckett, Pinter, and Fornes, in Parts 2 and 3 – outside The Dome — her characters warm-up (literally and figuratively – there’s no protection from the brutal temperatures) and are also playful and fleshier, in language as in body. Each of the characters has a kind of “aria” in the 2ndor 3rdsections, some of which are more smoothly and effectively integrated into the piece than others.

As is often the case in Malpede’s works, sex that is alternately kinky/disturbing/comic takes center stage – after watching Michelle’s and Tenaka’s love scene in the garden you may never think about asparagus the same way again. Whereas pregnancy and pregnant women have always featured prominently in Malpede’s plays, Other Than Wegraphically details the daily-ness of Eve’s and Michelle’s double pregnancies where the enwombed ones are full of untold possibilities – mysterious, fearful, hopeful, powerful. Both women exhibit love/hate relationships with their mother-identities, and in this brave new world of high-stakes birth, empathy and care-giving are also re-born. The men – Opa and Tenaka — become the primary nurturers of the “newbies,” shifting the babes from breast to breast. [In fact, it’s no longer science fiction that males of a species can be reprogrammed biologically to breastfeed their young.]

Each of the characters has roller-coaster journeys, and the performers bravely, energetically commit to the wild, fantastical ride that is Malpede’s play. Moore was not always up to the challenge of the torrent of language that characterized his lament/manifesto detailing the loss of his family in the deluge. Fury Daly’s and Barteneiff’s scenes “on the road” were among the most engaging in this production, demonstrating the depths of their characters’ richly nuanced relationship. The designers’ contributions to the final scene, featuring Barteneiff alone onstage were powerfully effective, especially Arthur Rosen’s evocative, moving sound-scape and the riveting interspecies transformation costume designers Sally Ann Parsons and Carisa Kelly achieved, as Barteneiff morphed before our eyes from Opa into Owl. An unforgettable image – both startling and provocative, which continues to resonate, as do the creative and terrifying possibilities evoked by Other Than We, Malpede’s latest contribution to the crucial realm of eco-feminist theatre.