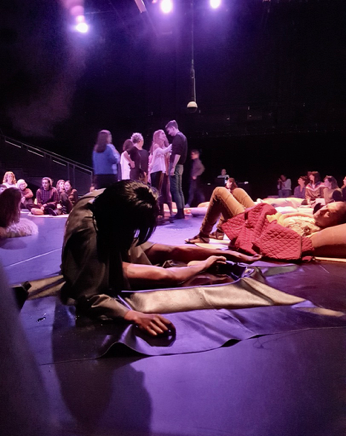 How far can bodily interaction amongst the audience members, with performance objects, and with the performers go? Is it ok to be touched by and to touch what is available within a black box performance space? The two-evening event Inchoate Buzz curated by the British-Chilean choreographer and dancer Fernanda Muñoz-Newsome, as part of Sadler’s Wells’s WILD CARD series, offers a testing ground for exploring the role and agency of the audience alongside the performers at an interdisciplinary immersive performance event. 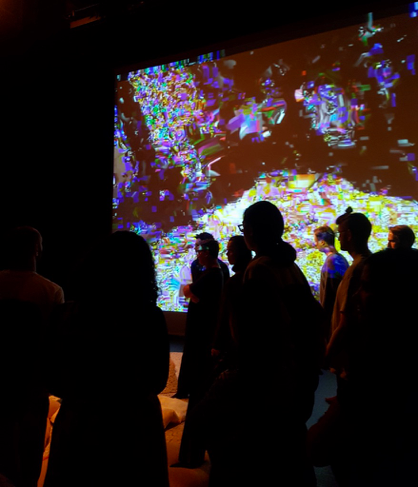 Embedded within the current trend of performance-making that merges immersive theatre strategies, darkness and the installation format of visual art exhibits, Inchoate Buzz invites members of the audience to experience performance and art through bodily and visual touch, aimed at increasing the kinaesthetic awareness of bodies within the performance space.

Upon entering the Lilian Baylis Studio that evening, the members of the audience are asked to take off shoes, to leave belongings and if they are ok with being touched. The initial impression of feeling freed from the everyday packhorse-like carrier condition and at the same time feeling awkwardly intimidated (perhaps it is not ok to be touch by strangers inside a dark space like this one?) passes away quickly as the performance event itself is anything but electrifying.

At first, Muñoz–Newsome verbally introduces the space before dancing in the gaps between the single bodies, standing around as if they were stiff and unresponsive body-based sticks. Institutionally-framed, the people are perhaps waiting for action but not necessarily for encounters to happen amongst the present people— anyhow, not much happens in between. As the evening proceeds, Muñoz-Newsome’s audience is instructed on how and where to move. Not much room is given to individual moves and turns as the evening follows the scripted menu that the performers have in mind. Nothing seems to happen naturally, no one is put on stake, everything appears to be choreographed. 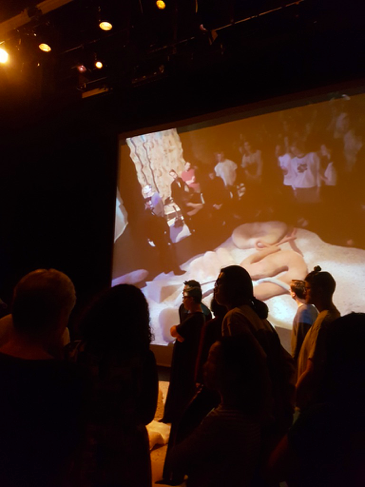 Immersed within this tensionless safe social space, the audience chills out on India Harvey’s super soft mobile furniture-like objects on the floor whilst taking in the sound work of the musicians Kiera Coward Deyell (Black Obsidian Sound System) and Isabel Muñoz-Newsome, the lead singer of the London-based band Pumarosa. As relaxation and automatic breathing rhythms set in amongst the present bodies, the performers Last Yearz Interesting Negro (Jamila Johnson-Small), Rukeya, and Eve Stainto blend into the same spatial, apparently non-hierarchical performance plane.

Muñoz-Newsome’s carefully reconsidered act of bringing together people as well as object-based, sound, performance, and large-scale new media art tears down artistic categorizations to temporarily perform as one collective. The audience, despite taking center stage, continues to literally perform a still audience within her curatorial framing. At least the members of the audience are given more freedom for leg and arm movement and can from time to time watch themselves projected as part of the large-scale new media projection.

Inchoate Buzz could have been really good if there had not been too much of deep relaxation and strategically veiled instructions; and instead, some more intuitively eruptive body-mind decentering offset by human interactions to make the intended interactive performance more playful. Twisting the concept of playing for show, showing to play, the performance evening was still a good one, not completely silent as its buzz is yet to be anticipated.