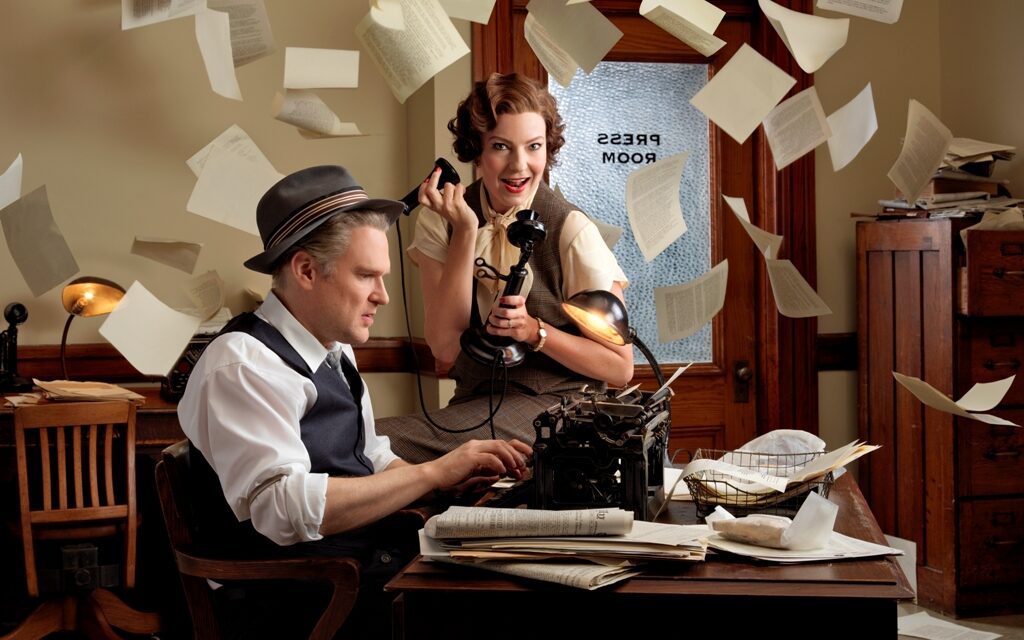 Chicago. 1928. The hard-boiled boozy reporters on the crime beat are sitting around a table, playing poker and wisecracking about the fate of the last murderer to hang before the electric chair arrives on the scene. It isn’t easy passing the time like this, running interference between the police and the mob, making stuff up, unless you’re lucky enough to get the skinny on a real story. And hanging doesn’t even count for the front page anymore.

Stratford’s new adaptation of the tough-talking newspaper comedy by Ben Hecht and Charles MacArthur (familiar terrain for two ace Chicago crime reporters, themselves) richly deserves its reputation as a fast-moving classic of the American theatre. Set in the rough and tumble Prohibition era of a Chicago just leaving the Roaring Twenties (Jazz interludes and modified flapper dresses signal the waning decade) and hurtling headlong into the Stock Market crash of 1929 and the Great Depression, it’s a city wracked then, as now, by mob violence, big city politics, guns, and racial tensions always simmering beneath the surface. The Front Page’s hallmark is its wise-guy wit and cynical irreverence, its sharply outlined comic characters lurching forward into full-blown farce. If we haven’t seen the play before Stratford’s pitch-perfect production, cunningly adapted by Michael Healey, and directed by Graham Abbey with a keen eye to the drama’s potential for gags and physical comedy, we’ve likely seen it at the movies. A whole generation of gangster films and Screwball comedies familiarized audiences with the wise-guy dialogue of prolific screenwriter Ben Hecht, while The Front Page, itself, was adapted for film no less than three times.

The play opens in a cluttered newsroom with a single window overlooking the gallows, a convenient stage architecture for the machinations of the plot. Characters come and go, falling through the window and threatening to leave town entirely, but, in reality, everything takes place in one room, a self-contained world of often simultaneous action made possible by the dynamic potential of the Festival Theatre’s Thrust stage. Into this carefully oiled stage machine are built a range of comic effects: slapstick moments in which characters appear with pants down or falling into molasses, malapropisms in which words slide into unrecognizable meanings, grim humor in which the former girlfriend of the condemned prisoner is invited to a “necktie party”, or escaped convicts are hidden away in roll-top desks.

Much of the comic business flows directly from characters who are true to type. As in the gangster world, they are known by their monikers: Pinky, Diamond Louie, Trotsky, “Cookie” Burns, while everyday expressions like “23 skidoo”, “scram” and “swell” deliver a whole larger-than-life era in the boom city of a rapidly changing industrial heartland America. The cynical reporters want the execution timed to the morning edition, but their hearts of stone are momentarily challenged by a prostitute with a heart of gold. In the final scene of the play, this collision of melodrama stereotypes will deliver the hilarious send-up of a surprise ending.

But there is also truth in these stock characters who personify the city’s crooked politicians, grifters, and mob types, even if they don’t have the fancy words to express the moral stench (“City hall is like an Augean stable. Look it up”). The whole backstory of the action is rooted in tense Chicago race relations. The white Anarchist Earl William who allegedly pulled the trigger on a black policeman (he is likely innocent) is to be hung to bolster the Mayor’s upcoming re-election by marshaling the black vote.

Juan Chioran’s performance captures the larger than life city official who had real-life counterparts in a string of famous Chicago mayors with their own mob-like power. When the governor sends an emissary, Mr. Irving Pincus, with a temporary reprieve for Williams, the Mayor hastily bribes him so it is never delivered. Meanwhile, his “idiot-pants” sidekick, Sheriff Hartman (Mike Shara deservedly got the most laughs of the night, playing the dumb as a rock law-enforcement officer) helps in the last minute assessment of the prisoner by giving the psychiatrist a gun to re-enact the crime. Before we know it, Williams has the gun and is out like Flynn (his prototype was an actual Limerick-born criminal who was never seen again and is thought to have escaped to Ireland.)

The interlocking story that sets the action in motion is that of Hildy Johnson, the star reporter who is about to marry his fiancée Peggy Grant and take up a new life as a tame insurance agent in New York. (In Ben Carlson’s nuanced performance of the central character, Hildy is the straight foil to the other comic characters.) Both Peggy (a fine Amelia Sargisson) and her mother (an eccentrically funny turn by Rosemary Dunsmore) scurry in and out of the room to press Hildy to leave on time.

But, what we know, and what they suspect, is that Hildy is already an adrenaline junkie hooked on his job. When William falls from the window into the press room, Hildy is immediately back on the job, phoning his boss with the “scoop”. For his plan to work, though, his future mother-in-law who has already seen the escaped convict has to be temporarily removed from the scene. When Diamond Louis (Michael Blake is brilliant in the role of the small-time thug) is enlisted for the job, there is one hilarious moment when, trapped in his gangster argot, he gets it wrong and almost has her packed off for good.

The gender-shift in the script is the most important of a number of changes in Michael Healey’s unflaggingly strong adaptation (references to fake news and impeachment bring the play into the present moment) and it delivers a bonanza in the casting and performance of Maev Beaty, who is wonderfully inventive in the role. The play’s original character of Walter Burns becomes Penelope “Cookie” Burns in Healey’s version, but it is not the first time that new interest has been added to the play with a gender reversal.

The 1940 film adaptation of The Front Page, entitled His Girl Friday, (directed by Howard Hawks) stars Cary Grant as Walter Burns and Rosalind Russell as Hildy Johnson. In Healey’s adaptation for the Stratford production, it is the “boss” herself who commands the stage as a woman with a past. A former chorus girl from Minnesota named Esther Katz, who is a graduate of the school of hard knocks, she married her husband in the elaborate ruse of standing in for the line girl he had really chosen. But “Cookie” is a firm believer that people make their own luck- and love.

In Beaty’s hands she is a strong, complex woman, as jaded as her reporters in her language and view of the world, but also idealistic in wanting to use the paper she has inherited from her husband to clean up the corruption in Chicago (in the post-Watergate era, Healey could not help but have had the model of Katharine Graham of the Washington Post in mind). But, Beaty is also hilariously funny, all elbows and joints akimbo, with a strong physical stage presence. (Kudos to Costume coordinator Kimberly Catton here, as in the case of the magical Diamond Louie and a number of other characters for helping to define character through wardrobe. )

The final reversal of The Front Page’s back-and-forth contest between cynicism and sentiment belongs to “Cookie” Burns. In this Prohibition Chicago, in which politicians and the mob morally change places and reporters straddle both worlds, gangster argot became the lingua franca of the day. Soon, it would spill over into film (both mob films and Screwball Comedies), hardboiled detective fiction and its inheritor, film-noir, and even the high-low theatre of playwright Bertolt Brecht, who was obsessed with the gangster world of Chicago as the demi-monde of brute Capitalism. At times, he spoke as if he had brushed shoulders with Al Capone, himself ( “Sometimes the shortest distance between two points is a crooked line”).

In his work as one of the most highly-regarded and prolific screenwriters in Hollywood history, Ben Hecht specialized in that kind of seemingly amoral hardboiled language in which the first rule was not to wear your heart on your sleeve. It helped to define not only a certain kind of masculinity but also femininity in transition (think Joan Crawford and Bette Davis) as women sought to make their way into public space for the first time, unsure of what exactly that meant. As for the play’s preoccupation with truth and lies, and the responsibility of newspapers and the media to “get it right”, not much seems to have changed. Almost a century later, far from being a museum piece, this really splendid production of The Front Page, bears a striking resemblance to our contemporary present.

The Front Page plays from July 30 to October 25 at the Festival Theatre.

This article was originally published by Capital Critics’ Circle on August 22, 2019. Reposted with permission. Read the original article here.