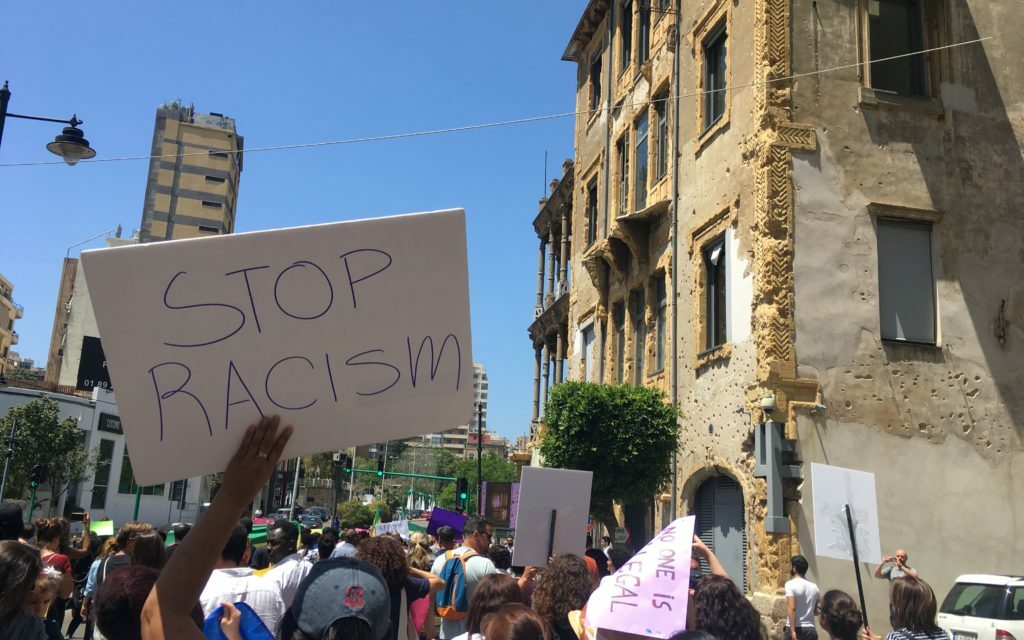 I’m not apologizing: this is going to take time.

Visit a website. Choose an image: of a bag of rice, or a hibiscus flower, or a protest with a placard saying “Stop Racism.” Download a soundtrack, make a journey, and listen.

Homemakersounds.org is a collection of soundwalks made in collaboration with migrant domestic workers in Lebanon and the UK. The soundwalks invite members of the public to retrace the steps of conversations recorded in places with personal or community significance to their makers. Some are sites of escape from abusive employers; others are routes of protest or collective activism.

You can wander at your own pace, but you can’t skim read or fast-forward. Better you move slowly, like walkers do when they are thinking hard about something that isn’t where they are going. This is how most of the soundwalks were made: walking side-by-side, slowly, in conversation. After the walk, the recordings were edited collaboratively, a painstaking process. We used a free-to-download editing software, and collaborators were paid an hourly-calculated honorarium for their creative work. Amara’s soundwalk we are workers ended up at just over 10 minutes, but she spent 13 hours over several days editing it. On reflection, she said:

Yet not all the soundwalk-makers had as much time to offer. The collaborative intentions of the project were at times compromised by the realities of labour, precarity, unpredictability and transience that characterize many migrant domestic workers’ lives. If employers had unexpected guests, a day off would be retracted at the last minute, without pay. If their migratory status came under review, concerns about visibility and deportation might make somebody withdraw from the project entirely. In Lebanon, a popular revolution started on October 17, and roadblocks, fuel strikes and fears of clashes meant that many domestic workers couldn’t travel around for days, or weeks. Some soundwalks have an open-ended instruction, like “Listen on an empty stomach,” because to make a site known would be to compromise the anonymity of an individual or community group.

Because their work is often undervalued – seen as unskilled “women’s work” – domestic workers often face a lack of time, along with a lack of pay. Ann, maker of not nothing, was a nanny in a house of eight children, also tasked with cleaning, ironing and cooking. She survived on leftovers from her employers’ plates, and when she finally decided to escape, weighed just 37kg. In her soundwalk she remembers not having time to sleep, take a shower, or even go to the toilet. Used to having their own home-life serviced, it was continually astonishing how little respect employers had for domestic workers’ entitlement to rest and leisure.

Each soundwalk expresses just a fragment of a person’s experiences and perspectives. As listeners, it asks us to acknowledge the limits of our understanding, as well as our points of affinity, alliance or empathy. This collection of soundwalks aims to centralize migrant domestic workers’ own decision-making about what story to tell; not to fully capture an individual’s life story or an experience shared by an entire population. The collection is a small one, largely because of the demands placed on each collaborator to give up their time, from an already over-burdened schedule. Sometimes making that demand at all would have been inappropriate.

Working “behind closed doors,” as Rose puts it, many domestic workers feel a sense of invisibility. As an activist who has organized with other domestic workers for more than 10 years, she’s at times disheartened by the lack of change she sees around her.  “Why we sacrifice every single year to march, and nobody’s hearing us?” she asks. Hearing just a small part of what Rose has to say will take you 26 minutes and 55 seconds. In a virtual world of clickbait, listicles and soundbites, it sounds like a long time. We’re not apologizing.