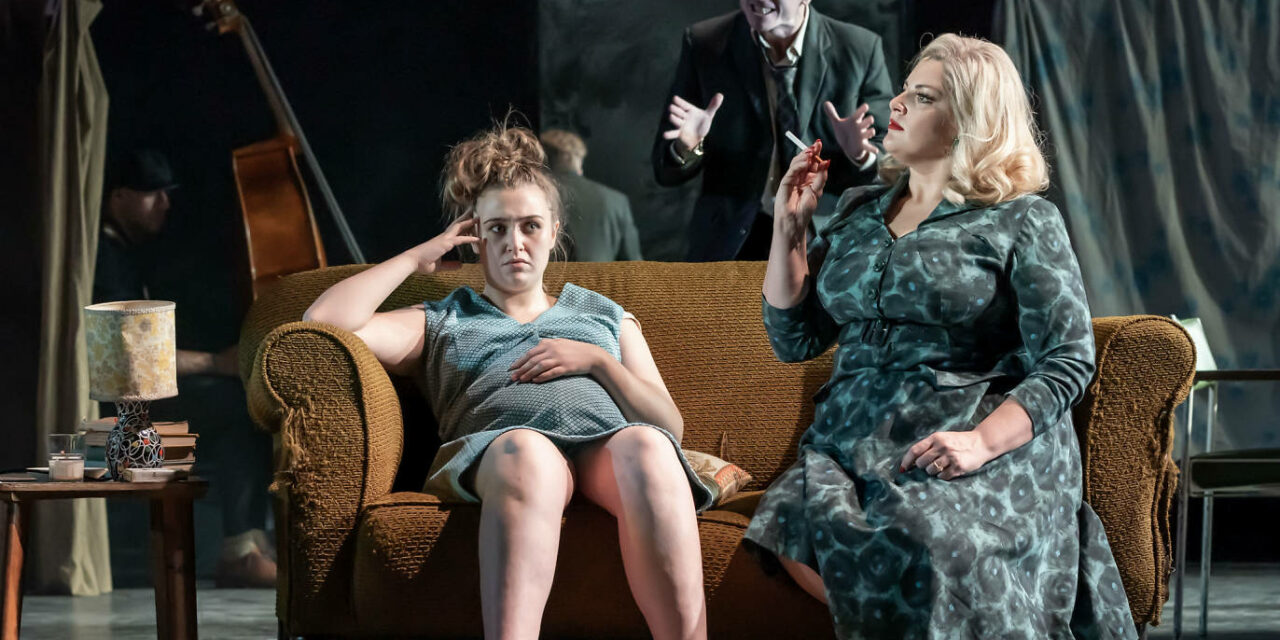 Gemma Dobson, Tom Varey, and Jodie Prenger in "A Taste of Honey" at the Trafalgar Studios. Photograph: Marc Brenner

It is hard to believe that Shelagh Delaney wrote A Taste of Honey when she was only nineteen. This increasingly textured and knotty play, which received its first—and famous—staging in 1958, betrays a rare dramatic maturity. Set in a gloomy Manchester flat, A Taste of Honey tracks the dysfunctional, cyclical relationship between single mother Helen and her teenage daughter Jo. A major representative of the mid-century British theatre’s social-realist turn, the play imagines and develops this caustic dynamic in the shadow of the couple’s economic and social precarity.

Produced by the National Theatre, Bijan Sheibani’s revival of this landmark work appears intent on spicing up Delaney’s realism with a few bold touches. Most prominently, a three-person band remains scattered on stage the whole time, each musician couched within Hildegard Bechtler’s simple, steely set, as though they were fixtures. Their music underscores many of the key moments in the manner of a soundtrack. When it comes to transitions, Sheibani amplifies this musical key, incorporating songs performed by the cast and some light dancing. As such, the spirit of a tacky musical haunts A Taste of Honey: both the songs and the background music inadvertently obscure the play’s tonal undulations. The continual presence of the band on the stage also dilutes the production’s atmospheric impact, preventing Helen and Jo’s unkempt flat from conveying its alienating force.

For a play that sets great store by the unspoken and the unspeakable, Sheibani’s production is too uncomfortable with silence. There is barely a moment when the tension in the room percolates without any sound. Though Sheibani generally brings out well-defined performances from his accomplished cast, their delivery remains too fast-paced for much of the play, which results in some loss of nuance. This is especially the case with the first act, where the sharp-toothed, passive-aggressive sniping between Helen and Jo turns somewhat mechanical. Fortunately, the second act’s tender scenes between Jo and her gay roommate Geoffrey pay more attention to making sure that the lines land with due force.

Barring their overall tendency to rush things through, Sheibani’s cast is commendable in their handling of the characters. Jodie Prenger’s Helen is a physically dismissive, cocky mother whom Jo thinks doesn’t care for her at all. Gemma Dobson imbues Jo with changing shades of gravity: she is particularly good in conveying Jo’s central conflict between her yearning for independence and her growing need for care and intimacy. Stuart Thompson presents an elusively reliable Geoff, while Durone Stokes delivers a brief but satisfying performance as Jimmie, the Nigerian soldier who leaves Jo pregnant. Tom Varey is a devilishly buzzing Peter, the sketchy car-salesman whom Helen marries and ultimately abandons.

Sheibani’s production succeeds in making the play’s primary preoccupations legible, but it doesn’t necessarily brood upon them in fresh ways: A Taste of Honey is a work that features ambiguously tangled, tensile relationships, and this revival could have benefitted from a more robust engagement with such intricacies. The play’s web of conflicting desires and dependencies is fairly visible on this stage, but remains relatively unexplored. It’s all a bit underwhelming.