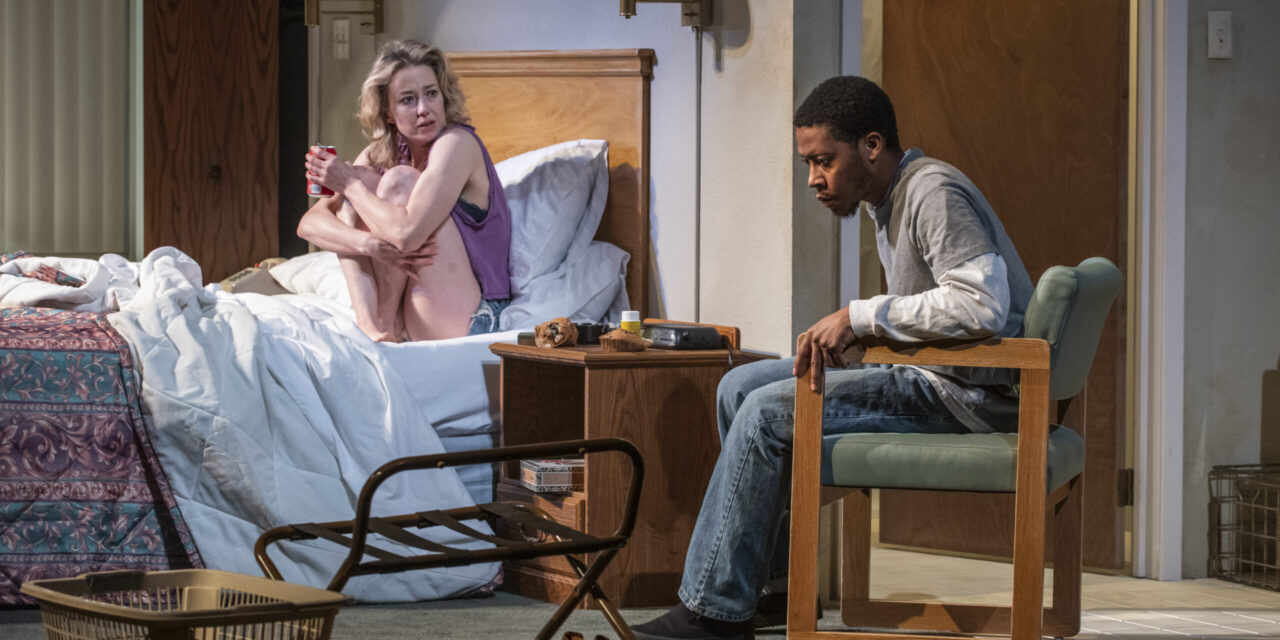 Tracy Letts’s Bug may be fourteen years old, but this tale of a couple convinced that they are suffering an insect infestation feels infinitely more topical now than when it was first seen in London’s Gate Theatre in 1996. In an age of fake news, with conspiracy theories and paranoia promoted at the highest levels of government, and coronavirus reshaping our understandings of movement and contamination, David Cromer’s taut production for Steppenwolf Theatre company feels both timely and resonant.

A tawdry hotel room on the outskirts of Oklahoma City serves as the location for the meeting of two outsiders fallen on hard times. Thirty-something Agnes White is fearing the return of her ex-husband Jerry from prison; he has a history of domestic violence and a track record of stealing her hard-earned cash. She is still trying to come to terms with the loss of her young son Lloyd over a decade earlier—she left him in the car for a moment running back to the supermarket to get an onion and on her return, Lloyd was gone. In between shifts as a waitress at a local diner, she snorts cocaine with her friend RC who is trying to secure custody of her child. Only when RC brings in Peter Evans, the lonely Agnes finds a kindred spirit to bond with, leading to a co-dependency that proves destructive for both of them.

Peter appears to have deserted the US Army and is on the run. In Namir Smallwood’s performance, he is intense, intelligent but fearful, looking around him as he scuttles with small steps across Agnes’s cramped motel room—there is something of a bug in his darting moves. Peter is convinced he is being spied on. Agnes is being watched by Jerry who, in Steve Kay’s loud performance, bursts into the room on three occasions, occupying the space with a daunting and dangerous sense of entitlement. Jerry knows no limits, treating the space like his own, pushing Agnes to one side while scrutinizing the largely still Peter with bemusement. There is a gentle awkwardness to Agnes and Peter’s courtship within the confines of the cluttered motel room: her gauche invitation that he can stay the night; the need for companionship that brings them together; her confusion as he starts seeing bugs—first the occasional bed bug and then more intensive clusters that he claims are under his skin and in his eyes. Soon the messy hotel room has been taken over by a row of cleaning lotions and potions, a microscope for examining the bugs and a large notebook where Peter scribbles his findings. Heather Gilbert’s lighting also shifts from the realistic hues of the opening scene to bluer artificial tones as the action progresses. For the final scene, Peter and Agnes have transformed the motel room into a spaceship-like cocoon covered from floor to ceiling in tinfoil zappers to protect themselves from the critters that Peter believes have been planted on him by the government authorities—part of a wave of secretive scientific experiments on vulnerable military personal.

Whether the bugs are real or not is a secondary concern in Letts’s tightly woven play. In an age of surveillance where our data is used and abused, our web searches perused and mined, and where our phones track our movements, Peter’s paranoia appears all too credible. Peter may arrive with a conspiracy theory in place about his surveillance at the hands of guarded military personnel, but the play expertly shows how everywoman Agnes gradually comes to lose control of her mind and her actions. In Carrie Coon’s nuanced performance, Agnes’s desperation for companionship is both painful and moving. She sits hesitantly at the edge of the bed when initially speaking to Peter as if afraid of getting too close. She weeps uncontrollably, shutting herself away in the bathroom when Peter leaves her, fearing he will be taken prisoner by military doctors. Her hugs with Peter are marked by anxiety and anguish. Her desperation to know the whereabouts of her missing son leads to her initially trusting the doctor who informs her of Peter’s schizophrenic condition. Her solace in crack cocaine that she smokes with an increasing sense of panic, seeking some sort of reassurance in its calming properties, shows a vulnerability that proves increasingly unsettling. She is exploited in different ways both by the overtly violent Jerry and by the ostensibly defenseless Peter. Only, as the play progresses, Smallwood’s Peter acquires a growing sense of certainty and a coercive quality that appears as unnerving as that of the loud Jerry. If he is a bug contaminating Agnes’s life; Peter brings a different—although no less hazardous—level of contamination into her domestic space.

The final scene has much of the spirit of the Gothic Killer Joe as Agnes and Peter are wired into a sense of feverish panic. David Cromer’s production lulls the audience into a false sense of security—the gentle rhythms and Beckettian pauses of the early scenes are supplanted by a growing farcical tone of dark, surreal comedy in the latter half. Jennifer Engstrom is excellent as the gum-chewing, pragmatic friend who bemoans the day she ever allowed Peter into Agnes’s life. Randall Arney has a slippery quality as the doctor who comes into the room to pick up Peter—almost impossible to read and infinitely more perilous because of it.

Takeshi Kata’s set moves from the ordinary to the extraordinary—as bottles of wine,  glasses and domestic detritus are replaced by Peter’s surveillance tools. The bed placed center stage is brilliantly used as a space of both refuge and complicity; the site of Jerry’s violent abuse of Agnes but also the place where Peter begins to persuade Agnes of his way of seeing the world. In the distance, a closet and bathroom provide spaces into which the characters temporarily retreat. The painting above the bed affords a vision of a mythical pastoral world from which the characters are increasingly isolated. Cromer manages the pacing with a veritable understanding of the rhythms of both science fiction and horror—and as the production builds into its final fearful moments, the tone accelerates into a frenzy that spirals out of control.  The ending is both terrifying and terrific and it demonstrates the tremendous power of this early, unsettling Letts’s play for our contemporary age.