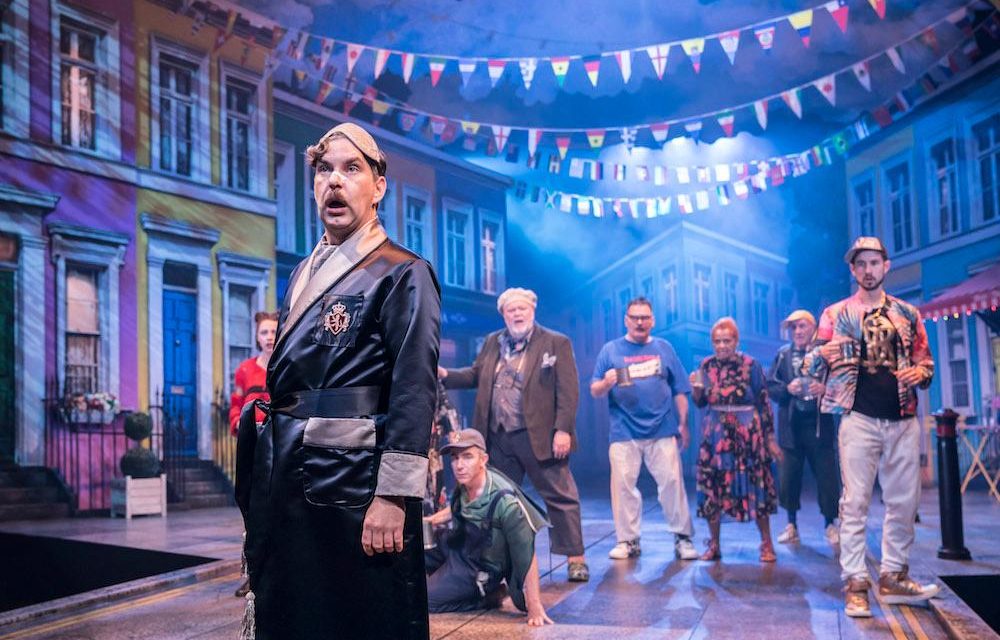 If music be the food of fun, play on! In fact, give me excess of it, surfeit even. If this is how you feel about live performance then you are in luck. Actor and director Kwame Kwei-Armah has returned to London, after a stint as artistic director of Center Stage in Baltimore, to take up the same role at this venue, and his first show is a masterclass in popular theatre: inspired, of course, by the bard, this Twelfth Night sings, it dances and it shares its warmly beating heart with everyone. A completely musical version, conceived by Kwei-Armah and Shaina Taub, with the latter responsible for all the brilliant lyrics and music, it was first seen at the New York’s Public Theater and Shakespeare Festival, and has lost none of its energy on its journey across the Atlantic.

Set in London’s Notting Hill district, whose annual Carnival weekend in August is a celebration of the country’s multicultural heritage, the story unfolds with a rapid pace and all the cut and thrust of a Renaissance tale well told. In little more than 95 minutes, this version of Shakespeare’s play warbles and strides its way from Viola’s arrival, to her disguise as Cesario, to her entanglement with the Duke Orsino and his unrequited love for Olivia, in whose house reside her steward Malvolio, and party people Toby Belch and Andrew Aguecheek. Maria, Fabian and Feste the Fool make up the numbers, and soon the whole stage is full of a singing and dancing community chorus from the local boroughs of Southwark and Lambeth. Like Kwei-Armah’s homecoming, this is all very celebratory and joyful.

Although Shakespeare’s original has an unmistakable strain of melancholy, this Twelfth Night is almost all unalloyed pleasure. Even when a hearse appears at the start, as Olivia mourns the death of her brother, the feeling is less of an arid desert than that of an oasis of temporary calm. If those who don’t know the original play might be perplexed by the references to Illyria (given that the production is clearly set in contemporary London), this is just one of those details that annoy me: if you are going to mess with Shakespeare why not go the whole hog? And, boy, does Taub mess with the bard. Apart from a few short dialogues, and some classic lines about music being the food of love, and some being born great, there is very little Renaissance verse in this version.

Instead, we have a gloriously embracing musical which radiates happiness in almost every song. Even when Gabrielle Brooks’s Viola laments that “I’m the kind of girl who never gets the guy,” you just know that, very soon, she will, she will. Having slipped on a smart suit and shed her luxurious hair, she’s ready for action. In no time at all Rupert Young’s rather hipsterish Orsino is keeping her close, and Natalie Drew’s Olivia is battling her eyelids in her/his direction. The gender fluidity of the story works well in a contemporary setting, although the finale—when the whole community joins in singing “If we can open our hearts to each other, what a better world it could be”—feels like a nostalgic look back at the “Make love not war” 1960s, when Notting Hill was more bohemian than Caribbean. Still, when the audience is on its feet clapping and shouting for joy, what’s not to like?

Touching, often rather moving, and overall utterly celebratory, the show features a scene-stealing performance by Gerard Carey as Malvolio, here presented as the boy who was bullied in High School, but who remained true to his ambitious spirit. However unShakespearean, Carey’s comic timing is impeccable and he effortlessly dominates much of the proceedings. Similarly brilliant is Melissa Allan’s Feste, whose voice has a raw abrasiveness which can go through you like a blade. While the tonal range of Drew and Young are more mature and softer, the drunks in the story, Martyn Ellis as Toby and Silas Wyatt-Barke as Aguecheek, are full-on comics. More nuanced are Gbemisola Ikumelo’s Maria and Jyuddah Jaymes’s Sebastian.

Co-directed with Oscar Eustis, Kwei-Armah’s opening show is a fulsome embrace of diversity and the pleasures of the street-dancing, gender-bending and mildly transgressing world of carnival. It is so full of fun that any po-faced criticism of its departures from Shakespeare’s original would be not only ungenerous but also rather beside the point. Like Bob Carlton’s Return To The Forbidden Planet, here, the bard is really just an excuse for licensed enjoyment and foot-tapping frolics. If the dancing, choreographed by Lizzi Gee all across designer Robert Jones’s cartoonish set, is a bit messy at times, what care I? Better to leave the theatre as a happy fool, than a foolish wit.

Twelfth Night is at the Young Vic until November 17 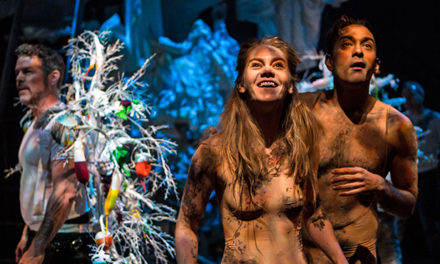