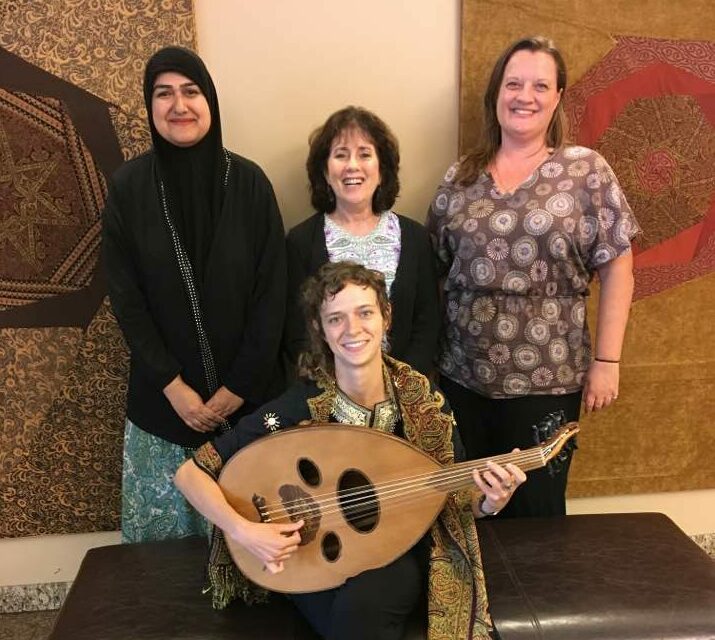 The music was audible before I entered the theatre. As I walked down the aisle to my seat,  the smell of incense hit my nose. Hanging center stage, a beautiful tapestry. Musician Lucia Thomas sat stage left in a chair, playing it out as if she were born to do so. The senses were being engaged, and the show hadn’t even begun.

How it all got started:

After the 2016 election, Chicago based Muslim storyteller, playwright, and speaker Rohina Malik noticed an uptick of hate speech in the U.S. and she wanted to do something about it. Rohina reached out to friends and colleagues to assemble the team of Kim Schultz, Susan Stone, and Lucia Thomas to form a sisterhood of power, presence, positivity, and perseverance.  Kim Schultz is a writer, storyteller, and speaker of the Christian faith. Susan Stone is a Jewish Traditional Storyteller. Joining these three is Lucia Thomas, a skilled musician trained in several traditional styles. Together, these dynamic women form Keeping Faith: Sisters of Story.

Opening in song, the three storytellers took to the stage from all around the audience. Their voices joined together to soothe the audience, focus the space, and begin the work. “Salaam, Shalom, Peace. Salaam, Shalom, Peace.” For the next 60 minutes, Malik, Schultz, and Stone rotated in and out of the spotlight to share stories from their respective faiths.

Susan Stone held the audience in the palm of her hand as she effortlessly entertained, inspired, devastated, and comforted them. Susan’s stories were perhaps the most based out of the traditional texts and they repeatedly reminded us of the importance of being kind to one another. “The best thing you can do is to do someone else a favor.” By sharing her gifts, Ms. Stone did everyone in the house a favor.

When Kim Schultz got her turn at the wheel, she put her foot on the gas and invited the audience to join her and insanely hilarious and tremendously vulnerable ride. Kim spoke from the heart, sharing stories from her life about pain and the supernatural, her search for Jesus “The Man,” and finding God when it feels like God can’t be found. Kim’s instantly likable persona partnered with her expert timing left the audience begging for more.

Rohina Malik was the perfect mix to bridge the gap between the other two storytellers. Malik tended to open with contextualizing the importance of the traditional story and then sharing it. She shared stories of motherhood (hers and others), of divine healing, finding the power within, and encouraged us all to take a real look to the heart of the matter.

Throughout the stories were musical interludes, accompaniments, and underscores. Lucia Thomas let the stories influence her song choices as she provided mood music throughout the work. A clearly gifted artist, Thomas sat surrounded by instruments to help her evoke a different context for each of the represented faiths. She switched with ease between violin, oud, and banjo while singing in a number of different languages.

A Journey through time and place

Near the top of the show, the stories are based in historic times or set in a location with a tie to a historic time. Stone tells of a Jewish man buried in an unmarked grave, Malik tells of Hagar’s journey to healing her child, and Schultz tells of a pilgrimage of her own. In the next round, Stone shares the teachings of a Holy Man, Malik encourages us to remain humble, and Schultz tells of a terrible accident and miraculous healing. In the final rotation, the stories hit home. The women lull the audience with stories of gentleness and beauty before they tackle the big issues. In one of the final moments of the show, Malik breaks the hearts of her patrons as she brings us closer to what we know to be true: the pain we cause when we let hate win.

In the beginning, the distinctions were clear. Each woman clearly served as a delegate for their own, and the audience had an easy time discerning who was who. As the show went on, the voices began to meld and the distinction and differences seemed to fade into the background. In a time when the easiest things to see are our differences, these women turned the world on its head and forced you to see the commonalities and invited us to remove the veils we wear on our hearts. 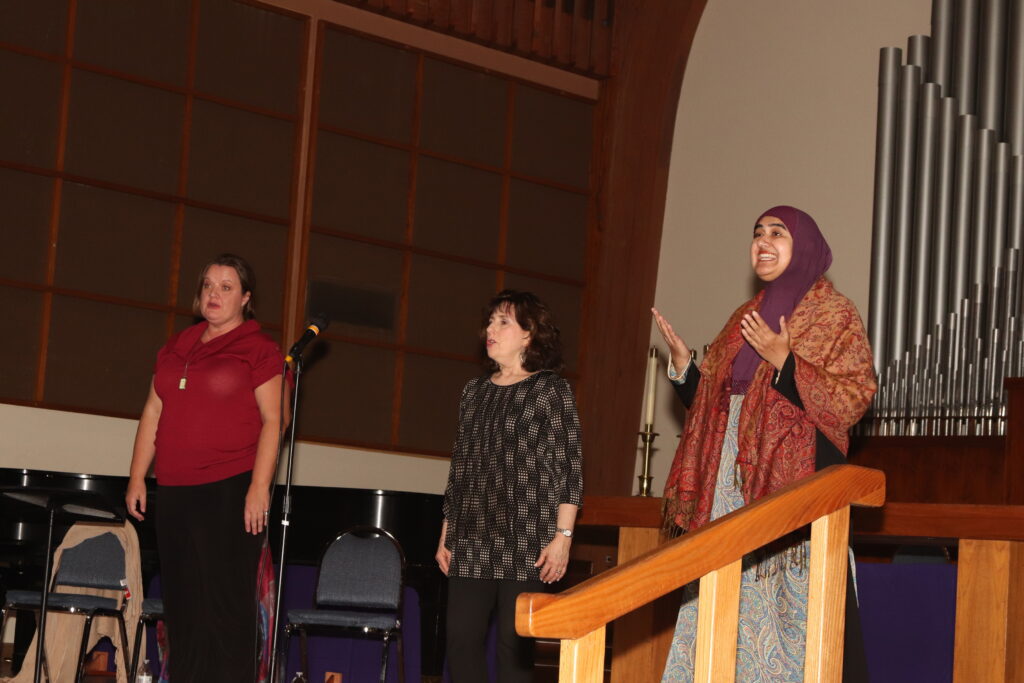 Schultz, Stone, and Malik during a performance of Keeping Faith: Sisters of Story

After the show, the women remained onstage for a self-facilitated discussion about the work. Having kicked off the night with their own discussion (where the audience served as spectators), the company of performers sat downstage and encouraged audience members to engage in conversation about what they had just seen. This co-exploration of themes and current events was a well-facilitated encouragement to continue our own conversations as we exited the theatre and re-entered a world more divided than the community we had just created. 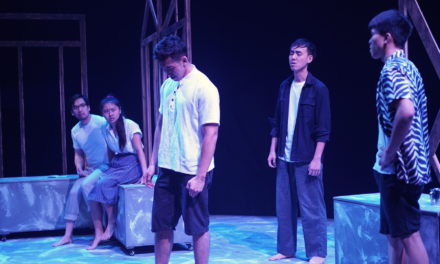