Art And Character, Or: I DO Care How We Go Down In History 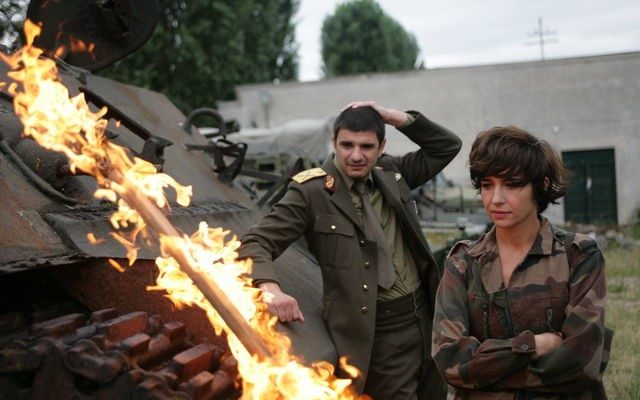 Ioana Iacob and Alex Bogdan in Radu Jude’s film "I Do Not Care If We Go Down In History As Barbarians." Press Photo

In a very recent film awarded the Crystal Globe at the Karlovy Vary Film Festival, the Romanian director Radu Jude frontally attacks an issue that remains at the core of the relationship of Romanians with their own history while analyzing the relationship between the artists and “the power,” something less discussed in the reviews of the film. This is a contemporary film, the action takes place in the present, and the film was launched in the year celebrating the Centenary–100 years since the Unification of Romania after the Second World War. So “the power” is no longer an oppressive, totalitarian regime but the democratically elected representatives of political parties. And yet, the dialogues between the representative of the current administration, in charge of financing the public reenactment of an historical moment on one side, and the young female theatre director who directs it, on the other side, spark memories of the times before the fall of the Berlin Wall, when ideological censorship was enforced on the activities of all artists in Romania.

Radu Jude chose for the reenactment a delicate moment in Romanian history: the 1941 massacre of the Jews in Odessa, ordered by Marshal Ion Antonescu, an extremely controversial figure of modern history whom Romanian nationalist supporters hold in great esteem. This is a moment brushed over in official history textbooks, a taboo subject in Romanian public life, something many Romanians are ashamed of or have guilty feelings about. Except for those who decided that Antonescu is a key historical figure, who happened to also do good things for his country, which means he can be forgiven for his horrid decisions. “It was the middle of the war, after all, and many Romanians died, too, because this is what happens in times of war” – is the most common vulgar explanation. Not unlike the discourse of the right-wing sympathizers in many European countries.

And then there is this young woman obsessed with the Odessa massacre: she is reading all the books about it, she digs for photographs, letters, memoirs, and all other materials relevant to that moment, so that she can direct a reenactment meant to tell the truth about the “great Marshal’s” deeds and reveal the Holocaust denial to which Romanians have clung for too long. The film becomes a disguised documentary in which real material connected to the events is shown, sometimes in long frames that hurt the viewer’s eyes and conscience, like the photo with hundreds of people hanging by the trees in Odessa. The woman almost feels too brainy with the quotes she gives all the time, even after a sexual encounter with her lover, who happens to be a pilot. She has an attraction to uniforms, as we can see in her exploration of the Museum of the Army, where preparations for the reenactment are done.

Actor Ioana Iacob plays the young, beautiful, and bold director with some distance from her role. Distance is dictated from the very beginning by the film’s director, who makes her introduce herself by her real name from the beginning and declare that she is playing the role of the director. This gives the spectator a postmodern feeling of being a witness and erases any possibility of identification with one of the characters. Jude is fighting the very rules of narrative films here, pleading instead for a type of intellectual debate which makes the viewer craving to jump in with his or her own opinion.

In the film’s last scene, in which we find her meditating and smoking after the reenactment, while the statue of King Carol I, the first Romanian king, can be seen behind her, rising up against the dark skies, someone calls her by her real name, Ioana, so the circle is completed. The constant presence of historical documents and artifacts is another feature meant to break the fictional red thread and render the viewer aware of his/her own presence in front of the screen, as well as suggesting that one has an obligation to do one’s own research before arriving at a conclusion about the facts mentioned here. Can Antonescu in any way be justified for what he did? Is the role of the Romanian army in what happened clear after so many years? And what can we do if–asks one of the extras at a party mid-rehearsal process while watching a piece of archival video material–we find out that we are great-grandsons of these criminals?

The young woman is repeatedly forced into heated discussions about Romanian history by some of the extras she is using for the reenactment, and at some point, she is accused of being anti-Romanian because she reveals things nobody talks about, as they are too shameful. The extras are a great study in collective thinking as it can be detected in contemporary society: there is a lot of racism (why are the gypsies involved, they ask, ignoring that the gypsy population were also victims of the Holocaust), there is misogyny (they cannot forgive or forget that the director is a woman, still a rare occurrence in Romanian theatre) and, ultimately, there is pure hate in their remarks. As it happens on the social networks, some of them are more vocal, and some are rather cowardly in expressing their feelings, with no real arguments involved in either case.

Another series of debates is generated by the constant attempts at censorship made by the representative of the City of Bucharest (played by a famous Romanian theatre director, Alexandru Dabija, a fetish actor for Jude), who is trying to change the young director’s idea about representing the historical facts “as they were.” He is even willing to “negotiate” the representation of history, as he gives her permission to tackle freely with another period in history:  “You can do anything you want about the crimes of communism!”

he concedes at some point, trying to make her renounce the scene about the burning of the Jews by Romanian soldiers in Odessa. Maybe the most shocking discovery for someone familiar with the “tango” of censorship in Romanian culture before 1990 is the fact that the same steps are taken by the power today to enforce their ideas. They threaten to coerce the artist, cut her funding or make sure that she never works again. The only counterargument she can give, unlike in the old times, is that she will provoke a public scandal with help from the press if they take such actions, but even the freedom of the press in post-communist societies is something which needs to be discussed.

The only way for the young artist to move on in accord with her ideas, as the actor playing the Marshal suggests, is to “say yes to what they want and then do what you want,” a very popular Romanian saying, both before and after 1989. An expression of the local strategy implied by those who wanted or want to “navigate the system,” this saying well describes the murky, chaotic state of facts in a society under construction where democracy is not yet properly installed, a mixing from which one can only hope that a new, better world will arise. The fact that the young woman is not comfortable with this solution–even though she finally applies it–is a sign of the conflict between two different mentalities and two ways of understanding things and dealing with them in real-life situations: one that lingers as the best solution in the past; another that involves open resistance and public exposure of the censors.

In real life, the second solution is favored only by (some of the) young artists, who became adults in a free world but are the most exposed, as they have yet to prove their value and be taken seriously. Their careers are at stake when deciding to take action like this, which complicates things even more and at the same time builds character. Speaking of character, Jude himself is one of these new artists, and his is an extremely necessary film, not only for Romanian society, still in denial about its own role in the history of the last century, but for all European countries, as it speaks not only about the past but also about a very worrisome present.

“I do not care if we go down in history as barbarians”–a quote from Marshal Antonescu used as the title of this great film–is a prophetic sentence. One can, unfortunately, imagine it uttered by any other “great commander” in today’s world, as we have entered a historical moment very similar to the one that Radu Jude’s film focuses on. This is one artist who definitely cares how we go down in history.

I Do Not Care If We Go Down In History As Barbarians premiered at the 2018 Karlovy Vary International Film Festival.