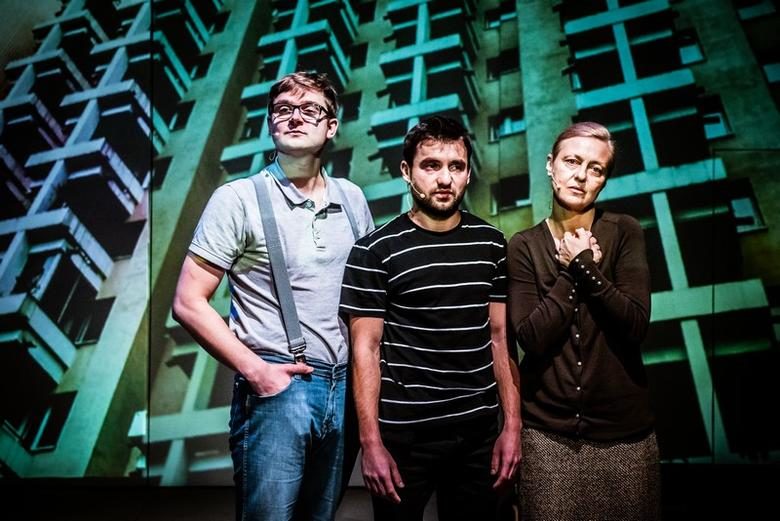 During his residential stay (May–June 2016), the Polish artist and performer Paweł Korbus (1983) carried out a remarkable project entitled ID–Influence Diagram in the Garden Centre for Independent Culture in Banská Bystrica. As an action artist and a performer Korbus consistently interlinked physical theatre, performance, body-art and mainly video-art in his production.

The young Polish artist exclusively focused on Banská Bystrica as a place for his residence stay–with its unique location in the heart of Slovakia and its cultural-historical context. Banská Bystrica became an important center of the anti-fascist resistance movement, the Slovak National Uprising (1944), during WWII. In the times of the former regime, it held a status of an important bastion of communism. There is no wonder that the Polish artist was inspired by the symbols and emblems of the post-communist era in the form of various memorials and architectural cultural heritage of Banská Bystrica. Without any previous knowledge of the specific cultural memory of Banská Bystrica, Korbus managed to penetrate its atmosphere.

Korbus started his residence stay in the Garden with an interactive installation entitled It’s All Good, But We’re A Bit Afraid Of Love/War… in which he introduced his cardinal artistic leitmotif: fear and love (an interactive installation with the same Polish name Jest Fajnie, Ale Trochę Boimy Się Miłości/Wojny… was carried out at the Baltic Gallery of Contemporary Art in the Polish town of Ustka in December 2015). Korbus mostly presents the lenses of the fragility of reality perception through the polarities of fear and love. He was interested in what we fear in the times of relative peace, or what the most prominent trigger of fear is in the conditions of growing tension. The visitors of the interactive installation were presented with a panel on which they could write down their own images of fears in their basic, as well as wide-ranging forms.

What dominantly triumphed within the presented performance of the residing artist in a public city space was the installation of the object Influence Diagram in the form of a construction of a pyramid. The author was clearly inspired by a construction of a huge tumulus in the famous Czech Oscar-winning film The Shop On Main Street (1965) directed by Ján Kadár with a guardsmen’s slogan “Life for God, Liberty for the Nation.” The installation with flags on top variably turning under the influence of flowing winds could easily be perceived ambiguously. The four flags on the top of the pyramid presented possible, relative changeability of influence of regimes, changing systems, ideological paradigms, etc. Through its regularity, this geometrical form evoked concentrated rationality, sternness, and symmetry of sorts. This attractive pyramid clearly corresponded to burial mystique as an imitation of various memorials from the totalitarian regime. Painted white, it made everybody believe in paradoxical peacefulness, cleanliness, and hope. In the same way, the indifferent white flags as an important kinetic element on the top of the pyramid adequately expressed the turbulent variety of life’s cyclic nature.

Another public-space installation/performance of Korbus entitled Daj S’pokój (Give Me Calm/Peace) was closely connected to the clearly defined leitmotif of peace. It consisted purely of white shirts raised on the flagpoles in front of the Museum of Slovak National Uprising Museum as symbols of victims and their appellative resonance of silent memento (the Polish word “spokój” means calmness while the same word without the “s” at the beginning, “pokój,” means peace). The number of shirts was 33, the same as the number of flagpoles, and that is the number of countries actively participating in the Slovak National Uprising, which was a clear signal of anti-fascist resistance, or resistance against any form of intolerance. The polysemy of fluttering shirts on the flagpoles (obviously instead of flags) was predominantly connected to the white color being a symbol of cleanliness. The installation was preceded by a performance of ritual shirt ironing and subsequent rising of the shirts on individual poles.

Korbus’s intensive activity is remarkable because his events on the exterior were often of an interventional character, or they were permanent installations or performances. The spectator could partly catch their processual character. The linking points of Korbus’s creations were ritual–performance–process which together integrated in individual realizations of a more conceptual character. These were various kinetic-optical objects placed around Banská Bystrica (raising of shirts within the already mentioned performance Daj S’pokój or installation of the Influence Diagram object.)

It is more than certain that Korbus drew his inspirational matter from the environment of his residential stay. The legacy of his influence was of strong performative character. What dominated in this case, was the process of happening, the act of realization, e.g., in the sense of letting something make an impression, (non)reaction in passive resistance, etc. For some, the individual events of the artist in the area may have meant strict intervention or even ascetic self-sacrifice in an unpleasant irritating tension (duration of static fluency.) We could straightforwardly perceive in such a way specifically the performance How To Get Red. The performer got himself sunburnt during the performance lasting three hours at a base of a former V. I. Lenin’s statue. This performance inspiringly corresponded with the sensitive perception of the artist and his sensitivity to the individual, actively present (often forgotten) post-communistic residua of a specific cultural spot.

It is necessary to point out that an important part of Korbus’s residential stay in the Garden Centre of Independent Culture consisted of a workshop with Banská Bystrica’s Academy of Arts students Barbora Horská, Adam Engler and Lucia Devečková entitled Influence And Self-Determination aimed at performance art and physical theatre. The result was several realized interventions in the exteriors of Banská Bystrica, such as Barbora Horská’s Stred/T Nad Európou” (in Slovak, “stred” means centre while “stret” means meeting) in an almost inaccessible part of a waste dump behind Europa shopping mall with the aim of cleaning it up or rather bringing about its action transformation.

The Polish performer had six weeks to ideally survey the surroundings of the city, its atmosphere, urbanism, sociological climate, etc. The residing artist’s intercultural competence was, by all means, an important enabler of it all. Due to it, he was able to uncommonly incorporate “otherness” into certain perception and reflection of culture. He allowed the surrounding factors to let him get inspired. In an experimental way, he followed the reflection of the outer reality on himself. That could often be synchronizing or, on the other hand, irritating in the basal communicative relationship. His resulting object of the Influence Diagram pyramid will eventually be permanently exhibited in the Garden and with good prospects will also travel to various places of independent culture centers around Slovakia.

This post originally appeared on East European Performing Arts Platform on May 10, 2017, and has been reposted with permission.