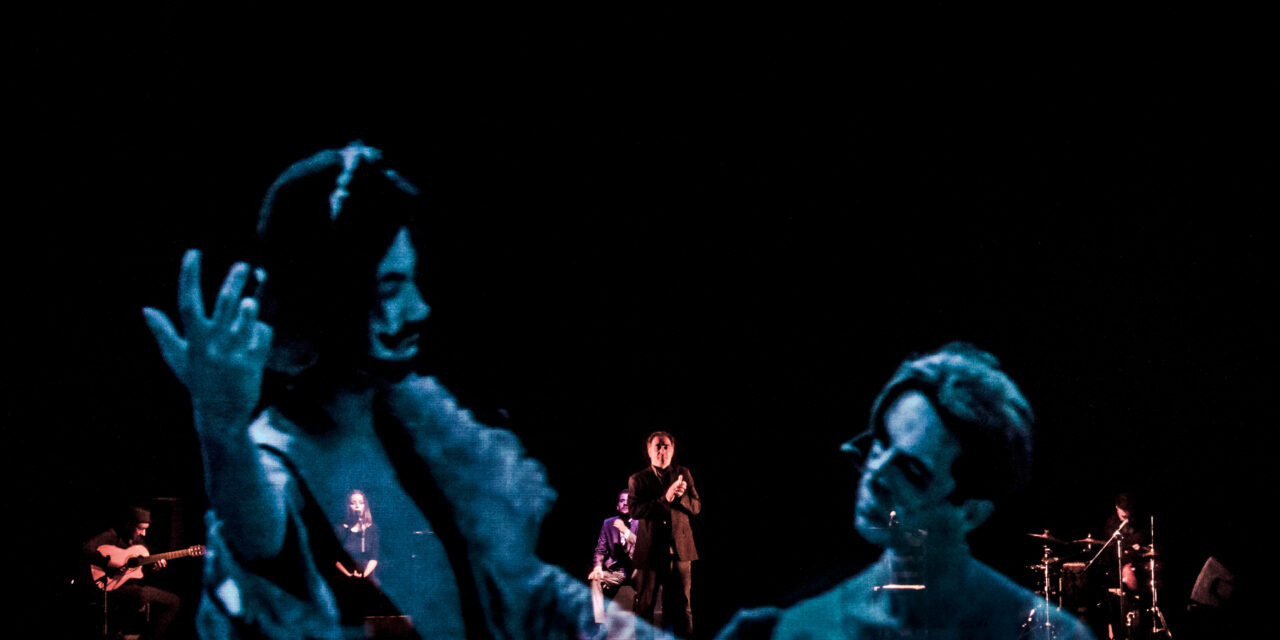 Federico García Lorca, Spain’s best-known twentieth-century dramatist and poet, has been conjured on stage on multiple occasions by writers, choreographers and directors as diverse as Nilo Cruz, Lindsay Kemp, Lluís Pasqual, Peter Sellars, and, most recently, Miguel del Arco. One of the early martyrs of the Spanish Civil War, he became a powerful icon for a progressive Spain that was cut down with the victory of the rebel forces in 1939.  Lorca’s life and death might have sometimes eclipsed the work but Pep Tosar’s Federico García opts to focus on the intersections between his writings and biography. Melding flamenco song and dance with Agustí Torres and Pep Tosar’s moving images, alongside extracts from Lorca’s artistic output, the production explores key motifs and tropes in Lorca’s artistic output and how these relate to the wider landscape of Granada in which he grew up and the enduring legacy of what he represented as a writer and public intellectual.

First seen at Barcelona’s Grec Festival in 2015, Federico García now returns for a third run in the city, playing for a month at the Goya theatre following a tour across Spain. The production has enjoyed significant and commercial success and it is not difficult to see why. Lorca remains one of Spain’s most powerful enigmas; the writer killed in his prime whose body remains to be found. Tosar may not seek to provide any “new” information about Lorca but his piece willingly acknowledges that Lorca remains unknowable, the partial image we have pieced together from his writings, the grainy black and white photos and extant film footage, the views of critics who have assessed his work and the memories of those who knew him. Lorca may be a constructed persona, but he continues to fascinate, seduce and mystify.

Tosar, working with Evelyn Arévalo, crafts a collage that moves chronologically across Lorca’s life and writings.  Beginning with an audio recording of the Nobel Prizewinning poet Vicente Aleixandre reflecting on the irresistible power of Lorca’s persona, this is a production where the writer is constructed through the bodies and utterances of others. Aleixandre’s words are projected on a giant semi-transparent screen that stretches across the width of the stage. The screen mutates to show a path—the implication that this is the path leading to Víznar where Lorca was shot on the morning of 18th or 19th August 1936 after his arrest at the house of right-wing friends where he thought he would be safe. The sound of a solitary flamenco guitar (Rycardo Moreno alternating with Marc López and Tomás Lorenzo) underscored by the percussive drum base (David Domínguez alternating with Joní Sánchez) pierce the silence. It’s the sound of a lament, an elegy for a life lost.  The shapes of three further figures can be made out from behind the screen. A singer sitting in front of a microphone (Mariola Membrives alternating with Ana Brenes), a male narrator who weaves together the different fragments from the writings (Pep Tosar alternating with Chisco Amado) and, at the very back of the stage, standing on a small staircase, a male dancer (Pol Jiménez alternating with Rafael Ramírez) whose suited attire and dark hair evoke that of Lorca. Lorca is here a dismembered entity constructed through words, song and dance.

The live performance is accompanied by a screen commentary edited from interviews with various stakeholders in the Lorca industry all filmed individually as talking heads on a moving train. In addition, the sounds of the train permeate the whole production, a soundtrack that accompanies the flamenco score which transports the spectator on their own journey. Lorca’s niece and goddaughter Vicenta Fernández-Montesinos García frames her recollections of him with the assassination of her father who was also unlawfully killed by insurgent soldiers in the early days of the Civil War. The critic and editor Mario Hernández, the academics Allen Josephs and Domingo Ródenas, the biographer Antonina Rodríguez, and the poet Juan de Loxa all comment on facets of his writings, life and afterlives. Josephs alludes to Lorca’s poeticization of Andalusia, Rodrigo to the controversy of Yerma, Ródenas to Catalonia as his link to Europe. Structured in nine episodes, the piece is largely chronological, working its way through his childhood in Fuentevaqueros, the family’s move to Granada and Lorca’s embracing of cante jondo, the years in Madrid, the influence of Catalonia on his work, travels to New York and Cuba, the return to Spain, the cultural and social developments with the Second Republic and the beginning of the Civil War. The train motif is one that resonates in the production’s final section as the five speakers narrate Lorca’s journey back to Granada and compile a chronology of his final days. At the production’s end, an image of the each of the filmed interlocutors appears as a reconstruction of the photo of Lorca on the train that took him to Granada as Civil War broke out in Spain. Lorca thought that as a poet he’d be safe in Granada. He was wrong.

Pep Tosar functions as the piece’s de facto narrator, folding together the extracts from Lorca’s writings that give Federico García its dramaturgical shape.  The focus is on lesser-known texts—fragments from Doña Rosita and the Lament for Ignacio Sánchez Mejías which testify to loss, the disorientating urban universe of Poet in New York, the lyrical register of this early Impressions and Landscapes, written when he was just seventeen. There are also segments from lectures and letters that speak to the public and private personas. The link to landscape is an important one, reinforced through the images of the fields that flash by the windows in the train carriage where the interviews take place. Tosar also gives voice to others who have helped shape understandings of Lorca, including Buñuel and Dalí.

Tosar crafts a stylish production where the footage merges with lush images of the landscape of Granada. Lorca’s performance as the shadow in Calderón’s auto sacramental Life is a Dream dances across the screen, a reminder of Lorca’s work as a director and social educator during the Second Republic. Images merge as the projected footage fuses with Tosar, Membrives, Jiménez, Domínguez and Moreno. Even the speakers on the train have a ghostly quality. Juan de Loxa died in December 2017 and his reflections on Lorca’s death acquire a new significance in light of his own passing. Lighting is used to frame Jiménez as an ephemeral presence who dances across time and space. At times he fuses with Lorca projected on the screen—most memorably at the production’s close. Indeed, Tosar’s production presents multiple Lorcas—each speaker has their own perspective; each musician enunciates their own melody. The format may become a little predictable as the production races to its end, but there’s a strong pedagogical dimension to the piece. Lorca’s corpse is one of over 100,000 lying in mass graves across the length and breadth of the country and a reminder of the Civil War’s lasting wounds and divisions. The focus on Federico García —his first surname instead of the maternal surname through which he is better known—points to a need to look beneath the brand name through which he has been popularised. The result is a stage collage that demonstrates why Lorca matters and why he continues to function as an icon of modern Spanish culture and a symbol of Spain’s need to come to terms with the legacy of its Civil War and its aftermath.

Federico García plays at the Goya theatre Barcelona until 5 May.