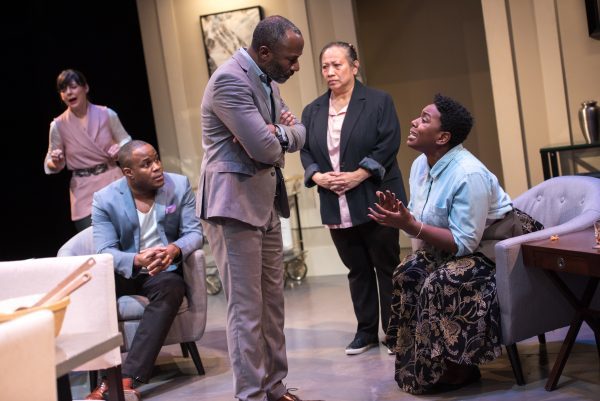 Shelley Liebembuk reviews Calpurnia, a co-production between Nightwood Theatre and Sulong Theatre of Audrey Dwyer’s considerations on race, class, family, and the Finch family of To Kill A Mockingbird renown: 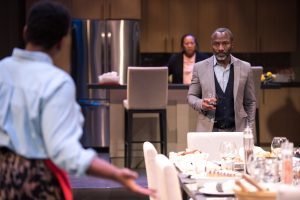 In Calpurnia, playwright Audrey Dwyer beautifully takes up the dinner-party-gone-wrong trope, laying out an unsparing exploration of reckoning with the blind spots of privilege in the pursuit of social justice and effective allyship.

The play opens onto the hearth of a wealthy Jamaican-Canadian family, where we meet 20-something daughter Julie (played by Meghan Swaby) sitting at the dining room table in her pajamas and struggling to write her screenplay. Julie is the catalyst of the piece. While the other members of the household are attempting to construct a perfectly quiet Sunday, culminating in a flawless dinner party, Julie dares to be openly angry about racism, to question her father’s sexism, and even to critique the presumed heroism of Atticus Finch in Harper Lee’s classic To Kill a Mockingbird by writing her own screenplay from the perspective of Calpurnia, the Finch family maid. 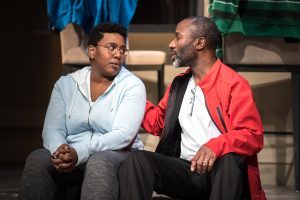 It is, in turn, Dwyer who boldly dares to create a character who must negotiate internal contradictions and hypocrisies. In the press release, Dwyer says that, “as a Black woman who creates theatre, I wanted to create characters who make mistakes while growing into their politics.” As the play goes on, it is in Julie’s fierce determination to give voice to Calpurnia that we uncover the problematic contradictions in her allyship, specifically in her relationship to Precy, the family’s long-term Filipino housekeeper.

We discover Precy (played with wonderful detail by Carolyn Fe) in relationship to the space, through her constant physical business of moving from kitchen to dining table to foyer and back, always actively cleaning, arranging, and serving.

Precy’s laboring body is carefully staged to meld into the background, to appear effortless–except for the few moments when we are purposefully made aware of her aching back, her tiredness, her frustration. As Precy moves about the stage, Julie and the other members of her family take Precy’s labor for granted, at once demanding she be ever-present to wait on them and rendering her invisible. Strikingly, we too as audience participate in decentering Precy, for, though she is almost always on stage, our focus tends towards the heated dialogue between other members of the household. 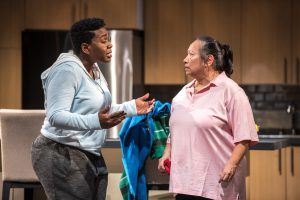 The significance of Precy’s presence—and its permanence—often comes to the fore only when the other characters have left.

Julie considers Precy to be a subject of research and wishes to understand her perspective in order to voice Calpurnia. Yet, in a scene where Julie interviews Precy about her work, she is at once aggressive and dismissive, capturing the unintentional but very palpable violence of false empathy and misconstrued allyship. Julie’s barrage of questions—including a flippant dismissal of Precy’s ability to actually enjoy her job—fails to take into account Julie’s own imposing positionality, and that her interrogation meets Precy “on the job,” having to maintain her working position by remaining muted and deferential. Moreover, the scene is staged poignantly across the kitchen island, with Julie sitting comfortably on a high stool while Precy stands on the other side amongst the dinner prep.

The brewing tensions around this relationship explode when the family’s dinner guest finally arrives and Julie re-enters playing a stereotyped Mammy figure, claiming to be the family maid. Julie’s embodiment of Calpurnia seems to aim at disrupting the dinner party’s artifice, and to force her family to contend with the transhistorical violence of intersectionality. And yet, through her performance, Julie also inadvertently caricatures and displaces Precy—the contemporary laboring figure who has been actively cooking the dinner, setting it up, and now must serve it alongside Julie’s actions. The extended dinner scene that unfolds is a complex and striking one—too intricate to do justice to in summary—and it forces the characters, as well as the audience, to confront the underlying prejudices and blind spots of their and our social interactions, their and our own selves. The script offers a final surprise in that it doesn’t let the drama end with dinner. It forces us to stay with the unsettling aftermath, and reckon with the leftovers.

This article originally appeared in Alt Theatre on April 12, 2018, and has been reposted with permission.