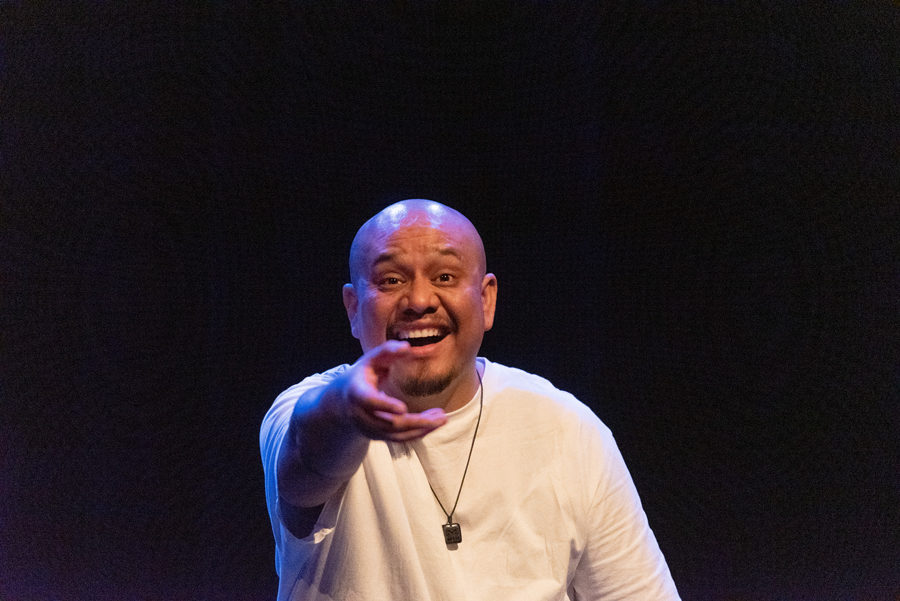 Alex Alpharaoh has brought WET: A DACAmented Journey, his moving, comic, and political one-man show, to ArtsEmerson in Boston at the end of his first cross-country tour. This autobiographical piece could not be more timely given the strong animosity against Latinos, particularly the poor, that exists in the Trump administration. The work, directed by Kevin Comartin, was first enacted in 2017 at the Ensemble Studio Theatre in Los Angeles where it was highly successful. The Los Angeles Drama Circle nominated WET for best play and awarded Alpharaoh the prize for best solo performance.

Alpharaoh studied dramatic writing with stage- and screenwriters. He began his formal actor training at UC Irvine. In addition to his acting and writing, he founded SP!T: Spoken Word Theatre, a Los Angeles company, where he also serves as director.

Despite his accomplishments, he lives with the danger of being expelled from the US. He was born in Guatemala and brought to the US at the age of three months by his mother then fifteen who entered the country illegally. When his father died, she married an American and became a citizen. His siblings all born in the US are American citizens as is Alpharaoh’s teenage daughter. Living as an undocumented immigrant without papers, he was unable to get any official documents including a library card, driver’s license, work permit or social security account.

However, he did manage to find work albeit unlawfully. In 2009, in his tenth year as a social worker at a psychiatric nursing home, he discovered one of his patients was beaten by a nurse’s aide whom he reported. Alpharaoh’s good deed eventually led to him being fired and taken to court where he was fined $1,800 for having given a false social security number.

His life changed in 2012 when President Barack Obama created DACA, a policy that permitted illegal immigrants who had come to the United States as children to apply for a renewable two-year program. DACA allowed him to get a driver’s license and social security. Donald Trump’s election in 2016 put an end to Alpharaoh’s hopes of having a secure American life.

Ultimately, he decided to apply for advance parole, a document issued to aliens who do not have a permanent resident status which in theory allows them to reenter the US after a trip abroad. DACA recipients are given only three reasons to make the request: education, business, or humanitarian. Since his grandfather in Guatemala was dying of cirrhosis of the liver, he was accepted for humanitarian reasons. He used the trip to renew his Guatemalan passport.

Though Guatemala was a pleasant surprise and he enjoyed meeting his relatives, particularly his grandfather, he was very anxious during his stay for fear that he would not be authorized to return to the US, his home, the only one he had ever known. When he landed at the airport in Los Angeles, he was shaking with fright as he went through customs.

When Alpharaoh wrote Wet: A DACAmented Journey his friends and colleagues were afraid of what might befall him if he performed it. He believes that the play’s importance lies in its possibility to change people’s minds about immigrants.

Alpharaoh is a very talented actor who plays approximately twenty roles in the show, all of them well. His own personage is divided into three: Anner, which is the actor’s first name, is the principal character; Alex narrates, and Alpharaoh is the poet. He moves well, is very expressive, and builds a strong bond with the audience. That the show is in the three-quarter round adds to the intimacy. The play is written in a non-linear manner that is engrossing. While some of the text is in Spanish, there are subtitles for the non-Spanish speakers.

This article was originally published in Capital Critics’ Circle on November 18, 2018, and has published with permission.