Written by Katrina Holden-Buckley | 18th May 2017 | Boston, Theatre and Opera 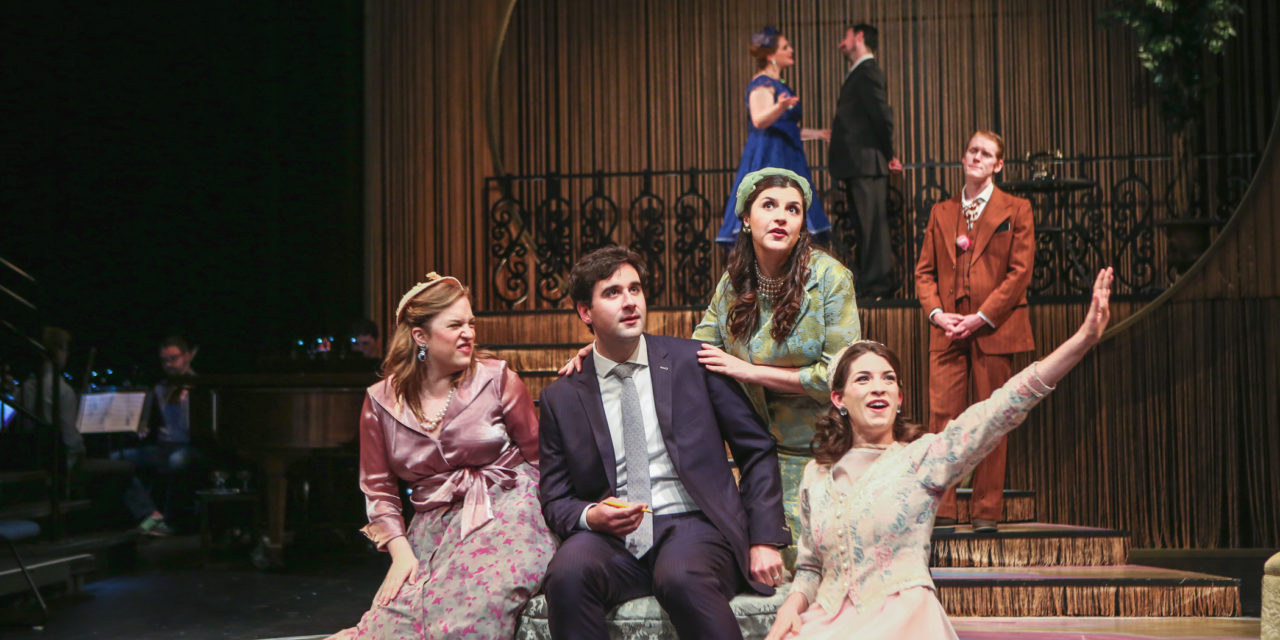 Boston Opera Collaborative’s La Rondine: Remix opened on Saturday May 13th.  This abridged version of the Puccini’s 1913 opera, (The Swallow), was billed as a “90-minute reimagining of Puccini’s operatic masterpiece.”

Productions by BOC have been leaner in the last few years as the company continues to carve out its identity through quite a bit of growth.  In addition to producing dramatically compelling work, part of the company’s mission is to give young artists, emerging from some of the top conservatories, opportunities to perform roles in the standard repertoire.  BOC has staged several piano reductions of operas in recent history, likely to defray the cost of paying an orchestra, as well as due to a dearth of reasonable venues with orchestra pits.  The result has been a laser focus on tight, emotional musical drama.  Saturday night’s production at Central Square Theatre featured an arrangement for instruments with Musical Director Brendon Shapiro on piano along with the Glenside Quartet, a string ensemble.

The space at The Central Square Theatre in Cambridge is essentially a large, black box with the audience in bleacher style seats on three sides, and the set, designed by Andrea Nice, was impactful and elegant.  Set in the 1950’s, a large staircase led to a balcony of subtle gold fringe denoting the living quarters of a wealthy man and his courtesan in Paris;  it transferred to a café and to an inn on the Riviera.  Small apartment furnishings were moved for each scene change by actors themselves.  In the center of a watercolor ring painted on the floor, Stage Director Patricia-Maria Weinmann had the characters moving about beautifully when not also utilizing the curving staircase.  The opera felt intimate and compelling in this setting, despite the Puccini score lacking the characteristic lushness of a full orchestra.  Costumes designed by Amelia Fitch were striking and reminiscent of An American in Paris.

Puccini himself had trouble deciding on a final ending of the several versions he’d written before his death, so it’s no stretch to make cuts and revisions as the company did.  Magda, a courtesan, spends much of the first act longing for a love like one stolen night of dancing from her youth.  She gets to explore the possibility of something like it when she meets and runs off with Ruggero, a young man sent to her patron’s Paris home.  Ultimately, Ruggero is looking for a woman of purity to make a family with, and she feels too stained to continue on with him.

Weinmann has cut a few non-essential scenes and kept the focus on Magda by placing a section of the first act at the close of the opera to emphasize Magda’s cyclical return to her life of remembrance. The pared down scenes and placement of Magda’s final musings were effective overall in positioning the story from Magda’s view.  She remains in the same Paris apartment with the passionless Rambaldo, remembering unrequited love in both the beginning and end.  Omitting the confrontation with Magda and Rambaldo at the café though, seemed to lower the stakes for her character in a way that made her revelation to Ruggero somehow less emotional.  There is something missing in weight when we don’t see her confront the consequences of her life and identity in Paris.  This lack of weight may also be that the character’s sordid past is no longer the scandal that it was at the time of the opera’s composition as well as in the repressive 1950’s.  Contemporary viewpoints on female sexuality likely take some poignant significance away from her confession. 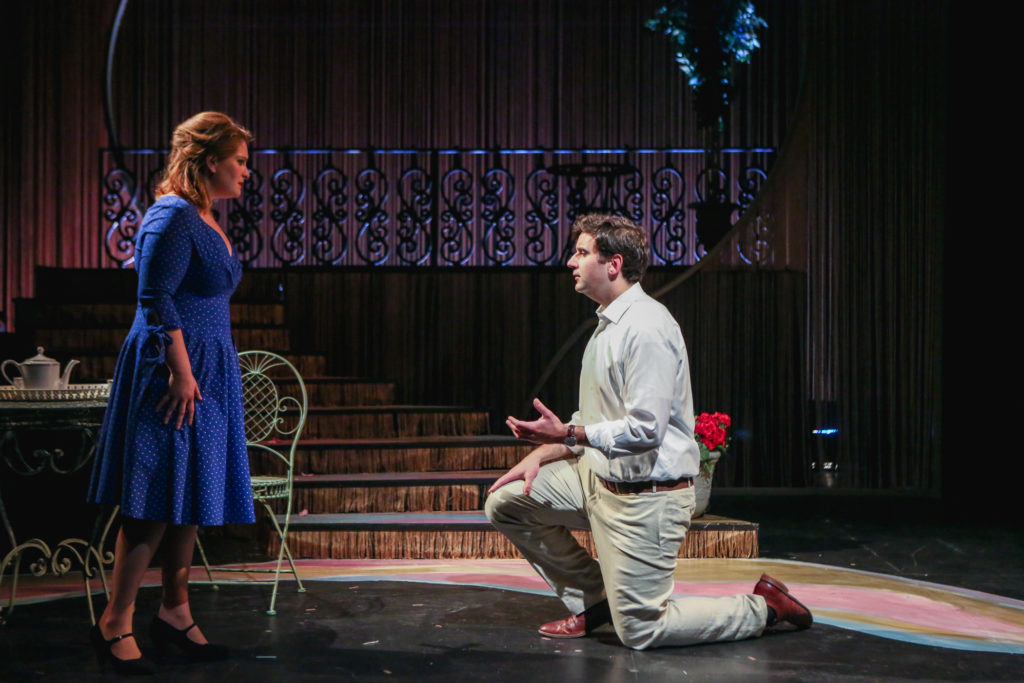 One of the big questions of the opera is whether Magda will soar like the swallow toward a life of romance, as it projects in her palm reading.  If Magda, the character, didn’t end up soaring, Jessica Jacobs leading the cast as Magda certainly did.  We knew this from the first act’s formidable interpretation of the opera’s most famous aria, “Ch’il bel sogno di Doretta.”  Jacobs truly understands Puccini stylistically and her full voice and phrasing are simply gorgeous, ebbing and flowing the way the composer intended.  Jacobs’ facial expressions were particularly captivating, and she took us on her fond, emotional remembrances with her.

Puccini asks much of his lead tenors, and this role is no exception.  Fran Rogers as the naïve Ruggero truly blossomed in his higher register.  He showed no signs of tiring in the demanding sweeping lines shared with Jacobs, however, in the lower end of his range the vibrato wasn’t consistent and the tone didn’t shine through as much as in the top.  Nevertheless, he was believable in every bit of his sincere passion for and misunderstanding of Magda.

Joshuah Rotz, as the poet Prunier, produces an easy pinging tenor, but his acting was a bit over the top for the role.  Jennifer Caraluzzi was perfectly cast as the defiant, but beloved maid, Lisette.  There are certainly enough of these roles in the opera canon that she could do justice to any of them with her sparkly, agile voice and particularly, her beautiful floating pianissimo high notes at the end of the second act.

Samuel Bowen, as Rambaldo, is a strong actor and understated foil to Prunier, with effective expressions seen from the upstage stairs as commentary on the after-dinner scene.  Though not a showy role, Bowen displays a fine legato and a warm timbre. 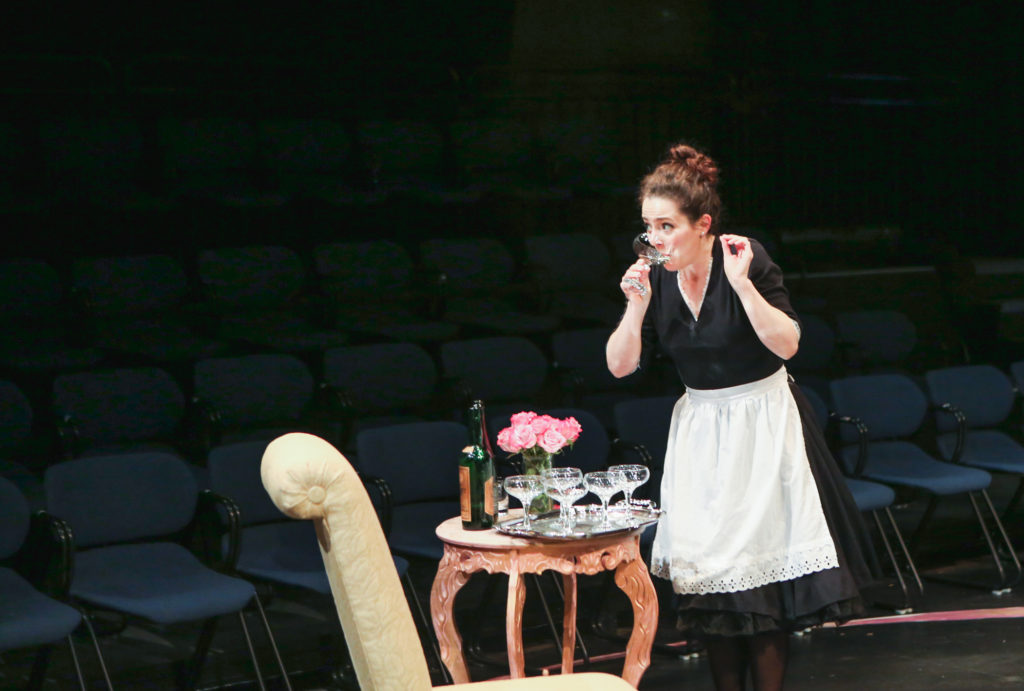 As a trio of supporting female characters, Rhaea D’Aliesio, Carley DeFranco, and Susannah Thornton were all vocally solid and quite literally twirled enthusiastically about the stage, participating actively in Magda’s current life and dreams of the past.

If La Rondine: Remix has any major problems, it’s that it appears as part of an over-saturated “May Festival” by Boston Opera Collaborative, and perhaps that is why it suffered from somewhat low attendance on opening night.  Though the company is offering several interesting one-night performances, audiences shouldn’t miss a chance to see La Rondine: Remix, one of Puccini’s less frequently produced pieces in an intimate setting with a gripping cast of performers.

Boston Opera Collaborative’s La Rondine: Remix runs from May 13th-21st.  It is sung in Italian with English supertitles.  https://www.bostonoperacollaborative.org/